Emily Ahrens (Lüssow) is an aspiring, and if the truth be told, not particularly good actress. She struggles even to get through auditions, until one day she gets an offer that seems too good to be true. 70,000 Euros for three weeks’ work – two weeks of rehearsals and one of shows – as part of the Performaniax theatre troupe. They are an avant-garde group, whose piece consists of a series of interactive “stations” designed to take the audience out of their comfort zone, by confronting them with taboo subjects like drugs, racism and homophobia. The show is overseen by a mysterious, almost absent director, and clearly very well funded from an equally cryptic source. The performers are as odd as you’d expect, some adopting a creepily method approach to their topics. “Kunst darf alles!” is their oft-repeated creed, which translates (per Google) as “Art can do anything!” The deeper we get, the more that phrase seems like a threat than a promise. 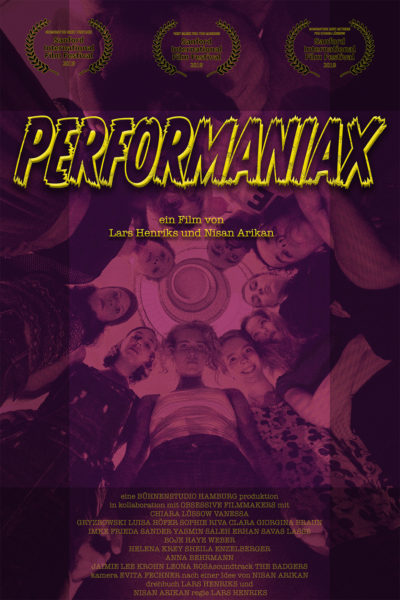 I “enjoyed” my share of performance art theatre in London during the nineties. Have to say, I found what we see of the Performaniax performance rather weak sauce. I certainly wasn’t offended, or even particularly challenged, especially with the distancing resulting from the format. [The audience reaction is occasionally amusing] Rather more interest comes from the shifting backstage dynamics. Emily rises from being a naive rookie, taking over the most illustrious station (the one dealing with sex), to the clear disgruntlement of the existing player. It’s a backstabbing environment, made worse by the vicious “notes” submitted from the director after the troupe’s performance on their opening night. In the final reel, the film changes tack dramatically, as Emily’s friend and agent gets some disturbing information about the Performaniax’s history, and tries to get her client out of there. When combined with Henriks’s fondness for colour filters, the movie suddenly feels like a version of Suspiria, with theatre replacing ballet.

I do wish this aspect had shown up earlier, since it feels rushed, going from zero to resolution in 15 minutes. However, this is at least somewhat in line with Henriks’s other works: a late shift in tone appears almost a trademark. The performances are a mixed bag. It’s difficult to play an actor, because it adds a layer of meta-portrayal. I think Lüssow nails it well, especially in terms of her character’s development. Emily “grows” into a self-assurance that was nowhere to be seen in her opening audition. She finds herself in a way that, from some perspectives, may not exactly be a good thing. The rest of the cast aren’t as effective, in part because the parts they play seem largely defined by a single characteristic, offering less room for interpretation or modification. Hanna (Saleh), the show’s director, comes over best, perhaps because she is seen least. I sense familiarity with the German theatre scene may be of some help with nuances of the content. Yet likely no more so than you need a love of ballet to appreciate Black Swan.