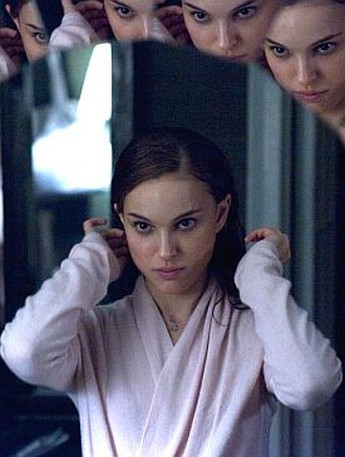 I think I preferred this when I saw it before, and it was called Showgirls. While I’m not the first to have noticed the similarities, it’s an interesting topic: yet Showgirls got the Razzie, while Swan looks a likely Oscar contender. Ballet dance = high art; lap-dance = low art? Natalie Portman != Elizabeth Berkeley? Breasts vs. hallucinations? Discuss… There’s certainly no shortage of histrionics, bitchy snarling or lesbian canoodling in Aronofsky’s take on the story of an ambitious dancer, who finds her way to the top barred as much by her own psychoses and the interfering demands of others, as any deficiency of talent. It focuses on Nina (Portman), who is duelling with Lily (Kunis) for the lead role in a new production of Swan Lake under the perfectionist ballet-master Thomas (Cassel). He sees Nina as ideal for the white i.e. “good” swan, and Lily as perfect black swan material, but wants to use one ballerina for both roles. As the pressure mounts, Nina begins to crack under the strain, and believes Lily is trying to sabotage her. Will she hold on to her disintegrating sanity long enough to get through the premiere?

Comparisons to Showgirls aside, this feels like a combo-pack of Aronofsky’s previous films, Pi and The Wrestler. You have the mental breakdown of the former, combined with the ‘suffering for your performance art’ of the latter, and the ambiguous ending bears more than a slight similarity too. I’m surprised he didn’t throw in Kunis and Portman on either end of the Requiem dildo, just for good measure (though what they do here, is hardly less explicit). The acting is solid enough to keep you interested, even as the film offers few surprises at all. It’s easy to work out where it’s going, if you know the plot of Swan Lake – and if you don’t, you will be provided with a helpful synopsis. However, once it’s established that Nina is a loony, the film does not have an enormous amount to offer, beyond some nice images. Watching someone implode is always fun, but as lurid dance epics go, I think it’s safe to say that I’ll be watching Paul Verhoeven’s entry far longer than Darren Aronofsky’s.