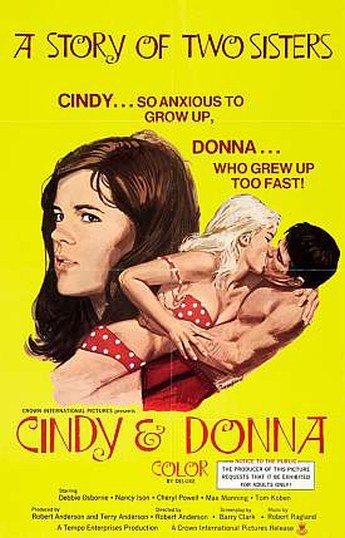 As we’ll see later, a number of the titles here skew a bit older than I’d have expected. That is not the case here, as it centers on Cindy (Osborne), a 15-year old girl and her half-sister Donna (Ison), who’s 17 – though given the amount of time they spend undressed, I really hope the actresses were older than their characters. With their mother (Allen) and father, it’s a majorly-dysfunctional family: Mom is a lush and Dad has a thing for young strippers. Presumably as a result, Donna is a wild-child, with a fondness for dope and sex [in one particularly-creepy scene, with her stepfather]. Somehow, Cindy has managed to avoid quite the same problems, and is relatively untainted, though is “curious” about sex, shall we say. This leads to a drug-fuelled make-out session with her friend Karen (Powell), and eventually, a dalliance with Donna’s boyfriend, Greg.

If you remember nothing else about this film – and I’ll confess, I had to look up a synopsis, only two days after watching it – you will remember the ending. It was the last film in the box-set I watched, and I’d got used to the sudden brick walls which passed for endings, but this one must be one of the great deus ex machina finishes of all time. The rest of it: a lot of (pseudo?) teenage nudity, but neither the characters, nor the way they interact, made any impression on me at all, and it has a curious moral hypocrisy, tut-tutting at juvenile sexuality, while spending an awful lot of time depicting it [the film was seized as obscene in Kentucky during its original 1970 release, in a case that went all the way to the Supreme Court. The conviction was quashed – while counsel for the defense admitted the film’s obscenity, the seizure had been done without a warrant]. If any of the nudity had gone anywhere, it would probably have stopped this from being a rather boring example of sexploitation.