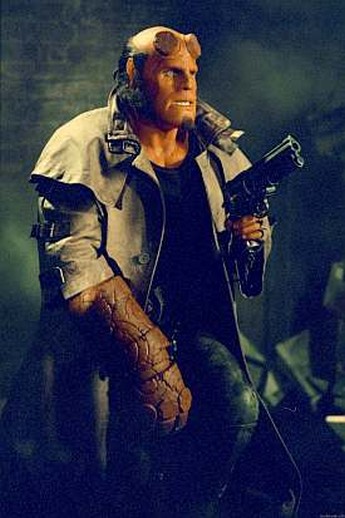 I can’t help feeling there’s something missing here. Or maybe the opposite. It’s visually sumptuous, and has a lovely performance by Perlman at its heart, as the underworld denizen who becomes the center of America’s defense against things that go bump in the night. Yet, it still feels overlong, with the middle sagging significantly in excitement. The start is great, with the infant Hellboy popping through a portal opened up by the Nazis at the end of World War II, and it’s fine as we’re then introduced to his new sidekick, John Myers (Evans), and even the nemesis Rasputin (Roden).

The problem is the the film then goes into a holding pattern. You know where it’s going to end: in a massive battle between our red-coloured hero and the Big Bad [“How big can it be?” wonders Hellboy, just before encountering something massively tenticular, which would give Cthulhu an inferiority complex]. There isn’t enough character or plot development to cover the gap in the centre.

As noted, Perlman is great, towering over everyone else in the film, in just the way a massive, bright-red horned thing should, even if he has filed the horns down to stumps to “fit in” [like that’ll work]. However, he really needs a foe of equal stature to go up against, and Rasputin isn’t it. It might also have been cool if there had been a whole team of “freaks”, but you get the sense for much of the movie that it’s the Hellboy show, and he seems to occupy much the same comic-book ground as The Thing, alternating uber-toughness with wisecracks.

Rick Baker’s make-up is still top of the class, and Del Toro brings much the same visual style here that he did to Blade II, creating a world that simultaneously runs parallel to ours, and is yet completely different from it. While by no means a complete disaster as an comic-book adaptation (coughConstantinecough, whose merits were almost entirely distinct from what made the original source work), I still can’t help feeling that something was lost in translation.