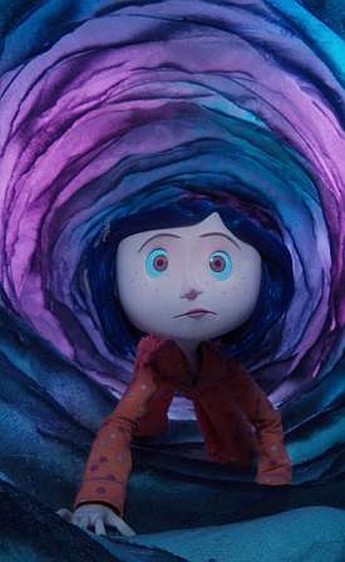 While possessing occasional moments of creepiness and atmosphere, long before the end, I was staring at the DVD counter, willing it to go faster. It’s hard to say exactly why I was so disappointed, especially when it’s set beside The Nightmare Before Christmas, which beats Coraline in just about every way. At first, I thought it might be the story, but neither is exactly burdened. I think it’s more to do with the setting. Coraline mostly takes place in Ashland, Oregon, a location which hardly lends itself to the unfettered imagination seen in Nightmare‘s Halloween Town. It’s the new home of Coraline (Fanning), whose family has moved to an old apartment there. Our heroine finds a door, behind which is a tunnel to another world, where her family, friends and neighbours are all radically-improved versions of themselves. It’s all marvellous, until Coraline discovers the price she has to pay to stay – and when she balks at that, retribution is swift.

I get the vague sense Selick was pissed that Tim Burton opted to do Alice in Wonderland without him, and so opted for this fairly Alice-like film as some kind of spoiler. The main problem is, it spends too long in the mundane world: we have to be introduced to each one of Coraline’s real-life family, friends and neighbours in details, so we can appreciate how much better the ‘other’ ones are – and this reality isn’t up to much. Things do perk up significantly when Alice Coraline goes through the rabbit-hole cupboard, and this isn’t exactly suitable for all ages – though it is a generally empowering story, in which a child comes to the rescue of the adults, so will hardly cause any lasting trauma. However, it does feel very much stretched and one wonders whether Neil Gaiman’s book contained more material that was left out, or was similarly short on content. Of course, a book relies more on the viewer’s imagination than a movie, which is supposed to use the film-maker’s. Here… not so much, and that’s a shame.