This is exactly what you would expect, if someone was to remake Terminator on a budget of… [checks IMDb] one hundred Euros. Yeah, this may be the second-cheapest feature film I’ve seen, ahead only of Who Killed Captain Alex?, which Wikipedia says cost $85. This is nowhere near so deranged or ambitious: the guiding ethos here is clearly “talk is cheap,” and when you see the action… let’s just say, you’ll understand why it’s so chatty. Yet it’s also quite charming: arguably it has more heart than Cameron’s classic. Imagine if the Terminator had fallen in love with Sarah Conner and refused to carry out its mission. That’s kinda what we have here.

“Sarah” is Leon (Spreen), a largely unsocial guy, who spends his time feeding ducks and drinking beer in the local park, or tinkering with technology. It’s the latter which is the problem. For his tech will eventually become a very, very dystopian future where everyone is compelled to live their lives out in a digitized form. From that time, Aqua (Arikan) is sent back to kill Leon and prevent him from completing his work. However, the more she finds out about him, the more inclined she is to believe she can talk him out of the project. Her boss in the future (Steiber) is less convinced, and sends the XB10-3 (Obe) back to kill Leon instead. Which is all rather awkward, since the XB10-3 also happens to be Aqua’s ex-boyfriend, prompting her to tell him, “I can’t be with a depressed robot anymore.” 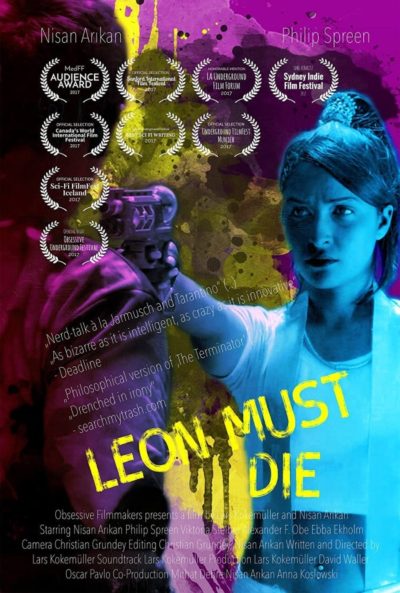 As with most of Henriks’s other films, it’s the humanity at its heart that makes it work. There’s more than a little Hans Wagner about Leon – pointedly, at one point he’s watching that movie on television – with them both being introverts who unexpectedly find themselves at the centre of world-shattering events. He’s remarkably unfazed by the prospect of his death at the hands of Aqua, albeit with a very good reason. That’s revealed midway through, opening a whole barrel of philosophical and existential questions about life, death and the implications of alternatives. The film never comes up with answers: that likely isn’t the point though. Even if the discussions sometimes sound like something you’d hear down the Students Union on cheap beer night, there’s an honesty to them, reflecting the struggle we all have with these weighty topics.

Technically, it’s largely kept simple. Though there is one glorious moment where Leon and Aqua go to get some fried noodles. Rather than cutting to the pair eating the noodles, or following them into the shop, the camera waits outside, just absorbing Hamburg street life for a couple of minutes. This, or Leon eating his breakfast in what feels like real time, are good indications of the (lack of) pace you should expect here. Things happen when they need to, and much like life, you’re not going to get to your final destination any quicker by hurrying.