I break my self-imposed rule of listing only four actors, because this film has five main roles, and it’s hard to say which one of them shouldn’t be included. They all feel like important moving parts. It begins with a dinner for work colleagues Mark (Lutz) and Sean (Williams), along with their respective other halves, wife Sylvia (Weixler) and new girlfriend, Christina (Guerrero). It’s quickly established something is up, with large amounts of cash being carried around by Mark and Sean. Their party is interrupted by new neighbour John (Bamber), whose initially innocent appearance turns serious, after revealing he knows the men ripped off their employer, selling secrets to a rival for $5 million. John is there to steal the money, and a severed digit shows he won’t take no for an answer. 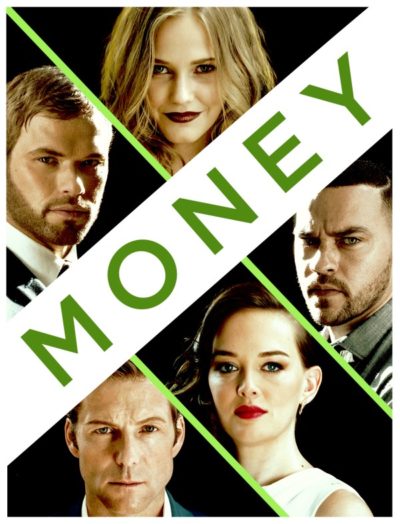 You can probably figure out the broad brush-strokes here, with betrayals, temporary alliances and revelations as the night progresses. To be honest, the scripting isn’t the best part of this, with a few too many loose ends and casual dismissals. One major character’s fate in particular, is of the blink-and-you’ll-miss-it variety. There’s also a painful breach of one cinematic rule: the opening scene has Mark’s gardener wielding a spear gun, and we kept waiting for this to make a return appearance later on. I’ll save you the bother, because it doesn’t, much to the disappointment of Anton Chekhov. The ending could perhaps have used one more scene too.

However, we did like the performances, particularly that of Bamber. The extended scene with all five of them sitting around the table is an excellent example of how tension can be created without the need for much to happen. John’s transition from urbane and pleasant guest to malevolent hostage-taker is startling and effective, and the reactions of everyone else, as it’s clear he knows far more than is comfortable for them, help sell the marginally questionable concept (it’s never clear how John knows as much as he does about all of his victims). Having been used to seeing Bamber in more heroic roles, seeing him get his teeth into villainy was impressive.

Once things move into a more conventional hostage situation, it’s not quite as effective. Though outside of a couple of scenes, still feels like it could be an adaptation of a stage play, an interesting approach for a movie. I found myself always trying to figure out which way things would turn next, and it’s always a good sign when a film can keep me engaged like that. Admittedly, most of the characters are varying sized bags of douche, so you never feel much sympathy for their predicament. Yet this feels largely deliberate, and I suspect it was intended as a criticism of conspicuous consumption, and the willingness of the 1% to screw each other over – either when necessary or by questionable moral superiority. The gardener may be about the only truly likeable character in this.