One of the streams of Western monster movies is the N-headed Shark Attack franchise, where N ranges from 2- up to 6-Headed Shark Attack. There, for the moment, the matter rests, but China has gone further. They have taken the Hydra from Greek mythology, and transplanted it to the curiously-named (at least, in English) Mount Mingling. The makers are not the first to do so: the low-budget 2009 movie Hydra also went there (here’s the trailer). To be honest, the special effects in this do not appear to have improved much over the intervening decade. The (somewhat) good news is that this is one case where the story-line is actually interesting enough to merit some attention, though it doesn’t manage to make it all the way to the end. 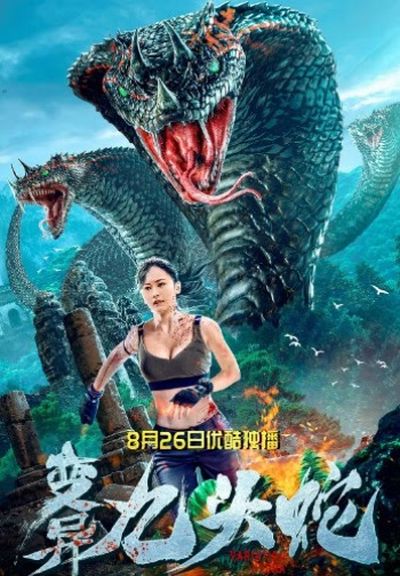 After reports of a gigantic multi-headed snake, an expedition sets out to investigate. It’s led by Prof. Chen (Wang), along with his top researcher Bai Jing-Tian (Li Z-Y), and a security detail headed by ex-soldier Li Zheng (Li K). They pick up a “stowaway” scientist on the way, Cheng Yu-Xuan  (Zhang), and it’s not long before the snake is thinning the herd, beginning with the party’s bus driver. But Bai begins to grow suspicious about the Professor, who is packing growth hormone in his gear. Chen may have more of a hand in the creation of the beast than he is willing to admit, and for a while the film takes on a distinctly Alien-like vibe, albeit not offering a discussion of the bonus situation.

This is when things are its most interesting, and there’s effort put into concealing people’s motives, with a couple of genuine surprises. It definitely made me look more kindly on the hydra effects. While it’s a lot easier to get so many heads onto a snake than a shark – you just basically split the neck as needed – the results here are never more than unconvincing, and sometimes fall to woefully inadequate. In the early and middle stages, it’s mostly slithering about in the undergrowth, pulling people out of shot, and that’s bearable. However, the failings in this department are increasingly apparent as we build towards the climax, and the hydra enters the harsh light of day.

Matters are not helped by a pair of entirely unnecessary post-credit scenes, which suck the life out of the film. They should have ended with the traditional final shot – nay, one almost compulsory in the “giant snake” genre – of a nest of eggs, and drawn a line under it. Up until then, this had just about managed to skate by on the strength of the writing; not something I’ve been able to say about many of these films. Unfortunately, it is unable to keep the momentum going, the writers’ tank running out of petrol with about 20 minutes still to go. By the time the credits roll, it’s up on bricks at the side of the road.