This is more or less a frosty Chinese version of King Kong, and is notably different from most of the other monster movies, in that the title creature is mostly a man in a suit, rather than being CGI. It’s an endearing throwback in this regard, and does allow for a consistency in results, rather than relying on a technique whose quality can vary from scene to scene. However  it comes with limitations of its own, and the creature looks more cute than threatening. Despite being several hundred feet tall, it looks mostly like an animated plush of the Yeti from Monsters, Inc. instead of the ferocious creature depicted on the poster.

Events begin with the Arctic expedition under Shen Yiqin (Zhang) encountering the beast, after which contact is lost. A rescue mission is sent to see what happened, under the leadership of Ren Yifei (Wu), who also happens to be Shen’s ex. Even getting to the region is fraught with danger, something apparent as soon as the expedition finds a series of skeletons, all of which have had holes drilled in their skulls. Getting past that, the next threat are the ice sharks mentioned in the alternate title. However, the assault by one is interrupted when it’s grabbed by the tail, and swung against a rock by Mr. Yeti. It turns out to be worshipped by a local tribe, yet within the party lurks Shen’s uncle Heng (Jiang), who is after the beast’s DNA for commercial purposes. 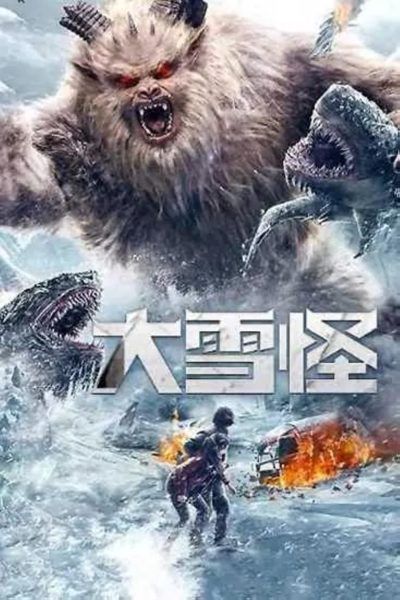 I must confess, I was hoping this might lead to it being captured, brought back to Shanghai and going on a rampage, in line with the Kong (cough!) “homage”. No such luck, though we do get a trio of fighter planes showing up, to buzz the creature’s tower and get swatted into giant fireballs. The other element missing is any relationship between the monster and Shen. Indeed, it doesn’t seem to possess any personality to speak of – beyond being adorable, and that’s probably just genetic. It shows up strictly when necessary to the plot, and so there is no real emotional component. It’s this which leaves it short of any of the Kong movies, be that the Fay Wray, Jessica Lange or Naomi Watts versions.

The nearest we get to romance is instead the unrequited love the overweight comic relief member of the party, Wen Cai (Xin), has for the tribal princess. It’s doomed from the start. Due to the lack of depth, you can only really watch this as a straightforward monster movie. It’s one where I sense the target audience may well be younger than the typical entries in this series, with the inevitable squishing of the bad guys low-key in nature. That said, the pacing is decent, and fewer of the characters than usual are actively annoying. Though I’d definitely suggest avoiding the dubbed version on Tubi, in favour of the subbed one on Youku’s YouTube channel.