This starts off quite impressively. In 1980, a meteor hits the ocean, triggering a volcanic eruption which creates a new island. For unclear reasons, this island is inhabited by both flora and fauna from a certain geological epoch [mockbuster film-makers everywhere, give thanks that the word “Jurassic” cannot be copyrighted]. The scientific team under Dr. Zhao find this out when their camp is attacked by an irate Tyrannosaurus, whose annoyance may be linked to the doctor incubating an egg. Contact is lost, as is the island, and we then fast forward to his daughter (Ma), who is now also a scientist, though I’m a bit confused by the time-line. It looks like the present day, yet Dr. Zhao II is clearly not in her forties as you’d expect. Oh, well: whatever. 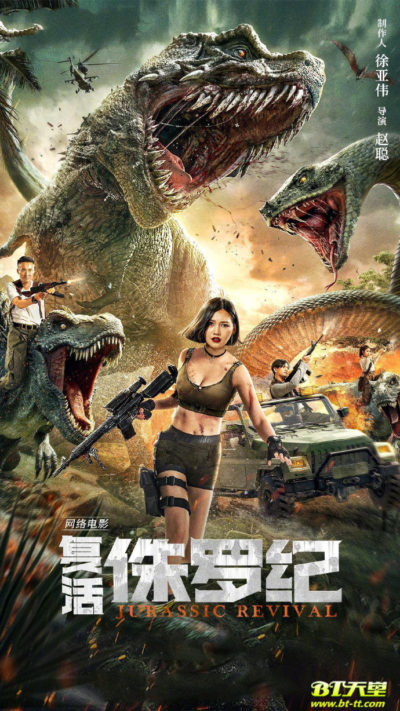 She is approached by Evil Industrialist Du Zhe (Yang), and clearly not having seen any of these movies, Zhao accepts his offer to join an expedition to the lost island. She hopes to find out what happened to her father. Naturally, he and his minions have an ulterior motive, seeking to find the meteorite and exploit it. They won’t let trivial matters, like the rapid deaths of multiple party members, in unpleasant ways, interfere with that. By “unpleasant”, I mean infected by spiderlike parasites, chomped by giant snakes and torn limb from limb by dinosaurs. This is rather bloody, by the standards of these things, such as when the Tyrannosaurus and giant snake fight (as seen on the alternate poster, albeit in “artist’s impression” form), ending in the latter being bitten clean in two.

The opening scene in the eighties is particularly well done. The attacking dinosaur has an apparent physicality well beyond most of these films, knocking aside human cast members in a convincing way. However, the rest of the set pieces struggle to reach the same standard, not least due to poor scripting. There are times where people just stand about, apparently admiring the monsters attacking them. Then we have the “Dinosaur Whisperer” who shows up, riding on the back of a carnosaur. As depicted, it’s difficult to take seriously, and you find yourself waiting for the unusual talent to show relevance later on. Let me save you the bother: it doesn’t.

Turns out, if Du gets to harvest the meteorite, this will kill all animal life on the island (for further poorly explained reasons, apparently involving magnetism). That sets up a battle between him and his loyal minions, and Dr. Zhao II plus those on her side, including Sang Ji (Feng), who defected from Du’s team. It takes place in a weird location, where jets of flame shoot out of the earth, and velociraptors are running around. Despite this, and the presence of a demolitions expert with an exploding ghetto-blaster, it still manages to be not especially interesting as a climax. The same can be said for the movie overall, and it never recaptures the energetic competence of its opening.