It’s somewhat ironic that John Carpenter was originally supposed to direct this. However, after The Thing tanked at the box-office, he was let go from the project, and replaced by the more commercially “safe” Lester. The irony being that The Thing is now regarded (rightfully) as one of the greatest scifi/horror films of all time, while this is… not. It’s very much a mid-tier Stephen King adaptation, far less well remembered than the similarly themed The Dead Zone, from around the same time. I can understand why: it’s lumbering when it needs to be taut, needlessly coming in a little shy of two hours, and only comes to life at the end, when a pissed-off Drew gets enough XP to learn her Level 3 Fireball spell. 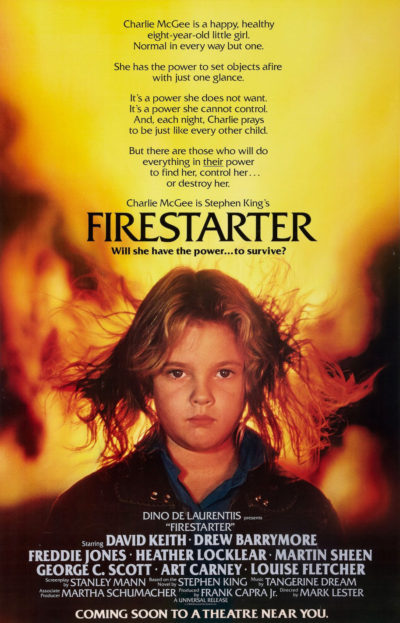 She plays Charlie McGee, daughter of Andrew (Keith) and Vicky (Heather Locklear), who met during a fringe scientific experiment, carried out by a dodgy arm of the government. Dosed with a substance called Lot 6, she can read minds, and he can compel people to act in accordance with his will. Charlie, meanwhile… Oh, see the title. Or the poster. Figure it out for yourself. Though the stiff breeze which springs up out of nowhere, each time she furrows her little brow and gets toasty, is a nice touch. Naturally, the government under Captain Hollister (Sheen) are very keen to get their hands on her, with psycho Indian hitman John Rainbird (Scott) eventually sent out to bring in Charlie.

There’s quite a lot here which has not stood the test of time, and/or wasn’t very good to begin with. Top of the list is likely Keith’s performance, which feels like a poorly conceived effort to channel Patrick Swayze. Scott is creepy, for all the wrong reasons. Rainbird’s relationship with Charlie feels inappropriate from a 2020’s angle, and few people are likely less appropriate to play a native American than Gen. Patton. The film’s main strength is Barrymore, who alternates between adorability and frankly being damn scary. Every other minute, you want to hug her… while wrapped safely in a fireproof suit. At the age of eight, I guess she was still a couple of years from going into rehab.

The structure doesn’t help, beginning when Charlie and her father are already on the run. This then requires a series of clunky flashbacks to get us caught up, and there is likely too much sitting around the lab, getting father and daughter to demonstrate their talents. Charlie probably isn’t the only one to issue a derisive snort when she is presented with a pile of wood chips. When things do eventually get going though, this is deliciously well-done (in the steak sense, at least), a throwback to the days in Hollywood when wanting to blow stuff up, required actually blowing stuff up. I would nod in acceptance if you told me the finale was responsible for starting off global warming. It just doesn’t quite make up for the 105 minutes which preceded it.