This is likely the only year where the same director was responsible for the #1 and #2 horror films of the year. But there really couldn’t be more of a gulf between this and Videodrome, which came out eight months earlier. The latter is the definitive David Cronenberg movie: warped beyond belief, yet amazingly cerebral, repaying repeat viewing, and well ahead of its time. None of these things could honestly be said about The Dead Zone. Oh, it’s workmanlike and solid enough, but safe in the extreme, as you would expect from a Stephen King novel – his name is basically a byword for comfortable, pop-horror. At this point in the eighties, it seemed his work became movies every other weekend. 1983 alone saw three feature adaptations, with Cujo and Christine as well.

Cronenberg seems a bit of an odd choice, but after Videodrome, he wanted a break, calling it “a very heavy experience… I needed to do something based on somebody else’s work, as a relief.” He wasn’t the first director attached to the project. The rights to the book had been purchased soon after its publication in 1979, with Stanley Donen, John Badham, and Michael Cimino previously having been linked to it. The script took quite some hammering out too, chopping down King’s 428-page book to feature length. Various people had a crack at that , including King himself and Andrzej Żuławski.  While Jeffrey Boam is the only credited writer of the screenplay, Cronenberg worked heavily at beating it into a shape with which he could work. 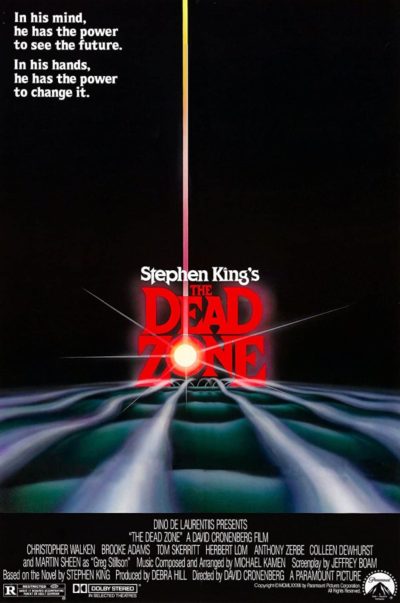 It’s the story of generically-named Johnny Smith (Walken), who is critically injured in a car accident, and spends the next five years in a coma. On waking, he finds he has psychic abilities, which allow him on occasion i.e. when necessary to the plot, to see the past or future of those he comes into contact with. It’s a bit of a mixed blessing: the talent allows him to end a local serial killer’s reign of terror, but the media attention he receives is certainly unwelcome. Things come to a head when he meets up and coming politician Greg Stillson (Sheen), and sees a future in which Stillson starts World War III. Having realized the future is not fixed, and can be changed, Smith decides Stillson must die, to prevent the apocalypse.

The various elements never quite gel. In addition to the above, there’s a romance with his pre-accident girlfriend, Sarah (Adams), who has moved on, got married and had a kid while John was in his extended nap. She comes back, and they consummate their relationship before she says they can’t go on. Look: make your mind up, will ya? It never goes anywhere much, and seems to exist only to provide the toddler necessary to the film’s climax. In addition, the serial killer thread is a film in itself, and the “big bad” of Stillson doesn’t turn up until the second half, so including the romance, this feels like three different movies crammed in to one. It’s easy to understand why the book was subsequently adapted into a TV series, which ran for six seasons.

Fortunately, Walken is the glue that holds the movie together, delivering an excellent performance that’s sympathetic and vulnerable. Smith is dropped into an untenable situation, not of his own making, and has to try and figure out how to navigate the moral maze which results: is it acceptable to take a life, in the belief that by doing so, you save many? The actor takes you along on that journey, in a more empathic way than, say, Michael Ironside in Cronenberg’s Scanners, which also concerned a man gifted with extraordinary psychic powers – albeit rather different ones, obviously. The softer edge to the approach here likely works better given the material, with Smith a more heroic figure than Darryl Revok.

The rest of the cast are kinda functional, though Sheen is clearly enjoying himself and pushing the pedal to the metal in his role as a charismatic yet nutty as a fruitcake politician. The sense of concern generated was likely enhanced by watching this the same week our current President was talking up the prospect of Armageddon: “I want to remind you that our country also has various means of destruction” is, really, not so very different from “Hallelujah, the missiles are flying!” Herbert Lom plays Dr. Sam Weizak, the physician who is among the first to experience John’s talents, and is a rare instance in a Cronenberg movie of a scientist who is neither meddling with things he shouldn’t, nor straight-up villainous. 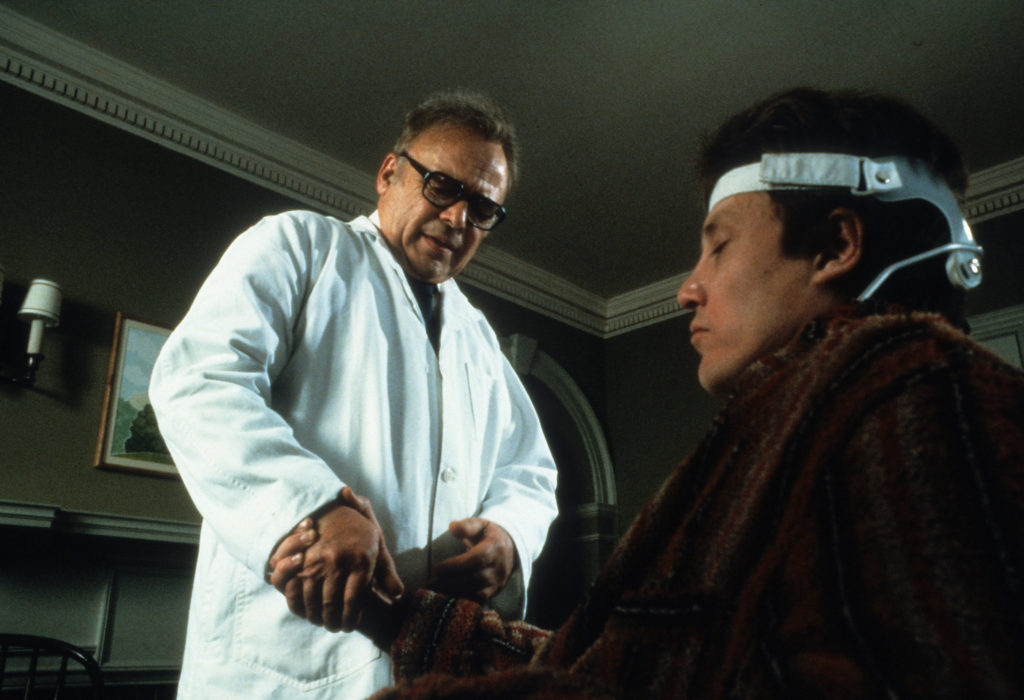 There are occasional elements that make this a pure period piece. This dates from a time where you could wander into the intensive care unit of a hospital without any form of check. It was an era where mounting an assassination attempt on a politician simply involved getting there a bit early, then taking a nap in the balcony with your large gun, and waiting for the target to show up. You also got to wander unaccompanied around the house of the chief suspect in multiple murders. Ah, those were the days! Now, your psychic would have to work considerably harder to achieve his goals.

It ends up being your typical Stephen King adaptation: entertaining enough, yet like most, I can’t say it rocked my world. I did like the matter-of-fact way in which Cronenberg depicted the material, when others might have opted for a more supernatural route. Oddly, Cronenberg opted to excise the part of the novel in which Johnny had a brain tumour, perhaps a factor in his talent. It would have seemed exactly the kind of “your body is rebelling against itself” theme beloved by the director. Instead, it’s likely his most accessible work. But given what I love is his willingness to push the envelope, I can’t say that statement is particularly an endorsement.

This review is part of our October 2022 feature, 31 Days of Classic Horror.

[Original review] This was originally supposed to have been shot by Cronenberg before Videodrome, but due to a mix-up, Lorimar (who had the rights at the time)  offered it to another director as well as Cronenberg. Though he lost out, that project was shelved – the option was sold to De Laurentis and happily, they took Cronenberg on.

It’s based on a book by Stephen King, although the screenplay combines the three parallel views of the story in one. Walken plays Johnny Smith, who wakes from a five-year coma to discover he has the power to see incidents in peoples’ pasts or future by touching them. Although he has misgivings, he lets the local sheriff (Skerritt) talk him into using this ability to help track down a murderer. He succeeds, but the end result is further deaths (the gazebo where Smith has the vision of the murder became something of a cause celebre in the town. It was built for the film and a debate followed after shooting between those who wished to keep this architecturally correct prop and those who wanted to tear it down for the lumber. The former group won!). 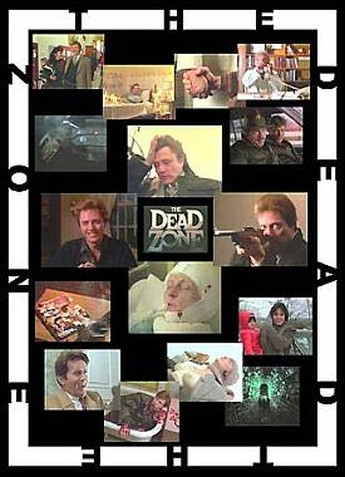 The crunch comes when Smith shakes the hand of presidential candidate Greg Stillson (Sheen), and sees a vision of him beginning World War III. Should he try to stop the man? After much thought, he decides to assassinate Stillson, despite the fact that his ex-girlfriend is helping in the campaign (she does play a bigger role in the film than this!). The attempt fails when Stillson snatches the girlfriend’s baby and uses it as a shield, and Smith is shot, but as he lies there dying, he has a final vision, of Stillson’s ruin and eventual suicide after pictures of the event are seen around the world.

In many ways, this isn’t a standard Cronenberg film. Unlike his others, he didn’t write the screenplay, although he did have a good amount of creative input. Despite this, and a lack of diseased sexuality, it still has some of the elements discussed above i.e. Smith is able to live with his ‘gift’, more or less happily, until people such as the sheriff come along to ask for his help. Christopher Walken is pretty good as Smith – this film dates back to when his career was still above water – and the rest of the cast provide solid, if not outstanding, performances. The vision sequences are very effective; the start of World War III, with Stillson launching the ICBMs, is chilling stuff. “Hallelujah, the missiles are flying”, he says with a smile.

King’s movies are admittedly tough to film, the best results being where much of the wordy crap, for want of a better phrase, and dead characters are cut. Thus The Shining becomes an almost totally different story, and the same can be said of The Dead Zone, to quote scriptwriter Boam: “The book is not structured for film; it rambles”. Hence, the removal of various sundry subplots and characters. 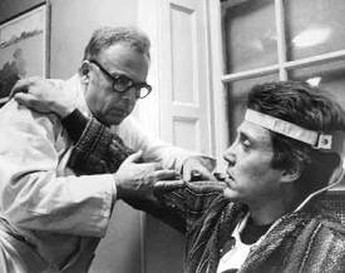 The effects in The Dead Zone are rather subdued when compared to almost all his other films, or at least it’s restricted to relatively mundane things such as fires and blood squibs. One scene that did initially fall foul of the British video censor came when the murderer sought by Smith commits suicide by falling face-first onto an open pair of scissors – only the after effects are shown, in a brief flash, but even that had to be excised. Note for trivia buffs : the effects crew on the movie included the daughter of Martin Scorsese, Cathy.

Probably Cronenberg’s most mainstream and accessible film to date, it gives us perhaps the best example of the mutant as hero, another popular theme of his. If the results of the #1 horror film director making a film based on the #1 horror novel author aren’t everything we hoped, it could certainly have been a whole lot worse.