Toss-up between this and American Werewolf for the “Wait, what – I never reviewed it?” award in this series. Truth is, I haven’t even seen it for over thirty years. The last time was probably in 1989, when I was in the process of moving into London, and was temporarily staying with a workmate in Wimbledon. The local Odeon had an all-night marathon of the first four installments for a fiver. At the time, I was pleasantly surprised by them, with the exception of #3. But of the iconic horror franchises, I think Nightmare is likely my least favourite overall. It always seemed the most obviously teen-oriented, and even back then, I despised the comedian Freddy Krueger quickly became – an influence still felt today.

Rewinding all the way back to the original though, what particularly surprised me is how little there is of Krueger in it. Up until the end, he’s largely an unseen presence, his name not even spoken for the first half, because what happened is the town’s dirty little vigilante secret. It’s much more the story of Nancy Thompson (Langenkamp), who discovers she and her classmates have been having nightmares about the same person – a madman with a bladed glove, wearing a striped jersey, who terrorizes them in their dreams. Except it appears these are having real-life consequences: one girl finds her  nightdress cut to ribbons, and when Nancy burns herself on a pipe in her dream, her arm is damaged when she wakes. 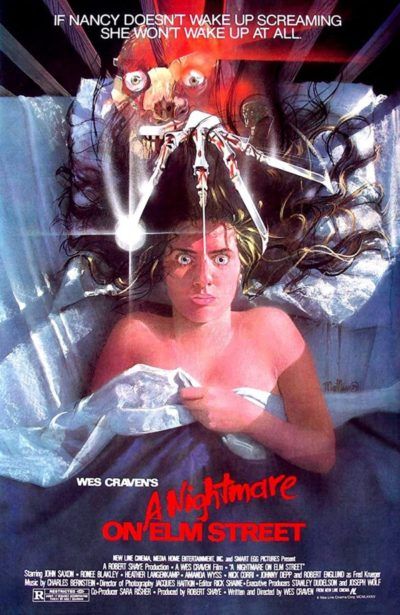 One girl is eventually slashed to death and, despite protestations that it was done by an unseen assailant, her boyfriend is arrested by the police, including Nancy’s father, Lt. Thompson (Saxon). The alleged perpetrator is then hung in his cell. With Nancy becoming too scared to sleep, she’s sent to a clinic for observation, but finally manages to get proof of the blurring between the dream and real world, pulling the attacker’s fedora out into reality. It bears the name “Fred Krueger” inside, and her mother is forced to admit the truth. Krueger was a child killer who got off on a technicality, and was then burned to death by a mob of angry townsfolk. He has now returned to haunt dreams: why he is going after the kids, rather than those actually responsible, is never quite explained.

It’s all quite startling when you consider how far and quickly Freddy Krueger fell, in terms being a genuinely scary character. By part four, he was chasing down rappers The Fat Boys for their song, Are You Ready for Freddy. There’s good reason Craven eventually tried to correct course in 1994 with the rather clunkily-titled Wes Craven’s New Nightmare, though only succeeded in vanishing up his own meta-movie. While that was still a decade in the future when this came out, it is difficult from a contemporary point of view to separate what was to come. Indeed, if I was a Freddy fan – and at one point, there was a club for such people – I’d have been demanding my money back. No wise-cracking one-liners? What is this shit?

It does, however, work well as an evocation of the uncertainties in the world of dreams, where we have no conscious control over what might happen to us. We’ve all had experiences there, which we were glad came to a definitive end when we opened our eyes. I suspect many of us, even before Elm Street arrived, at least briefly considered the implications of what might happen were that not the case. The inspiration for the film came, according to Craven. from “articles about men from South East Asia, who were from immigrant families and had died in the middle of nightmares.” Hang on… If they died while asleep, how did anyone know they were having a nightmare? Oh, well. Why let facts get in the way of a good origin story?

A number of studios passed on the project, before -fledgling company New Line agreed to make it, under producer Bob Shaye [his sister, Lin, plays an English teacher in the movie]. Funding was not easy: Shaye later said, “All the investors, at one time or another, backed out during pre-production. Half the funding came from a Yugoslavian guy who had a girlfriend he wanted in movies.” Nor was casting. Some say an earlier choice to play Freddy was David Warner, until scheduling conflicts arose. An oft-circulated photo and effects designer David Miller claim make-up tests were shot with him, but Warner himself has said he has no such recollection. Amusingly, Englund got the part after channeling his inner psycho: “I posed a bit, like Klaus Kinski, and that was the audition.” 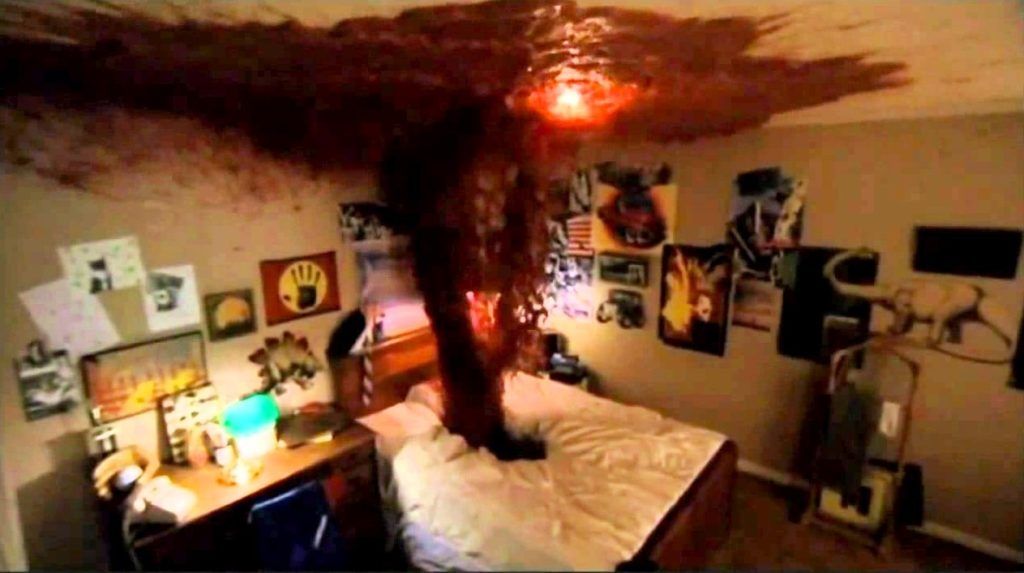 Impressively, it got to use “Introducing…” for Depp, although easily the most memorable thing about the performance is his death. It is likely the best in the film, involving a giant geyser of blood fountaining up out of his bed (above). Again, there’s no Krueger in sight. Craven sticking to the belief that less is more. It’s effective, though the payoff when we do eventually meet Freddy isn’t bad either. It remains too teen-oriented for my personal tastes, not least because Nancy and her pals don’t do much except rehash the character tropes used in Halloween, with the heroine little more than Laurie Strode with longer hair, all responsible and stuff. Rather better with the improvised booby-traps though: the speed with which she whips up a VietCong level kill-box in her bedroom is truly impressive.

I’m not sure it’s going to coax me into watching any sequels, not least because the ending here is dreadful. The kids drive off in a convertible possessed by the spirit of Freddie, while Mom gets pulled back into the house, in an effect which can only be called spectacularly terrible. The film does work as a stand-alone: I’m some way short of convinced about the need for one sequel, let alone the six and a half (Freddy vs. Jason) plus a reboot which were to come.