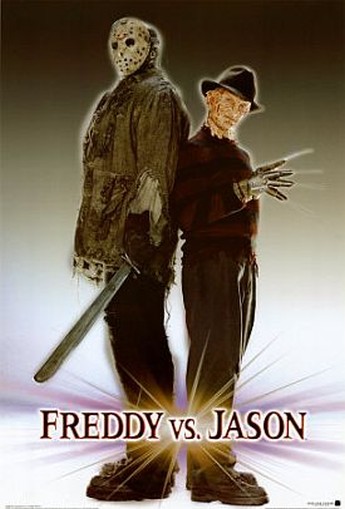 In my original review, I called this “the Wrestlemania of slasher movies: all we need is Michael Myers for a triple-threat, falls count anywhere, no disqualifications bout.” It still feels like that: the biggest surprise this provided on the re-view was realizing, not only that Ritter is now starring in The Event, but it also has Katherine Isabelle, pre-Ginger Snaps [though her nudity here is body-doubled]. Fans had been waiting for this for what seemed like forever, and it was undeniably a hit, with an opening weekend gross beating the last three Nightmares combined, or Fridays 6-10. Freddy resurrects the hockey-masked one to strike terror into the hearts of the Elm Street kids, who have forgotten all about him. And what boogey-man is any good without fear? Unfortunately, turning Jason off is a damn sight harder, and Freddy gets a bit miffed when Mr. Vorhees continues to take out those whom Mr. Krueger regards as “his” territory. This leads to what we’ve been waiting for: two titans of terror going toe-to-toe for the final twenty minutes.

Up until that point, it feels almost like you’re channel-hopping between entries in each series, as each icon operates in his usual fashion i.e. Krueger with a witty quip and in dreamland, though curiously, he only dispatches one actual victim in the entire film. That probably explains why he’s a tad peeved by his rival stacking up the body-count – a bit like Gimli and Legolas in Lord of the Rings. For Vorhees prefers to let his actions speak louder, most notably at a rave, where he dispatches half-a-dozen teens in quick succession. That allows Yu to show off his nice eye for the visual side, with a flaming Jason stalking his prey through a corn-field [sidenote: why is it always a corn-field in horror movies? Does no-one farm anything else?] However, this feels like pure padding, an overlong series of appetizers before the main course, with only Keena’s significant mammaries to distract us. And by us, I must point out it was Chris who mentioned these. Repeatedly. The ending is every bit as inconclusive as you’d expect, though the only action either franchise has seen since was their respective reboots.

Body count: 19 (by Jason only). Best kill: there’s not much imagination on view here, most of them being straightforward hacking and stabbing with the machete. The first one in “reality”, however, adds the victim getting bent in two the wrong way, along with his bed.