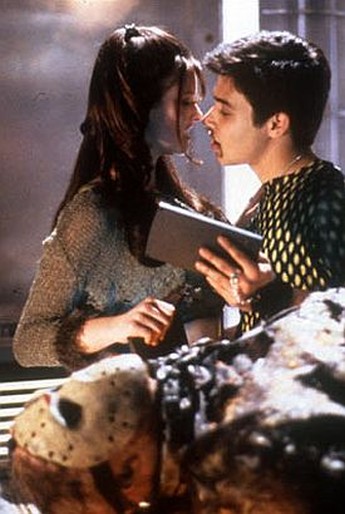 So, let’s relocate Jason to space, shall we? After all, that worked so well for the Leprechaun series, didn’t it? Actually, this is a lot of fun, and the more so now I have seen the previous nine entries, and can appreciate the little nods in the script to those movies. This is mostly set 450 years in the future, after Jason gets cryogenically-frozen, in the hopes of keeping him out of trouble, after authorities (including a quick appearance by David Cronenberg) have realized he can’t be executed. Earth is now a wasteland, but popsicles Jason and his “keeper”, Rowan La Fontaine (Doig) are rescued by a students’ field trip under Professor Lowe (Potts). Rowan is revived, but before she can convince everyone else of the danger, Jason is up too, and is back to his usual tricks of mass slaughter, with both the students and the platoon of soldiers also on the ship, as the victims. Can La Fontaine and the steadily-declining number of survivors, put a stop to Jason once again?

This was the first Friday the 13th film I ever saw, and it remains my favourite,combining the spectacular deaths expected with a wry, if occasionally unsubtle, sense of humour: we came up with the “He’s screwed” line in the cinema, a good 30 seconds before the film did. The makers clearly acknowledged that, by this point, Jason is completely ineffective as a tool for generating any degree of actual fear in the audience. So they headed in a more fun direction, such as android KM-14 (Ryder) tooling up to go all Matrix on Jason, and Lowe’s impeccably-stupid dialogue, including lines like “Everything is under control,” “You’ll be safe now,” and the immortal classic, “Guys, it’s okay! He just wanted his machete back!” No prizes for guessing how that works out. While possessing more than a little in common with Aliens, sharing a cryogenically-frozen heroine and gung-ho marine cannon-fodder, the movie clearly doesn’t take itself at all seriously, and is much the better for it.

Body count: 18 (by Jason only). Best kill: the first one in space, where the student has her face dipped in liquid nitrogen and then shattered against a counter.