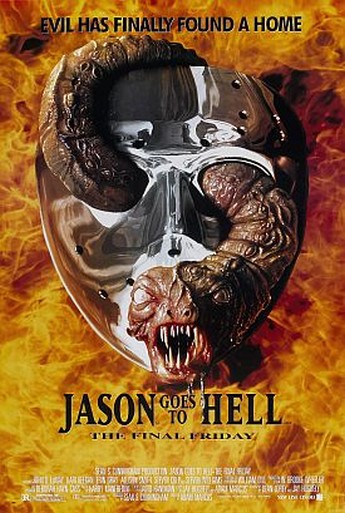 So, turns out Jason is now a big, black dude who likes to give shaves. Or a really pissed-off TV executive. Who knew? While I admire and agree with the decision by the makers to pretend, basically, that Part VIII never happened at all, the complete revisionism shown here is fairly questionable. Turns out, while you can destroy Jason’s physical form, that only causes him to possess other people’s bodies, using a parasitic entity, more than a bit like The Hidden. And in order to be reborn, he needs to use a blood relative – yet the same is also the only person who can destroy him permanently. Shame no-one bothered to find this out in the previous eight features. Oh, and did we similarly forget to mention that Jason Vorhees had a sister? Like I said, this isn’t so much a sequel as a near-desperate attempt to reboot the franchise, in the wake of steadily-declining returns, and at a new studio (New Line instead of Paramount). Some of this works, such as the initial FBI sting operation which reduces Jason to a pile of body parts. The rest, not so much, nice though it is to see cameo appearances by props from The Evil Dead and Nightmare on Elm Street.

There isn’t much consistency of tone here: parts feel like something from a TV movie of the week, while others seem to be bordering on Natural Born Killers media satire, or aping John Woo-style gunplay. There’s even some self-referential moments, as when Steven (LeMay) says to some hitch-hikers he picks up, “Planning on smoking a little dope, having a little premarital sex, and getting slaughtered?” It’s not really a spoiler to reveal he’s generally accurate in this prediction. The script yanks so many rabbits out of its hat, as Jason hunts his niece Jessica (Keegan), the result feels like a huge cheat, though I enjoyed the intensity Steven Williams brought to his part as bounty hunter Creighton Duke, and appreciated his best efforts to sell the wholesale rewriting of the Vorhees legend demanded of the character. While there are some interesting concepts here, the makers would likely have been better using the story on a new characters, as the attempt to shoehorn Jason into them here is a dismal failure.

Body count: 16 (discounting possession victims and off-screen deaths). Best kill: the death of the second hitch-hiker is a particularly-impressive advertisement promoting the virtues of safe sex, as she is cleaved from neck to navel. That’s what I call coitus interruptus.