After being replaced by slashers at the start of the decade, the mid-eighties saw a bit of a revival in contemporary vampire films coming out of Hollywood. I guess it perhaps began with 1983’s The Hunger, and ran on through the likes of Vamp (1986) to The Lost Boys and Near Dark (both 1987). The wave reached its peak here, Fright Night becoming the year’s biggest horror hit at the North American box-office. It subsequently spawned a sequel, and over 25 years later, the remake mentioned in my original review, below. It is still viewed with a great deal of affection ‐ perhaps the most of the vampire films mentioned – and on this viewing, I can see why. It manages to strike a good balance between acknowledging the silliness inherent in the concept, while not actively mocking the situation. Holland also wrote the script, and I think this is a rare case where that helped. Any other director might not have treated it with the loving care which is apparent.

He wrote the role of washed-up horror actor turned TV host Peter Vincent for Vincent Price, but it was probably a little too close to the bone there. McDowall is a perfectly fine replacement, bringing warmth to the role, arguably Peter possessing the best arc. Holland called him the movie’s heart and you can see why. Though teenager Charley Brewster may move the plot on, it’s Peter who has to dig deep and find the courage, for a fight which really is nothing to do with him. The main aspect not to have dated well is vampire Jerry Dandrige’s pursuit of Charlie’s high-school girlfriend, Amy. Between that and Jerry’s minion, there’s a weird pedo/homo vibe, only slightly defused by Bearse being in her late twenties when she made this. 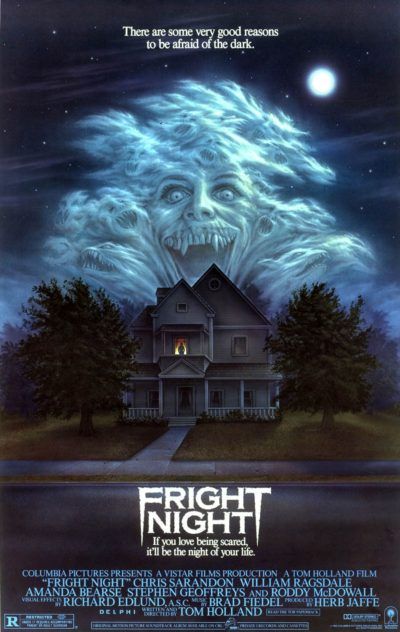 I thought the effects were surprisingly good: not quite American Werewolf level, yet still absolutely enough for the purpose. I was especially impressed with the de-transformation of Charlie’s pal, Evil Ed (really, if you have any expectations for a character with that name other than becoming a vampire’s henchman, I don’t know what to tell you). He has shifted into a wolf form to fight Peter, only to suffer an unfortunate encounter with the pointy end of a broken table, then a chandelier. As Ed dies, he shifts back into human form, a painful final transition that’s messy, drawn-out and well-executed.

There are some gaps in the plot, such as the apparent lack of police interest after Jerry kills two bouncers at a nightclub, in front of hundreds of witnesses. Whether you are a vampire or not, murder is still murder. I also get Amy resembling Jerry’s long-lost love – y’know, back when he was straight. However, quite why her hair randomly changes length and style is unclear. Hey, it was the eighties, when coiffeurs had a life of their own, powered by Aqua Net and the wholesale destruction of the ozone layer. [I’m amazed there was never a horror movie out of the decade about possessed haircare products] On the other hand, delightful to see, mixed in with faux-movies from Peter Vincent’s career, footage from the Hammer Dracula cycle. There’s good reason for this:

It’s the horror movies you grew up with, maybe from age seven, eight, nine years old, through to your teen years, whatever blew your mind back then. And those are your favorite horror movies for life. For me, it was Christopher Lee Dracula movies. I was writing a love letter to horror fans everywhere, and I was writing it about my youth, and the movies that I grew up on.
— Tom Holland

Homages can be seen, not just in the name of Peter Vincent, also the school attended by Charlie, Amy and Ed: the Christopher L. Cushing High School. Yet the film is smart enough not to make a fuss about these. They’re there if you notice them; otherwise, the rest of the movie has plenty to offer, so no big. It’s a good example of how to revamp (pun very much intended) an old genre, and bring it into the modern day, while doing so with respect. 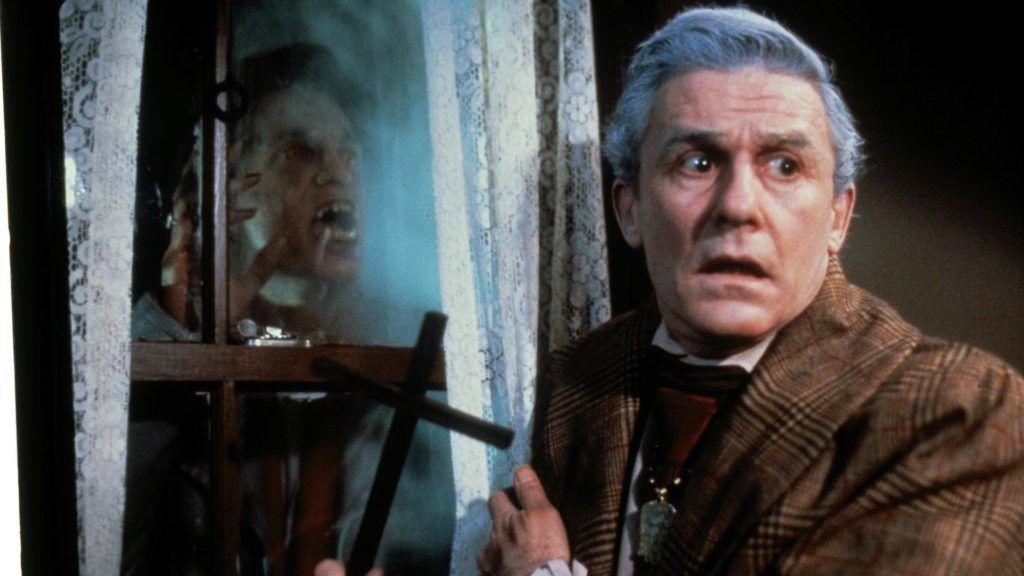 [July 2011 review] In the light of the upcoming remake, interesting to look at this one and see how it has stood the test of time. The answer is not badly: while the 80’s-related aspects are now horribly dated and a huge distraction [Bearse’s hair and fashions in particular, though I’m not complaining about a soundtrack that includes both Sparks and Devo!], the core idea is still solid. Teenager Charley Brewster (Ragsdale) is convinced that new next-door neighbour Jerry Dandrige (Sarandon) is a vampire, responsible for the string of murders which have been taking place in his community. Unable to convince authorities, he turns to horror host and self-proclaimed “vampire killer” Peter Vincent (McDowall), only to find him not much help at all. Meanwhile, his girlfriend Amy (Bearse) is feeling strangely attracted to Dandrige, so can Jerry convince others of the truth and save his babe from becoming another late-night snack to the bloodsucker?

The performances are really what save this one, rescuing it from cheese: McDowall in particular is excellent, his character’s name a homage to two horror legends, either of whom you can easily imagine filling the role. While it might have been even cooler if they had, this is pretty damn good. Sarandon brings his own style to what is, largely, an old-school vamp, with an aversion to crosses, holy water, etc., along with a creepy paedophile vibe as he draws Amy in to his circle. This straightforward approach is what has helped the film last, simply pitting good against evil, and the upcoming remake [with David Tennant replacing McDowall!] seems like a good move. Richard Edlund’s effects are generally not bad for the time, though the make-up job on Amy is not up to the rest of the FX work.