“…nobody tells anybody they’re coming to a joint like this…”

Is Vamp the perfect B-Movie? No spoilers this early on, however this in turn begs the question: what makes a B-Movie?

Hold that thought, for this is a joyous, self-aware, happily silly and delightfully daft film. It is also (mostly) very well paced with many neat touches along the way, pared back to all that’s required to cutely provide entertainment on enough levels for your happy, relaxed and unchallenged viewing pleasure. Beers are nice to have, but not necessary for enjoying this confection.

As with much in the film the plot is suitably skimpy with two pledges wanting to join a desirable college fraternity and so setting themselves the task of supplying a stripper for a party. Needing a car for such an endeavour, the must enlist the ‘willing help’ of a fellow student. The three then set off to the city heading for a shady strip joint at the dag-end of town that opens only ‘after dark’.

Sadly, due to time travel not being available in 1986, Keith (Makepeace), AJ (Rusler), and Duncan (Gedde Watanabe), have yet to see From Dusk Till Dawn and so stumble headlong into a nest (is that the right term?) of stripper vampires. And ‘much fun’ ensues.

Jones, Dedee Pfeiffer and Baron are also amongst the ensemble, with Baron able to get into a role with more than two-dimensions, his performance standing out as the tacky dialogue and silly action clatters along nicely. The other standout is Watanabe who has a good role to play with. Oh, and Lisa Lyons also appears – you either know her or you don’t – and if you do then clearly you have been very naughty and deserve to be… …uhm… sorry… where was I? 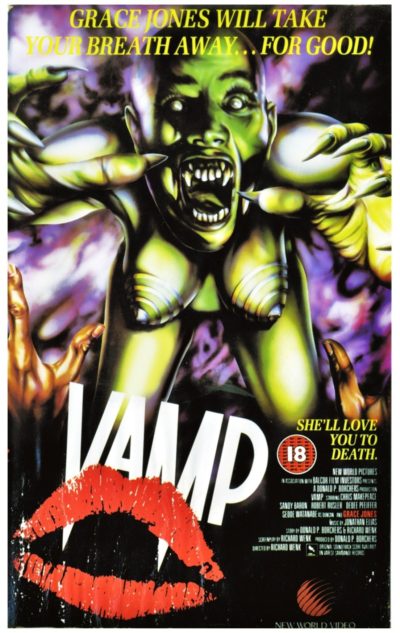 Slightly to my surprise this film has aged far better than I have and also more gracefully (sorry) than expected. Whilst looking a little dated, it still feels fresh – sadly I can manage only the former. The club that forms the backbone for the romp is perhaps the neatest, cleanest, best decorated strip-club that… errr… a good friend of mine has ever been to. And this is the place where Grace performs perhaps the least erotic striptease of all recorded history, and where the audience’s stunned silence is absolutely the right reaction, albeit for all the wrong (implied) reasons. Although, in fairness, I suppose that it is at least memorable. As well as awfully awful.

The three principals (Keith, AJ and Duncan) are all charmingly gormless and guileless as is the fourth musketeer Allison/Amaretto (Pfeiffer) and Katrina (Jones) is (perhaps thankfully) given zero lines to say through the entire film, although she does at least get to sing over the closing credits – and the song’s not bad. So, some good news there then! Overall, the acting is well up to the level demanded by the script, which is to say ‘not by necessity good’. Instead, don your suit of thin character and say the words. Actually I’ve been way too harsh; they all play their parts with joy, energy and elan, ably helped by the minor players who loom ominously and/or portentiously. It all combines to lift what might have been execrable, into the realm of the really pretty good. They’re having fun, and so should we.

The music is nicely spaced out with some decent gaps in any background or mood music for breathing space, in this well paced single story that is told simply and without fuss. Along the way there’s enough snappy one liners and moments of comedic nonsense, as well as some deftly cute touches too. The cinematography didn’t really register, so I guess was also functional, although some of the stylistic lighting works quite well.

“…don’t forget our single-man special. All you can drink for a dollar, come alone you drink yourself into another world…”

And now for the fly in the ointment. The ending. What was taut becomes slack, the pacing drops noticeably, the whole event sags rather and the ending feels almost tediously drawn out. Which is a real shame, as overall the film is actually pretty good and definitely worth watching.  It just peters out and ends with a resoundingly limp ‘meh’.

So, is it the best B movie? No, not in my book where Tremors remains at the number-one spot. It is, however, well worth a look and the end-credits deserve your attention too – as with much here they’re neatly, cleverly and crisply done, and so I feel a little sad giving it only a C+. But there it is; I have.