This is a film in desperate need of ferocious editing. Inexplicably, it’s 125 minutes long, and would work considerably better at… maybe 45? For it’s almost an hour and 20 minutes before anything truly meaningful takes place, and by that stage I was wondering if Chris would fall for it, were I to stage some kind of seizure as a means of escape. The heroine is Clara Banks (Wright), a teenager who has found a lucrative sideline in “flirty fishing”; hanging out on dating sites, luring in men and sending them other people’s racy pictures in exchange for gift cards. She blows off the concerns of her best friends (Nasim and Naipaul) as to the potential risks. But then Betty Roberts (Bell), the already unstable wife of the local pastor, finds saucy emails on the family laptop that point to Clara, and is not happy about it. Perhaps related (or perhaps not): the serial killer operating about town, carving Biblical quotes in to the flesh of their victim. 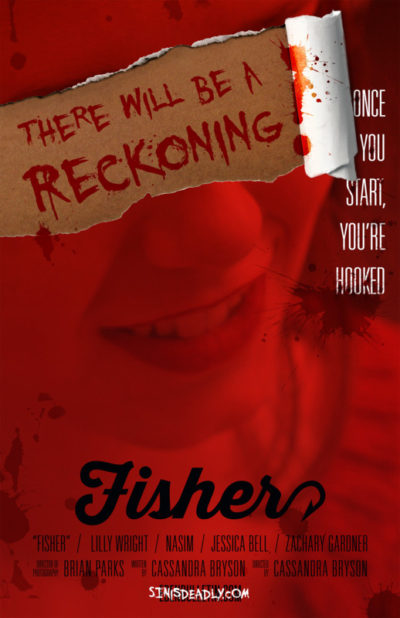 This was on thin ice from the beginning, with the convenient way Clara keeps a Bible on her nightstand, allowing her to decode Biblical quotes. Because, of course, that’s standard bedside reading material for catfishing teenage girls. But it’s really the pacing which is far and away the problem here. Before we get to anything even remotely interesting, we have to sit through a welter of high-school drama, introducing us to a selection of largely uninteresting characters, and accompanying them on their lives during the week leading up to Halloween. For example, if you want to watch an extended montage of teenagers painting banners for a “Trunk or Treat” event – this is the film for you. Even single scenes are needlessly extended. We do not need to see, in real-time, characters walking across the school courtyard to go sit on a bench. The furthest away bench, naturally.

It doesn’t help that Clara is irreparably stupid i.e. using her regular email for her fishing exploits, and not very likable. There is the core of a good idea here. Perhaps if it had focused instead on Betty, for Bell is quite a good actress. We could have watched her gradual mental disintegration, for reasons both psychological and pharmaceutical, with Clara instead a supporting character (whether innocent or not). This would certainly have been preferable to watching Clara and her mates sitting around her bedroom, or sending email. For another problem with films like this, which has the Internet as a major element, is that watching someone use it is inherently dull.

It builds to a climax on Halloween Night, where someone manages to get stabbed in the arm and leg, without actually leaving any blood behind (there are other continuity errors too, such as a shifting paint smudge, and teleporting syrup bottle). I did like the ending, which takes an unexpectedly bleak turn, and does give significant meaning to some earlier elements which seemed pointless at the time, such as a stain on someone’s shirt. However, it came about 115 minutes too late.