Y’know, I’m not certain I ever saw the Roger Corman original on which this was based. I’m obviously aware of its existence, yet if I did watch it, there appears to be no record of it. Initially, I was a bit sceptical about the need for a musical remake, costing around… [reaches for calculator] 830 times the cost of the original. Yet, by the end I had largely been won over, not least by the surprising darkness of the story. I mean, the hero feeds his girlfriend to a carnivorous plant. Okay, she was asking for it: no, she literally asked for it. Still, between that and the ending where the plants are well on their way to taking over the world, this is not exactly The Sound of Music.

That said, I’m not a fan of most of the songs, which appear to be a shallow pastiche of Motown and doo-wop, not exactly my favourite genres to begin with. There are a couple of exceptions, both cases where the performances sell the material with enough enthusiasm. The first is by sadistic dentist Orin Scrivello, played with exuberant flair by Steve Martin. He manages to deliver lyrics like “I thrill when I drill a bicuspid/It’s swell though they tell me I’m maladjusted” and make them meaningful. The other is show-stopper Mean Green Mother from Outer Space, the first Oscar-nominated song ever to be sung by a plant (Stubbs, of the Four Tops, gave voice to Audrey II). Or to contain profanity, incidentally. 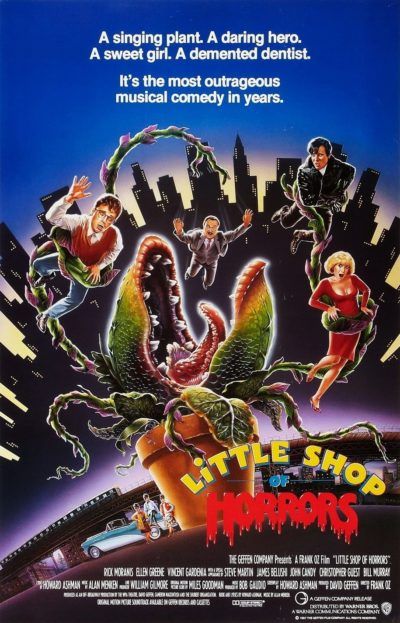 It working so well, is testament to the amazing design and execution of Audrey II, in all its stages from adorable little shrub to world-threatening and city-stomping behemoth. These days, it would be a relatively easy task for CGI; back then, however, it was a masterpiece of puppet construction and performance. The level of articulation displayed, down to multiple different points of lip movement, is startling, and especially in the second half, truly does bring Audrey II to life as a character. Director Oz, of course, already had top-tier experience in puppeteering from his work on The Muppet Show and The Dark Crystal, but this is another level, with up to forty people required to work Audrey II.

[Spoiler warning] What sticks in my mind is the finale – at least in the director’s cut – which has Audrey II and his floral siblings rampaging through city streets. It didn’t surface properly for a quarter century, because it tested horribly in preview screenings. Said Oz, “It was just fantastic…until we killed our two leads. And then the theater became a refrigerator, an ice box. It was awful and the cards were just awful. They were saying that they hated us killing them. You have to have a 55 percent “recommend” to really be released and we got a 13.” This led to it being replaced with a happy ending: I haven’t seen this version, and can hardly imagine it compares to the glory of seeing a giant plant doing its best Godzilla impression.

As the above implies, it also includes the deaths of the two main sympathetic characters in Seymour Krelborn (Moranis) and Audrey (Greene). They both work at Mushnik’s Flower Shop in a rundown part of Chicago – actually, recreated in Pinewood. Seymour finds Audrey II in a Chinese emporium (have people not seen Gremlins? Weird things bought from a Chinese emporium are always trouble…), and its unusual nature becomes a draw for the store. After accidentally cutting his finger, Seymour discovers Audrey II thrives on blood (I guess they’ve never seen Hellraiser either: oh, wait, that came out the following year), even beginning to talk, and its needs eventually push Seymour over the edge, with Audrey’s abusive boyfriend, the dentist mentioned above, becoming the victim of choice.

That’s a moral Rubicon Seymour has crossed, and although further deaths follow, he decides Audrey II must be stopped. This is where the theatrical version deviates from the director’s cut. The former has Seymour electrocuting Audrey II and escaping with Audrey to a new life in suburbia, albeit with a baby Audrey II in their garden. The director’s cut is more in line with the off-Broadway play. Audrey is mortally wounded by Audrey II, and in a scene I found hard to swallow (pun intended), requests to be fed to the plant, so she can always be with Seymour. His efforts to destroy Audrey II fail, resulting in him being eaten too – so I guess they do end up together – and leading to the plant’s play for world domination (below). 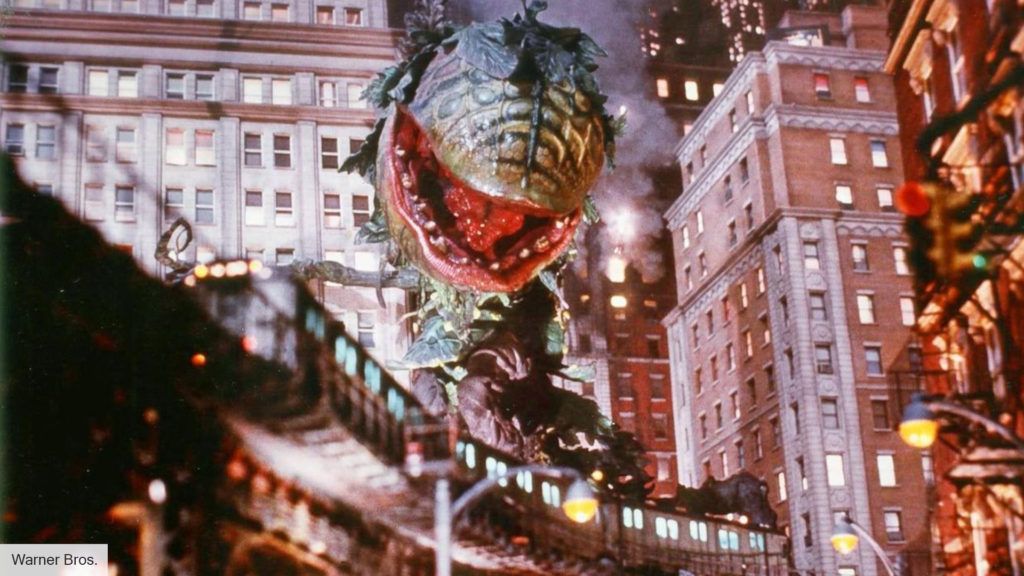 After The Rocky Horror Picture Show, this is the second musical horror based on a stage-play of the month, and I’d say this one works better on its own merits. Put it this way: I suspect it would not be radically improved by people yelling “Slut!” and lobbing toast at the screen. It does take a while to get there, with the horror elements very much under the radar early on: it’s an aspect which grows as Audrey II does. The whole tone undergoes a change when Seymour feeds blood, initially his own, to the plant. Initially, it’s subtle, yet when he takes Audrey II to a radio station to promote the shot, it becomes a bit… predatory. Things only go downhill, darker and, I’d say, better from there.

Moranis is very well cast, while Greene, who came over from the stage version, takes a bit of getting used to, before hitting her stride. There’s a plethora of Second City alumni present, to the point Chris was surprised to learn it had not been filmed in Chicago. Bill Martin plays a masochistic dental client, a character portrayed by Jack Nicholson in Corman’s version. John Candy, Christopher Guest and Jim Belushi (in the director’s cut) also show up, and for us Brits, keep an eye out for Miriam Margolyes as a dental nurse, and Red Dwarf‘s Danny John-Jules as a backup singer. But the plant’s the real star here.