It’s complicated. My first experience of Rocky Horror was not the film, but the stage play in, I’m guessing around 1986. I didn’t see the film until later, when it was on TV. I was at home from university, and I remember my dad coming in, standing in the door for about ten seconds, then turning around and leaving, without a word. I’m sure he was convinced I had just come out as gay. But that aside, The Rocky Horror Picture Show movie is a very different animal from The Rocky Horror Picture Show experience. The last time I had the latter was in a parking lot with hundreds of other people and a full shadow cast. This is not the same as a cold viewing at home – despite Chris’s best efforts, yelling enthusiastically at the screen.

As a movie… I tend to think it’s not particularly good. A plot it would be kind to call nonsense, performances which are an all-you-can-eat buffet of ham, and one really good song. It requires all the participatory insanity involved in the experience to make it fun. As evidence, much the same people made Shock Treatment, which has no such experience attached, and is borderline irredeemable. Even this feels like a cynical, cold and utterly calculated attempt to make a cult movie. Except, when it came out there really wasn’t any such thing. Oh, things like El Topo were getting midnight screenings, to be sure. But obscure and cult are not the same thing. By all rights, Rocky should have died at birth. It was reviewed badly – where reviewed at all, since the initial release never expanded past eight cities, due to poor box-office. For instance, Time‘s critic sniffed:

“It is not easy to see why this campy trash was a long-running hit in London and a smash success in Los Angeles, except that transvestism has always fascinated the British and the L.A. scene is almost as kinky.” 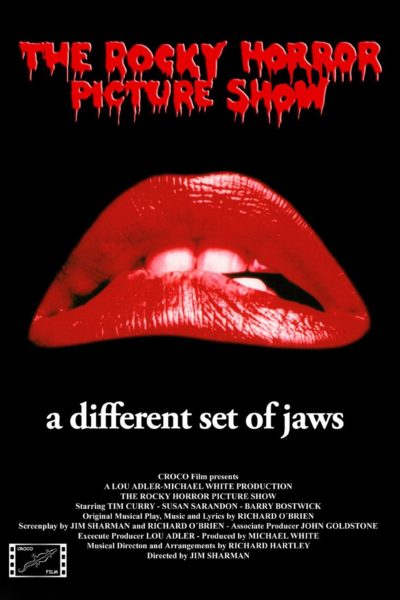 Yet it is now a part of the common culture, championed as a tent-pole of tolerance and acceptance, especially for the alphabet soup community. Which is kinda odd, because it’s pretty fucked up. Frank N. Furter may be a transvestite… or a transsexual, for the film uses the terms almost interchangeably. But he’s a murderous psychopath and a sexual predator, for whom consent is someone else’s problem, and “grooms” both Brad and Janet. Given the hissy fit thrown by groups like GLAAD against Basic Instinct, it’s a little surprising this villainous deviant, executed for his sins, has been so warmly embraced. Not universally though. Per one critical voice: “He fits every stereotype of a trans person ‘tricking cis people into sex,’ and then the cis people fit the stereotype of “if you force it on someone long enough they’ll eventually enjoy it.” Ugh, I hate it so much.” Guess you can never be woke enough…

It’s all as stuffed with references as any entry in the Sharknado franchise, and there’s no doubt writer O’Brien knows his genre movie history. It was even filmed at Oakley Court, used as a location for many Hammer movies, including Brides of Dracula and Plague of the Zombies. Susan Sarandon caught pneumonia during shooting, partly due to the lack of heating on-site. Speaking of whom, she is fine as uptight virgin Janet Weiss, but her transformation into a sexpot is thoroughly unconvincing. I recently saw her in a version of Beauty and the Beast, playing opposite Klaus Kinski, and “Beauty” wasn’t it. Klaus might have been prettier. I imagine an alternate universe where Kinski also took on the role of Frank N. Furter. Charismatic psycho? Sexual predator? Theatrical experience? Sounds perfect. Thanks to the power of AI art, we can see what that might have been like. The horror. The horror…

That said, Tim Curry is undeniably the best thing about this – and I will admit, probably has better legs (top) than Kinski. His performance is pitched at the right level, and illustrates the fine line between trash and garbage. Frank may be an entirely ruthless and manipulative bastard, but portrayed by Curry, he’s charming and appealing. As mad doctors go, he is more Hannibal Lecter  (though one critic called Furter “basically Buffalo Bill with better fashion sense”) than the Josef Mengele his actions might imply. Indeed, I note this came out the same year as Ilsa, She-wolf of the S.S. The two lead characters – amoral, sexually voracious and demanding absolute loyalty from their minions – might have more in common than many would feel comfortable admitting. 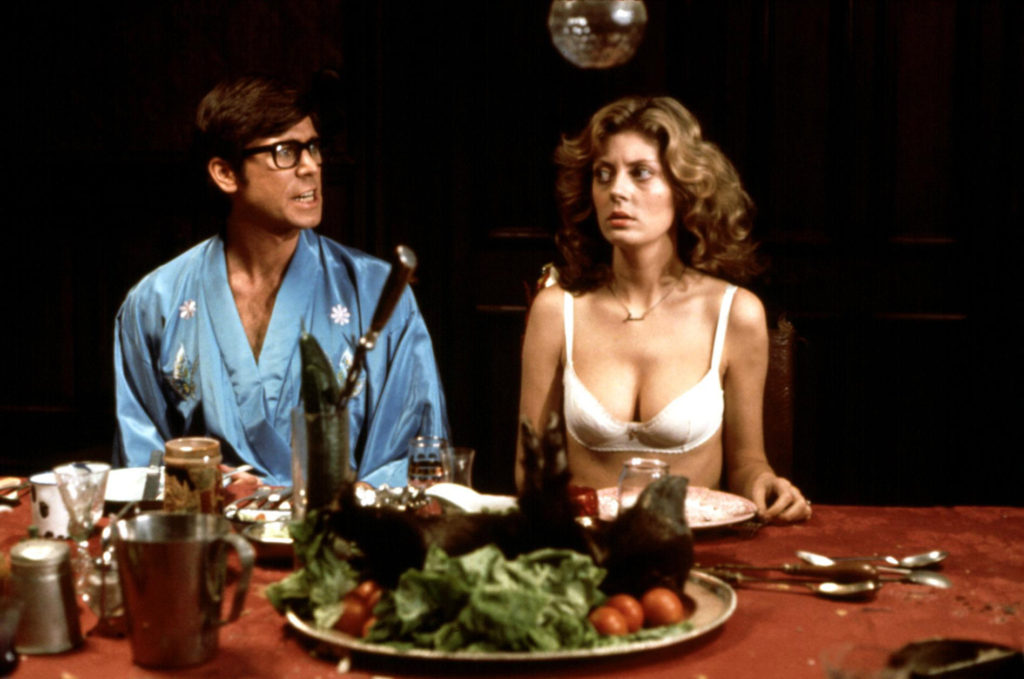 If you want proof of the importance of the lead actor, I refer you to the Fox TV remake with an actual trans person in the main role. This proves beyond all doubt that the math is Rocky Horror minus Tim Curry = unwatchable. [Still, it’s probably better than the episode of Glee inspired by the film. It’s both very rocky, and a horror] Curry sells the material with an energy it often does not deserve: large chunks of it likely made little sense at the time, and even less now. Why should “God bless Lili St. Cyr”? The film doesn’t bother to explain, preferring simply to namecheck people from obscure corners of cultural history. It’s cheap heat at best, and sub-Tarantino junk at worst. I sincerely doubt many fans of it have ever seen an “old Steve Reeves movie”.

Yet, in the end, you cannot separate the film from the experience, and that’s why it’s impossible to rate the film as an independent entity. It was created as a stage-play – starting off in a 63-seat theatre, upstairs on the King’s Road in London, with future Evita Julie Covington as Janet – and always intended to be a live event. It makes sense for the movie to have evolved back into a spectacle of interactive performance art. It’s a musical unlike any other, and even more so, a horror film unlike any other. Subsequent attempts, by both O’Brien and others, to reproduce its successes, only go to confirm its uniqueness.