I was not particularly impressed with this when I first wrote about, all the way back in 1988. This was mostly due to the lack of empathy for the massacred: “I find the victims an entirely unpleasant, unworthy group of leftover hippies who wear such absolutely ridiculous clothes, including the widest flares I think it has ever been my misfortune to see, that they DESERVE to die.” I’m a bit more chill now, I think, and can appreciate the raw roughness on view here. It’s just a very unsettling piece of work, right from the pre-credit sequence, with its corpse sculptures arranged like some grotesque art exhibit at a cemetery. That sets a tone, sustained the rest of the way.

Almost 50 years later, there have been precious few films you can say are “like” Texas Chain Saw. Even the sequels and reboots tended to go off in their own direction, to variable effect. It is a little odd, considering how influential the movie feels. Contrast, say, Halloween or The Blair Witch Project, movies which were not just influential. but often shamelessly imitated in the years that followed. Elements from TCM have been reproduced, but nowhere near to the same extent. Some of Rob Zombie’s films perhaps come closest, leaning into the madness of an utterly dysfunctional family who buy into the whole “Slays together/stays together” philosophy. Yet there’s not quite the same sense of needing a shower afterward, which this generates. 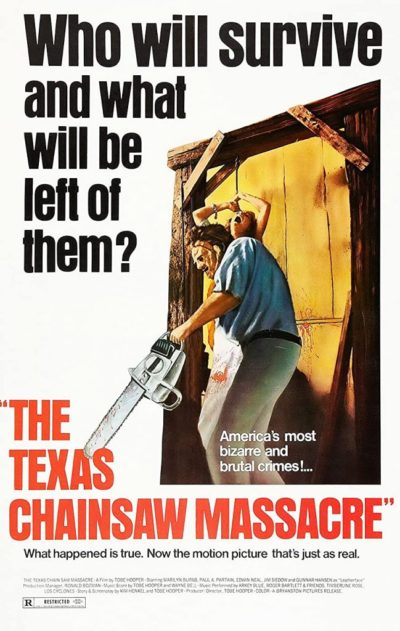 Much like Psycho, it manages to do a lot with a little in terms of explicit carnage. For instance. the only time we see a chain saw touch flesh is at the end, when Leatherface (Hansen) is knocked down from a wrench thrown by the truck driver, and cuts his own leg. Similarly, scenes like the girl being hung on a meat-hook are almost bloodless. Yet this did not stop the film from becoming a byword for cinematic violence in the eighties, and it was refused a UK home video certificate by the BBFC for fifteen years. This was a decision which only elevated its reputation further there: along with The Exorcist and The Evil Dead, it formed the holy trinity of banned horror. This is quite ironic, since Hooper laid off the gore in the delightfully optimistic hope of getting a ‘PG’ certificate from the MPAA.

The set-up is quite lengthy, with Sally Hardesty (Burns), her crippled brother Franklin, and three friends visiting the grave of the Hardesty’s grandfather, after reports of the bizarre grave-robbing antics mentioned above. This seems a pretty weird leisure activity for young hippies, I’d have said. “Let’s go check out your ancestor’s cemetery plot!” is not exactly “Let’s get high, and have fun!” They make a number of cardinal errors, beginning by picking up a weirdo hitch-hiker (Neal), who has a fondness for blades, fire and killing animals. On arriving at the family house, they then split up, Kirk and Pam separately deciding to enter a neighbouring house without invitation. Did everyone forget this is Texas? They subsequently meet their doom at the power-tool wielding hands of Leatherface.

Jerry follows suit, though at least with some justification on going into the house, then Leatherface turns mobile, chainsawing Franklin while he sits in his wheelchair. That’s the last person killed during the course of the movie, and comes a relatively brief time after Kirk gets boinked on the head by Leatherface’s hammer. The rest of the film is, however, an almost incessant exercise in psychological torture. Sally gets chased, runs out a window, thinks she’s found help, gets tied and taken back to the house, endures the absolute dinner from hell, gets offered as a sacrifice to the family’s patriarch, breaks free, runs out another window, makes it to the road, solicits help from a truck driver – whose fate is unknown, vanishing off-screen right – and eventually escapes in the bed of a pick-up trick, with That Look (below). It’s probably going to be years of therapy before any other expression crosses her face. 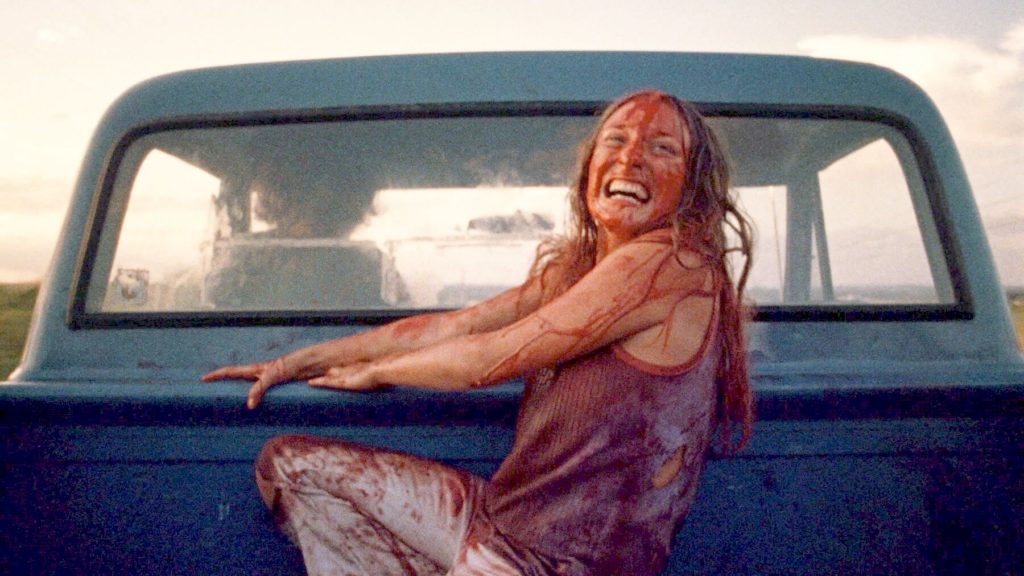 Much credit to Burns, who really sells the absolute descent into hell with a commitment you can only applaud. It’s a rapid plummet. Feels like one minute, she’s hanging beside the van with her brother, wondering where her friends have gone; the next, she’s got her head over a basin, while a geriatric zombie fails miserably to bash out her brains. Should have stuck to “Let’s get high, and have fun!” I’m a bit sad neither she nor the rest of the cast went on to do much else. Hansen eventually had a brisk career in B-movies, probably peaking in Hollywood Chainsaw Hookers. Which is probably as good a place to mention that, despite what I’ve written for 35 years, this movie treats “chain saw” as two words, as confirmed on the film print. I dunno, it just feels… wrong to me.

Perhaps the most icky of the characters is Neal’s old man, because he’s the closest to being able to function in society. He appears to hold down a job, and is capable of appearing to be a lifeline to Sally. [Admittedly, her judgment is a bit questionable by this point] That’s almost scarier than the cartoon countenances of Leatherface or The Hitch-hiker, monsters to whom any right-thinking person would give the widest of wide berths. He says, “I just can’t take no pleasure in killing. There’s just some things you gotta do. Don’t mean you have to like it.” Wait, what? “Gotta do”? You could just go to the supermarket and get your meat in nicely sanitized freezer packs like the rest of us? The footage of cows awaiting their doom points similarly to this being vegetarian horror: less ‘Meat is murder’ and more ‘Murder is meat’. But unlike Guillermo del Toro, it would take considerably more than this to put me off a nice bacon sandwich, even temporarily…