Not many directors have ever put together three consecutive mainstream movies of such quality and popularity as John McTiernan. Despite only having the largely forgotten Nomads under his belt, in succession he then made Predator (IMDb rating 7.8), Die Hard (8.3) and The Hunt for Red October (7.5), a total for the three of 23.6. That’s only fractionally less than peak Spielberg: Raiders of the Lost Ark (8.4), E.T. the Extra-Terrestrial  (7.9) and Indiana Jones and the Temple of Doom (7.5). total 23.8. It’s a higher tally than peak Scorsese, and I’m trying hard to think of any genre-friendly director who can match McTiernan’s trilogy. Stanley Kubrick is one candidate, though I’m not sure how “mainstream” I’d call A Clockwork Orange.

Almost as spectacular is McTiernan’s subsequent fall from grace. After October, his only feature to rate better than a 6.6 is Die Hard with a Vengeance, and his career basically ended with the disaster which was the Rollerball remake, over 20 years ago. Matters haven’t been helped by him being embroiled in legal issues, culminating with a year in federal prison for perjury. Still, we’ll always have his earlier work, and in this case, what I’d say is one of the top sci-fi action films of all time – arguably, surpassed only by Aliens. Though you’ll note the absence of the horror genre in my description. I think it does qualify, certainly containing horrific elements; it’s just at a lower level than the other two categories, which feel more essential to its existence. 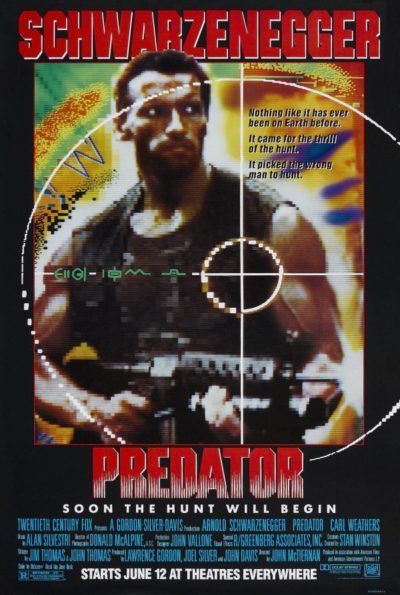 Much like The Thing, it opens with footage of an alien’s arrival on Earth, though here, it’s both deliberate and in the present days, instead of being a prehistoric crash landing. The focus then shifts, and you’ll be forgiven for forgetting all about it, in light of what happens. Dutch (Schwarzenegger) is part of a covert ops rescue team, sent “over the border” into an unnamed Central American country, ostensibly to rescue a foreign cabinet minister and his aide from the rebels who have captured them. At least, that’s what they’re told. It’s not long before things begin to go a bit pear-shaped, beginning with the discovery of skinned Green Beret corpses. Turns out, the mission is really to prevent a Soviet-backed (hey, it was the eighties) incursion.

This is where the film begins to take its swerve, from what has, to this point, largely been a straightforward action movie. Dutch and his crew, as well as Anna (Carrillo), a guerilla woman they took prisoner, head to their scheduled extraction point through the jungle. However, it quickly becomes clear something is hunting them. Something alien, almost invisible and whose superior technology makes it a match even for “Old Painless,” the M134 minigun wielded by Blain (Ventura – the other future governor of a US state here, beside Arnie). Which, it must be admitted, is one of the coolest personal weapons in any film ever: Googling tells me it can fire up to six thousand rounds per minute. God Bless ‘Murica, and I don’t care how “unrealistic” it is.

The middle portion has the previously invulnerable American soldiers being handed their asses in no uncertain fashion, until it’s just Dutch versus the alien. Naturally, it’s an old-school jungle-trap that proves decisive, after Dutch realizes he can hide from the hunter’s thermo-vision by coating himself in river mud. Yet another key factor here is the design and execution of the alien, which is genuinely alien, with its crab-like features and xtro-dreadlocks. It doesn’t lack for sheer bulk either, played by the 7’2″ Kevin Peter Hall, who manages to look surprisingly graceful despite the costume. Mind you, it would have been interesting had the makers gone with their original choice: the 5’9″ Predator from Brussels, Jean-Claude Van Damme.

What I’d forgotten is how – again, not unlike Aliens – incredibly quotable Predator is. It’s not just Arnie, and not just his cheesy “Stick around” line after impaling a guerilla with a knife. Here, in no particular order, are a selection of my favorite lines. If you aren’t working at least one of these into your life every day, you’re doing it wrong. 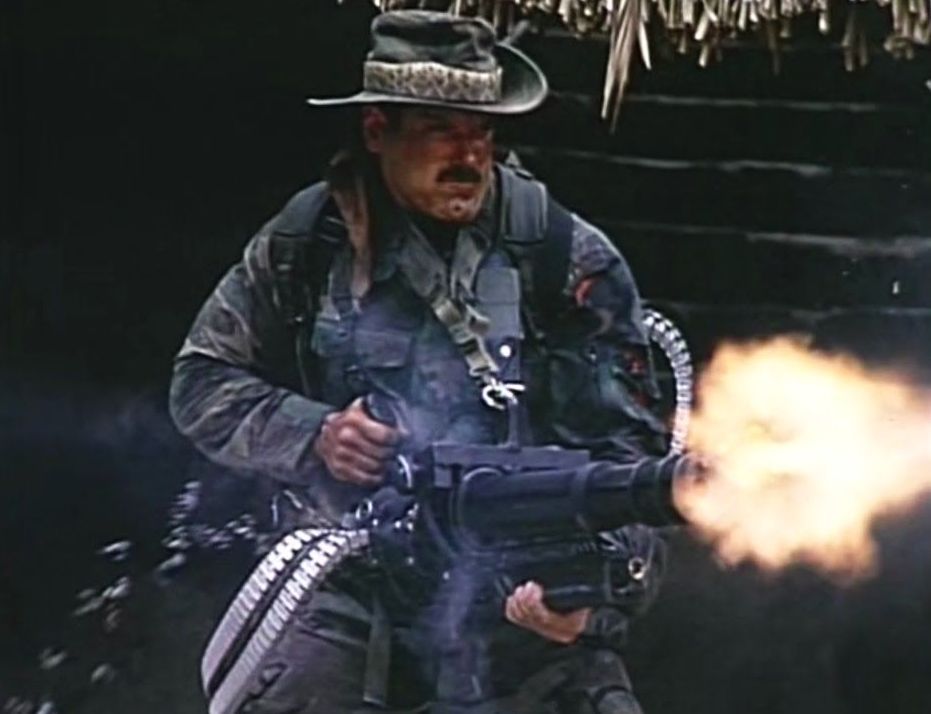 Perhaps surprisingly, it was not universally loved on release, the LA Times proclaiming, “All the action is bogus, all the dialogue monosyllabic cliche. If the producers or director John McTiernan threw out or changed some of it, it’s a pity they didn’t throw out more.” This didn’t stop it from making the top ten in the North American box-office for the year. I remember originally seeing it at the movies on a weekend trip to Guildford, which is about as far from the steamy Central American jungle (or the Mexican locations) as you can get. I’m a little closer now, yet this still stands up very well.

It’s an unashamedly macho piece of work, with just one female speaking role, and that consists mostly of doom-laden pronouncements in Spanish. Everyone else are the type who engage in mid-air arm-wrestling bouts, joke about the size of their girlfriend’s pussy, and willingly violate the sovereignty of Central American countries at the drop of a vaguely written operational memo. Again: hey, it was the eighties. These days, Anna would likely be the heroine: as proof, you need look no further than the latest entry in the franchise, Prey, where an indigenous woman was the central character. It was certainly better than most of the sequels which followed this, probably because Prey stuck closest to the template set here. If it ain’t broke, don’t fix it – and there is precious little here in need of repair.