Just when you think you’ve seen every possible iteration of the zombie genre possible, along shambles this French entry, to prove there is still some original juice to be squeezed out of it. However, “original” doesn’t necessarily equate to good, and after a brisk opening, this becomes more grating than endearing. It begins somewhat as you’d expect, with a mad scientist carrying out human experiments, apparently to try and create controllable serfs. Since we first meet him dancing down the corridor to a very perky Eurodance tune, it’s hard to take him that seriously. Inevitably, his creations escape, and go on the run. 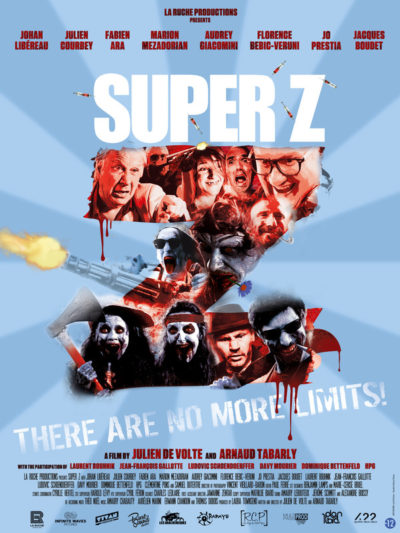 Which is where things take a sharp right, since it appears they are not your typical zombies. They can speak, for one thing, and use tools. In fact, they function as a family unit better than some I’ve seen on Jerry Springer. It consists of dad Gertre (Libéreau), mom Stephana (Julien Courbey), and their two daughters, Georgette and Marcelline. There’s also Yvon (Ara), a young wannabe rapper they pick up and infect along the way. After they hide out in a remote farmhouse, he falls in love with Augustine (Mezadorian), the still-alive daughter of the farmer next door. This idyllic pastoral existence (see family mealtime, top) is threatened, as the CEO behind the project has hired a group of mercenaries to reclaim his property, dead or… um, dead, by any means necessary.

It is novel, though not unique, e.g 2007’s Aaah! Zombies!! a.k.a. Wasting Away to see a horror-comedy film shot from the zombies’ point of view. The issue here is mostly that they aren’t exactly likeable or fun to be about. For instance, it appears whatever they went through, removed all inhibitions, leaving Gertre and Stephana banging like the proverbial outhouse doors. The latter in particular, comes off like a Gallic version of Monty Python’s  Pepperpots, with her high-pitched shrieking especially rough on the ears. Given the blue make-up, I did laugh when the merc leader refers to them as “Smurfs.” I would suggest an alternate title of Killer Smurfs Go Wild, except I suspect that’d quickly lead to a copyright air-strike from the owners of that IP.

I am going to wheel out review cliché #22, and state that this would have made a great short film. It starts and ends strongly enough, although the digital gunfire effects are woefully lacking in real-world impact. The romance between Yvon and Augustine is kinda adorable, and I wish more had been made of that: the final shot before the end credits roll is particularly effective. The parents are far less appealing, and their shrill yelping at each other – there’s some really weird audio manipulation going on too – got so bad, Chris contemplated mounting a rare offensive to try and wrest mastery of the remote control away from me. You may be better off turning the volume down and reading the subtitles instead.