Don’t believe the breathless hype of shills like Brad Miska. This is not some kind of new frontier in horror, and I’m certainly not taking reports of viewers of this requiring ambulances at face value. If that happened at all, I’m guessing the victim choked on their super-sized nachos, and this was parlayed into cheap publicity. The reality is, this is more or less just another cheap slasher film. If you’ve seen Terrifier, which achieved a certain notoriety for The Bit With the Hacksaw, you’ll know exactly what to expect. The sequel is a little slicker, and has a number of fairly impressive and extended kills. But it’s a case of two steps forward, two steps back.

Not least in the latter category is its mind-numbing running time of 138 minutes. That’s longer than Rosemary’s Baby or Aliens, both of which have a lot more going on then “It’s the first anniversary of Art the Clown (Thornton) killing people. He’s doing it again” which is all the plot of significance here. You can basically ignore the first hour, before things get going properly here. Oh, there’s stuff about siblings Sienna (LaVera) and Jonathan (Fullam), whose late father had a connection to Art. Do not worry about this, since it goes nowhere of importance. It certainly is not a movie inhabited by smart people. For example, they spend half the time on their phones, yet nobody ever bothers to call the cops. 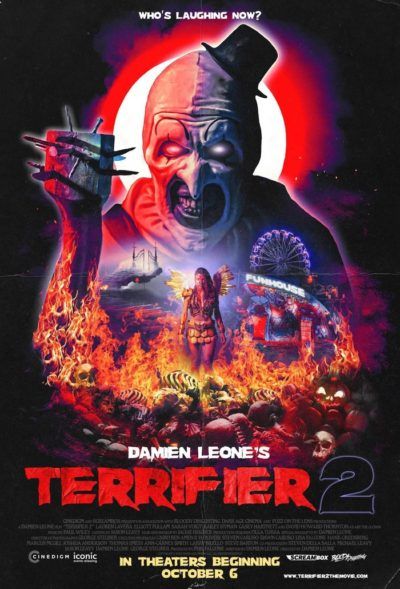 Yet within its two hours and eighteen minutes are moments to remember. Art feels a slightly more rounded character, despite remaining a man of few words i.e. none at all. There’s an odd yet strangely endearing sequence of him visiting a laundromat to wash his blood-drenched clown suit. It’s the kind of everyday action rarely seen from the antagonist in a slasher film. Also: that laundromat is getting a five-star review on Yelp, because it gets every stain out, returning the suit to pristine whiteness. This and his other little quirks help give Art more personality than some, though his muteness does inevitably cap the level to which he can rise.

It’s definitely not his personality which led to any ambulances being called though. We’re here for the laudable amount of practical gore, with bodies being mangled in unusual and quite spectacular ways. I’m not convinced anything quite reaches the level of The Bit With the Hacksaw; forewarned may be forearmed in that department. Yet there are some brutal deaths among the supporting cast – naturally, Art fails to follow through in the same way on Sienna, even when she’s lying there, unconscious, in front of him. Again: not a smart movie. On the other hand, if you fancy seeing somebody stabbed, scalped, flayed and dismembered, all while being kept alive, this movie delivers (top). It’s probably less excruciating than Chris Jericho’s utterly pointless cameo in the post-credit scene. That’s likely the most horrific thing this has to offer.