Well, unlike the previous entry, this is not Polanski mugging in lieu of acting, or attempting to do comedy. So we’re already ahead of the curve there. It’s back in the world of cloying, claustrophobic horror, where a young woman is manipulated by those around her. A fairly constant theme in Polanski’s work and, again, one which perhaps has to be viewed askance in the light of subsequent real-life events. It’s also one of the relatively numerous “modern Satanism” movies which came out over the late sixties and into the seventies. In particular, this came out the same year as Hammer’s The Devil Rides Out, which beat this to cinemas screens in the UK, but trailed it in the US.

It is a surprise to see it was produced by William Castle, noted purveyor of rather less cerebral terrors such the The Tingler, previously reviewed in this series. Castle was so keen on the idea, he worked to get the rights before the source novel by Ira Levin – a “Jewish atheist”, if that’s not a contradiction – was even released, and based purely on the galley proofs. Paramount agreed, but only if Castle found someone else to direct: he did get a cameo, playing the man outside the phone booth from which a terrified Rosemary calls her doctor. Neither lead was the first choice. In a different universe, the film could potentially have starred Sharon Tate and Robert Redford. [Let’s face it: Polanski wanted everything to star Tate] 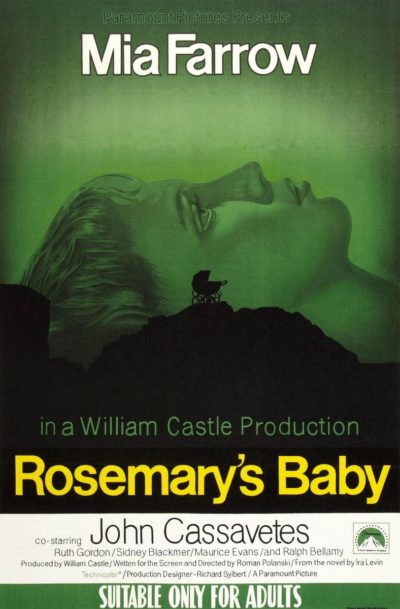 The net result is something which, as much as anything, gets us vowing never to live in a New York apartment. That prospect may be the most horrific thing the film offers, though the one here appears about the size of the Overlook Hotel, offering an endless series of passageways and interconnecting rooms. Yet you can still hear every squeak your fellow residents make, up to and including their satanic chanting, and they insist on popping round every five minutes for a cup of tea and your unborn child. That’s why we live in a house, which offers separation from those on either side. We’re with Robert Frost: “Good fences make good neighbors.”

Compared to my previous review (below), I think I felt the latter stages were more successful, albeit at the cost of the earlier ones. Rosemary feels very easily manipulated, and I definitely would have been nopeing the fuck out of there much quicker. The movie is at its best towards the end when the paranoia becomes almost overwhelming: she tries to explain the situation to outsiders, yet at the same time, Rosemary is acutely aware of how insane (literally) the whole thing sounds. I did also like the deadpan exchange early on between Rosemary and another young, female resident:
– “I thought you were Victoria Vetri, the actress.”
– “Everyone says that, but I don’t see the resemblance.”
It is Victoria Vetri, from When Dinosaurs Ruled the Earth, now operating under the name Angela Dorian.

As someone who is far from religious, this kind of movie is always going to be a hard sell. It’s likely the same reason why I tend to regard The Exorcist as good, rather than great. When you don’t believe in the core concept, it’s capacity to terrify is inevitably limited. I think I find human evil to be a scarier idea than supernatural evil, and that is going to cap horror movies that lean on the latter at about this level. There’s more than enough evil in the world to go around. I don’t think we really need to make up additional sources of it.

[July 2013 review] Interesting to watch this on the same day as the Evil Dead remake and realize that the one made almost 50 years earlier, is still the better horror movie. It’s a completely different animal, of course: very little in the way of explicit gore or even violence, relying more on a sense of creeping paranoia and growing dread. But that main reason for its success, is that you actually care about the central character and her fare, rather than her being just a slab of meat getting fed into a grinder. Rosemary (Farrow) and her husband Guy (Cassevetes) move into a new apartment in New York, and everything initially seems idyllic, especially when Rosemary becomes pregnant, albeit after what would not be called “date rape” at the very least. 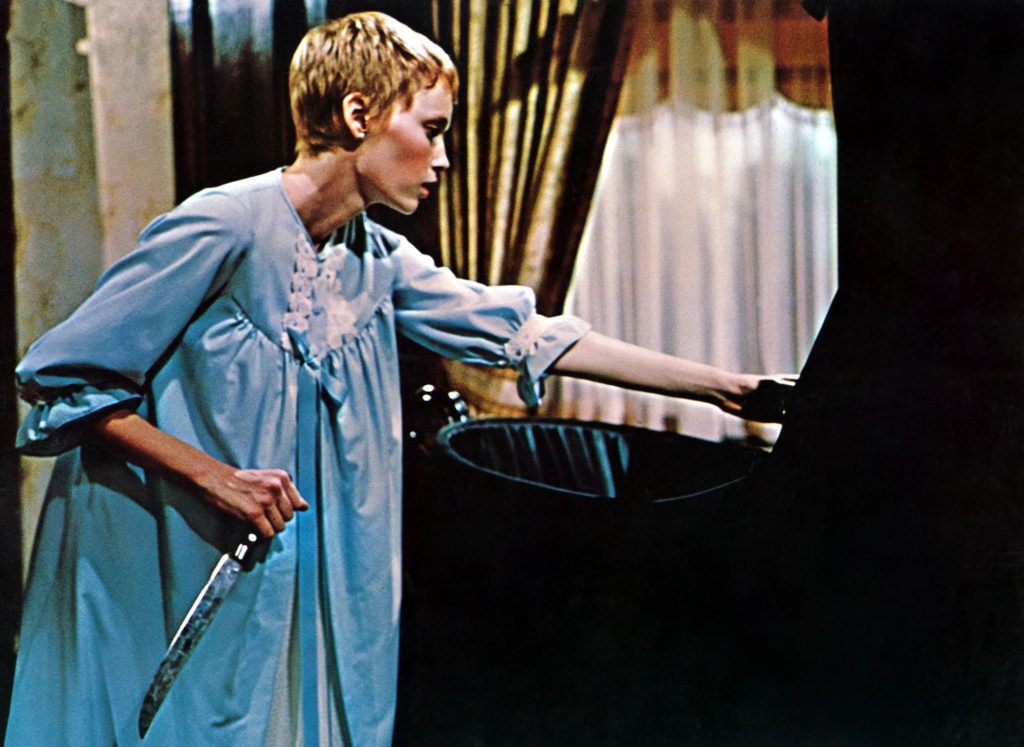 Sure, there’s issues – a girl Rosemary meets flings herself out a window shortly afterward, and their neighbours Minnie and Roman (Gordon and Blackmer) are a little too friendly – but it’s not like the couple haved moved in to the middle of a cult of Satanists, now, is it? Oh, wait… Hmm, maybe that nightmare about being impregnated by the Devil wasn’t just the product of a fevered imagination. There are unquestionably elements of this that are badly-dated, not least the fashions – whoever dressed Farrow should be taken out and shot, even by the low standards of the sixties, and the cringe-inducing product placement for Vidal Sassoon’s hair-styles is painfully amateurish. There’s also a laughable angle where Rosemary is clued in to Roman’s evil nature by the fact he has… pierced ears!!! Clearly the mark of someone through whom evil runs like mother’s milk.

Such silly changes in society are hardly the makers’ fault, however, and the film does a beautiful job of treading the line between threat and danger. By which I mean, there’s never anything quite sufficient to justify her running screaming from the premises, until it’s too late: only when you start to put the pieces together does the threat become clear, and that could just be preggie paranoia. Admittedly, it does topple over into cliché at the end; however, it has still aged remarkably well, and I dread the day the inevitable remake comes out, crapping the bed. Because there’s precious little here (in cinematic terms at least) that is in need of improvement. B-