I suspect this may be the Hammer movie where general and my personal opinion diverge most sharply. This is a 7.0 on the IMDb, and 95% fresh on Rotten Tomatoes. But it just doesn’t cut it for me. I think the main problem is that it’s one of the few films they made which really needs good effects to succeed. This was never Hammer’s strong suit. They were great with other aspects of production, such as costumes and sets. But when it came to creating the non-real, the results were typically closer to The Gorgon than One Million Years B.C. A lot of the time, this didn’t matter too much. But when you set up a titanic duel between the forces of good and evil on the astral plane, you need to be able to deliver something at least approaching it. This film, unfortunately, can’t even fake someone driving a car in a semi-convincing manner.

It’s a pity, as the film mostly does the little things right. Though calling the performances of Lee and Gray as “little things” hardly does them justice. Without them, the film would likely collapse under the weight of its own ridiculousness, but both men sell the concept for all it’s worth. Lee, in a rare heroic rule as the Duc de Richleau, is especially plausible, and manages to overcome vaguely ludicrous concepts such as the cocktail party Satanists. [I guess 1968 was a big year for devil worship. This came out between the US and UK releases of Rosemary’s Baby] Gray, meanwhile, exudes charismatic menace playing cult leader Mocata, making it easy to  see why Bond villainy lay in his future. As discussed in my earlier review (below), he gets arguably the best scene and perhaps the single most menacing line in the studio’s output, crafted by writer Richard Matheson. 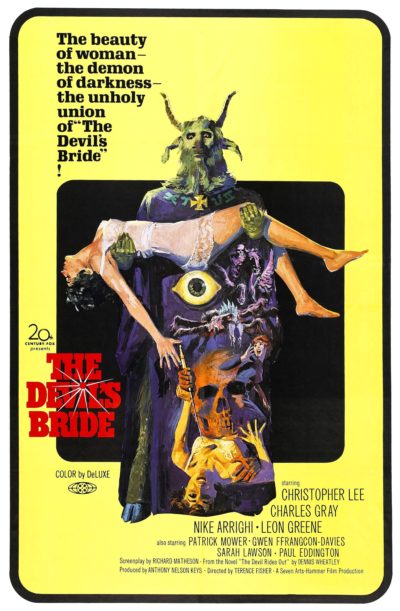 The problems become all too apparent whenever the film is required to back up its talk. There are a host of things which must have seemed great on the written page, yet the execution of them is embarrassingly poor. Witness the summoning of the devil himself (where, the previously stressed rule about there having to be 13 in attendance suddenly doesn’t apply). This remarkably chaste bacchanal never gets any hotter than a bit of totty giving wannabe Satanist Simon (Mower) some side-eye. That sound you hear is Aleister Crowley, widely regarded as the inspiration for Mocata, snorting derisively. I can only presume it was this scene for which the choreographer mentioned in the opening credits was used, though at least this doesn’t sink to the interpretive dance depths of The Witches.

Still, the same sense of “That’s it?” permeates the other spectral and Satanic entities, in particular the Angel of Death who appears to have popped in from the clearance aisle at the local Halloween costume shop.  The end result flops at its most important scenes, leaving Gray and Lee to do their best to rescue things, before the next disappointing spectacle arrives. Lee had been a prime mover in the film being made, having encouraged the studio towards getting the rights for several years, though Hammer were cautious of censorial reaction. After its release, he frequently said how he would have loved to appear in a remake of this – only, y’know, with good effects. I can see his point.

[November 2010] I have memories from my youth of Dennis Wheatley collections, advertised in the back of the Sunday supplements. I seem to recall a photo of a nekkid blonde chick, with her hands tied behind her back, used to promote these. When I eventually got to read the stories at college, I was rather disappointed – and not just since there was no nekkid blonde chick in them, also because they really weren’t very well-written, with a reliance on coincidence and contrivance that rendered them implausible. The same is largely true here. There is a great performance at its core from Lee, as the “white occultist” Duc de Richleau [I can see why Lee often states this is among his favourite roles], large chunks of this are difficult to believe, even allowing for the suspension of disbelief necessary to begin with, for any film about black-magic. 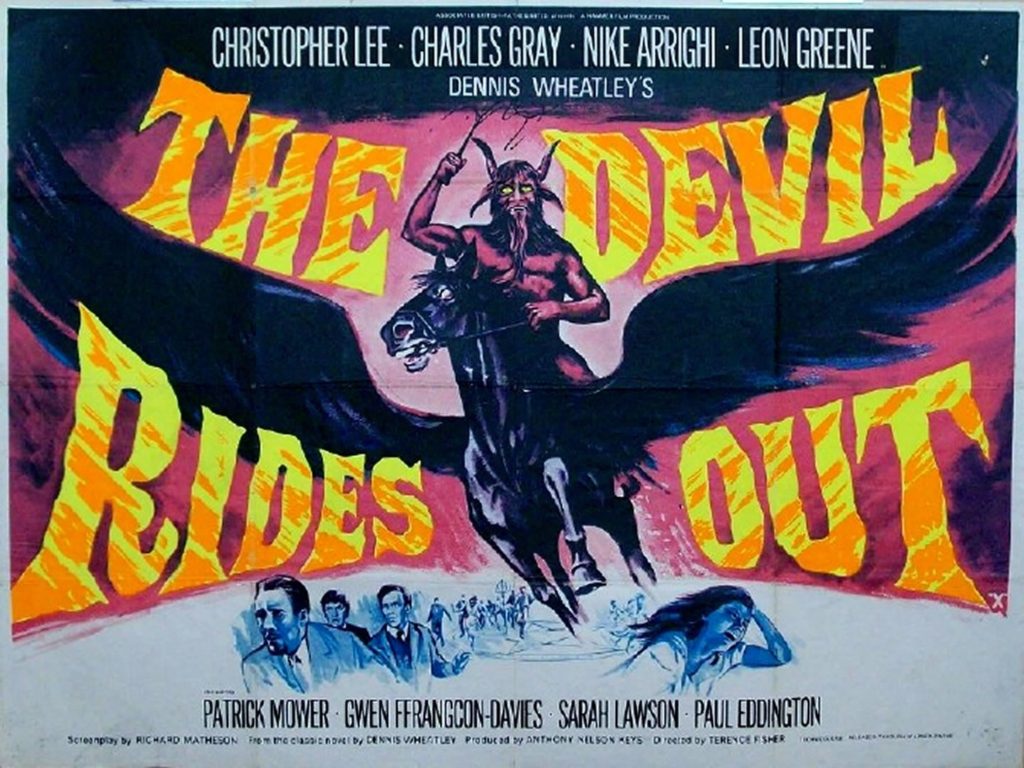 The Duc and his friend Rex (Greene, dubbed for some reason by Patrick Allen) go to pay a visit to their friend Simon (70’s TV icon Mower), who seems to have dropped out of circulation, and find him involved with an “astronomical society” run by Mocata (Gray). You can’t pull the wool over the Duc’s eyes, however. He soon spots it’s actually a satanic cult [What gave it away? Was it the massive goat’s head mural on the floor? Or the sacrificial animals locked in a hamper?] and manages to convince the sceptical Rex of this, after an encounter with a djinn. Our pair set out to rescue Simon, and co-n00b Tanith from Morcata’s clutches, with the assistance of the Duc’s niece and her husband (the latter being Paul Eddington, also recognizable from The Good Life). Needless to say, Mocata isn’t standing for that, and fights back with all the powers at his disposal, both his own and those of the creatures he commands, up to and including the Angel of Death himself.

The dark arts are terribly genteel here. Up until the final confrontation (which might not actually take place, in a monstrous cop-out), it simply feels like Mocata is exercising freedom of worship: the “Satanic ritual” from which Simon and Tanith are rescued looks more like a chill-out rave than anything. Morcata pops round for a friendly chat with the niece and to exercise his hypnotic powers, but hardly seems dangerous, except when taking his leave: “I shall not be back. But something will…” That’s a rare moment of menace in a film that is otherwise almost entirely non-threatening, and largely flops flat as a result, despite the best efforts of Lee, who gets a rare chance to play the hero in a Hammer movie, and makes the most of it. Shame it was in one of the studio’s least-impressive scripts.