Turns out this was adapted from a Hong Kong TV series of the same name. I can only hope that its inspiration was considerably more coherent. For viewed on its own – where it showed up on Netflix – this is borderline incomprehensible to a new viewer. It looks very nice, and does have some decent action set-pieces. But do not expect a well-explained plot. You get thrown in to the deep end almost immediately, and the makers don’t seem to care whether you sink or swim the rest of the way. I mean, I’ve read the synopsis on Wikipedia, and still could not provide a literate summary which made sense. 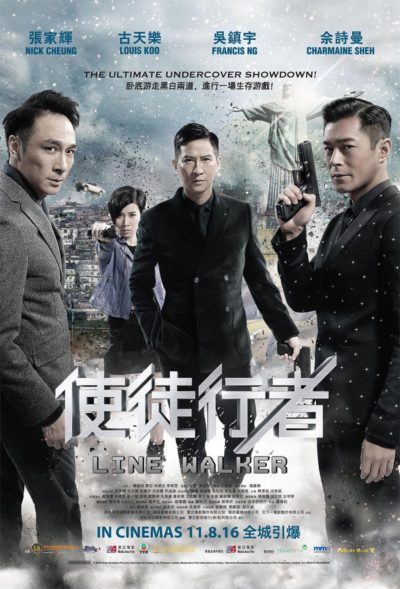 The basic concept is that old standby of Hong Kong movies, undercover cops and robbers. In this case, it seems the records of the former were destroyed, because… reasons. This left the top operative, code name Blackjack, stuck in his embedded location, and trying to re-establish contact with Inspector Q (Ng) and his partner, the immensely irritating Ding (Sheh). Meanwhile, inside the gang run by Tung Pak-ho, there’s a power struggle going on between Blue (Cheung) and his right-hand man Shiu (Koo), despite their long-standing friendship. Which one is Blackjack? The answer will eventually be revealed after a drug deal in the favelas of Rio de Janeiro goes spectacularly wrong. Yet that is by no means the end of the twists, with deaths both fake and real, as well as Blackjack not being the only “lost” undercover operative still swimming around in the criminal pool.

As noted, it is perhaps a little unfair to judge this by itself; I presume most of the audience will have watched the series which preceded it. However, with that not being available on Netflix, this can only be rated on its own merits, and the scripting in particular seems woefully inadequate. There’s a real lack of focus; it begins looking like it will be about Q and Ding, then in the middle, switches to Shin and Blue. I kept waiting for it to go back, and by the time I realized it wasn’t going to, had largely lost any connection to the film and its characters.

I only found myself interested when the action kicked off, in particular with Rio providing an original and well-used backdrop, scenes unfolding across the city, from the slums to an empty stadium (left over from the Olympics?). These are energetically executed, and Kenny Tse gives everything a slickly luminescent look. Although this is the cinematic equivalent of an exquisitely-wrapped box of stale Hershey’s milk chocolate: far too good for the contents. Sheh is the only actor here whose performance makes any kind of impression, with the rest of the cast as blandly attractive as they are forgettable. Unfortunately, in this case, it’s the kind of impression I could have done without, her comic face-pulling severely at odds with the generally dark tone of proceedings. Go watch Infernal Affairs again instead of this.