Of course, this is all very silly. It feels a bit like a 21st-century version of Highlander, with a hero and villain, both possessing mad fighting skills, roaming New York and battling each other for dominance. There’s even the whole teacher-student thing happening on the side of good – at least, until disrupted by the villain’s sharp weapon, anyway. But let’s not stretch the similarities too far. It begins in Japan, where sensei Takeda (Igawa) chucks Masazuka (Ihara) out of their ninja training school for being a jerk. The expelled pupil then goes off and uses his skills for evil, in the employment of Temple Industries. 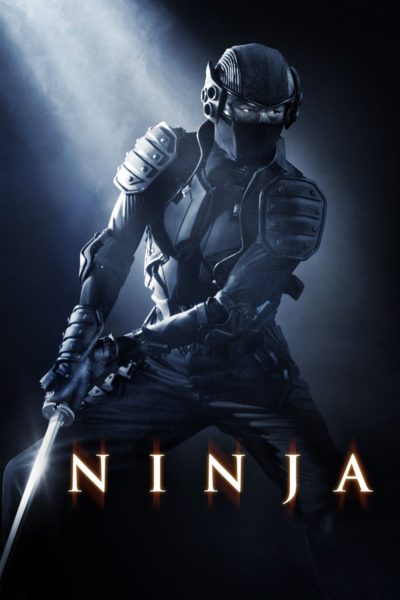 Years later, Takeda is about to announce good student Casey Bowman (Adkins) as his heir, when Masazuka returns, seeking to claim the inheritance – a set of ninja equipment known as the Yoroi Bitsu. To avoid that, Takeda ships it off to New York for safekeeping. This sets up the war mentioned above, with Casey and Takeda’s daughter, Namiko (Hijii), being pursued by Masazuka and his minions. The resulting fights take place on a train going through the subway, as well as on police station roofs, a university campus and at Temple Industries headquarters. Even if the whole ninja thing passed its sell-by date with the demise of Cannon Pictures, I have to admit, I still enjoyed this a lot. Silly or not, everyone is taking it Very Seriously, and that matters. Really, if you can look intense while dressed like Adkins is shown at top, you probably should be Oscar-nominated.

It helps that Florentine’s impalement game is on point, with any number of impressively stabby deaths. Normally, the use of CGI in martial arts films is something at which I make disapproving noises. However, it’s done right here, used to enhance the impact of the physical skill on view, rather than replacing it. And there’s no denying the talents of both Adkins and Ihara. Heck, even Hijii and Igawa have their moments (the former showcases some impressive crutch-fu). However, it’s when the two leads face off that the action is at its best. There’s a slight sense of ancient vs. modern, with Masazuka enhancing his abilities with the likes of night-vision goggles, while Bowman – after getting his arse kicked, naturally! – resorts to cracking open the Yoroi Bitsu.

Admittedly, the story is hardly innovative (though going by the… ah, “interesting” way Masazuka ties up Namiko after capturing her, he seems to be a fan of kinbaku!). Meanwhile, the whole thread about Temple Industries, and their boss leading some bizarre combination of Nazi/occult group, never goes anywhere of significance at all. Their meeting looks more like some kind of unfortunate LARP group than a world-dominating conspiracy. That angle is, fortunately, easy to ignore. Even if you’ll probably guess the significance of Bowman’s sword before he does – Chris certainly did – the meat of this meal is a perfectly cooked Kobe burger, with plenty of American cheese on top.