In the early 22nd century, the Northern hemisphere has been decimated due to biological war, while the Southern half of the world has collapsed due to the resulting famine. Now, the wasteland which is Argentina has become a dumping ground for the infected, hungry for flesh, who are dropped out of planes by the North. In the middle of this hellish setting wakes a man (Prol) with no memory of who he is, or how he got there. About to become a victim of the infected, he is rescued by Padre Blanco (Fontova), whose small group of hardy survivors inhabit a compound nearby. 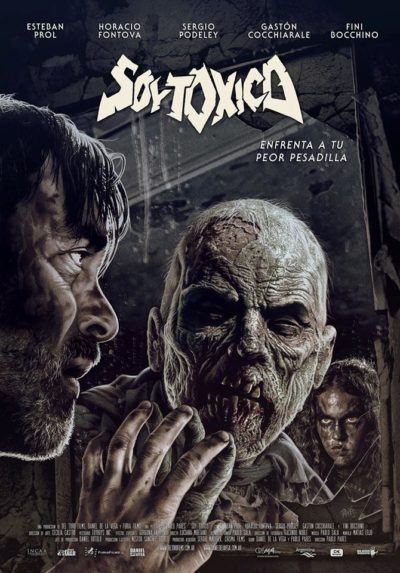 At first grateful for their help, the tables are turned on the man – named “Perro”or “Dog” by the group – after he discovers he is one of the infected, who Blanco calls “the dry ones”.  His memory loss is one of the early symptoms, and it’s only going to go downhill from there. Before his new pals can carry out their intent of torturing him to death, Perro escapes with the help of a mute girl (Bocchino) who is part of the group. He eventually finds allies in the shape of other infected, who are not as entirely animalistic as they seem. It’s time to turn the tables on Padre Blanco; yet Perro’s past is gradually returning, and his memories may not just explain how he came to be in the desert, but offer some other, unwanted surprises.

Parés has been a one-man Argentinian studio of the living dead, with his Plaga Zombie film having been the first such made in the country, and being followed by three more entries, all told from 1997 through 2018. This seems to fall into similar territory, yet I think it’s rather more serious in tone. There isn’t much humour to be found here – a pratfall involving a meat-hook is about as light-hearted as this gets – and it benefits from particularly good use of sets and locations. This post-apocalyptic world is unceasingly grubby, with not a surface (or character) that is not caked with ingrained dirt, and there’s a real sense of nihilistic desperation, especially among Padre’s clan. You need to be prepared to do anything to survive here, and you sense they have already done unspeakable things.

The characters are fairly spartan, and the film is deliberately light on dialogue. This does leave the viewer having to do a fair bit of work in terms of assembling the story, though when the payoff arrives, it’s not bad. Without giving too much away, the ending almost feels like it could be an origin story for Imperator Furiosa, and certainly lends a double-meaning to the movie’s title. This is, at least, considerably more coherent than the last film by the director I saw, Daemonium: Soldier of the Underworld., which was baffling, if certainly never boring. In contrast, if there are occasional dead spots here, I didn’t feel I’d had my time wasted.