If someone re-made Power Rangers at the end of a long pub-crawl, you’d likely end up with Psycho Goreman. Young siblings Mimi (Hanna) and Luke (Myre) uncover an alien artifact in their back yard, which imprisons and controls ‘a nameless evil’ that previously wreaked carnage and havoc across the galaxy. Now Mimi can order the creature – named “Psycho Goreman” over his objections, “I don’t see how that’s better than Archduke of Nightmares” – to do her bidding, even though he’s not exactly happy about it. But when the ripples of his reawakening cross the galaxy, Pandora (MacCulloch) is sent to end the threat once and for all. Yet is the cure perhaps worse than the disease? 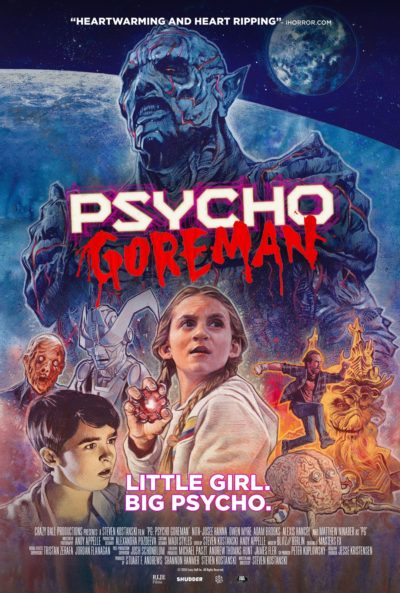 This is, make absolutely no mistake, an entirely ridiculous film, which proudly wears an entire block of cheddar on its sleeve. The creatures are a glorious selection of latex creations, including the giant, crawling brain thing into which one of the neighbourhood kids is turned by PG, because… Well, because it night be vaguely amusing, which is more or less the rationale the film uses for just about everything else. But it’s at its best in the interaction between the kids and their new “pet”, such as when they try to explain the concept of love to him:

“You know, have you ever felt all warm and fuzzy about somebody?
“Like when you rip out your enemy’s spine and display it to their grieving family?”
“No, not… no, not exactly.”

This plays nicely with the relatively restrained reactions most of the world have to him, and I’d like to have seen more of this, rather than, for example, their parents, whose relationship is just… weird. There’s a feeling of Calvin & Hobbes here too, not least in the insanely complex game invented by the kids, Crazy Ball – a match of which decides the fate of the universe. Going further down that road, maybe it might have worked better to have the parents believe PG was some kind of imaginary friend invented by their children? I dunno, just a thought. The setting seems firmly nineties too, yet that isn’t particularly relevant beyond some occasional, off-hand references.

If the adults are generally bland, credit must go to Vlahos as the voice of Psycho Goreman (Matthew Ninaber provides the physical presence), who provides exactly the kind of delivery needed by lines such as, “You’ll be spared the sight of your planet being torn to pieces, watching as everyone you hold dear is drowned in a sea of their own blood.” Hanna and Myre also hit the spot; as someone with an older sister. who was occasionally not entirely sympathetic, shall we say, I could relate to Luke rather well. Though my sibling never managed to gain control of a ruthless being who had amassed power beyond measure, and was preparing to strike down all that was good in the known universe. Probably for the best, that.