Rie (Sønderris) is a photojournalist who is working on a project about an extension to the Copenhagen metro. On a trip to the front of the dig, she attempts to blag her way onto a maintenance job, only to be thrown out by the supervisor (Heili). However, a fire then breaks out behind them, and to survive, Rie gets sealed into a chamber along with two workers, Croatian Ivo (Mikic) and Eritrean Bharan (Semere). As the oxygen dwindles, and hopes of rescue from outside appear to fade, tensions begin to rise among the trio. A decision has to be made as to whether to make a break for it. Though answering that question only poses further ones, about who should go, and where. 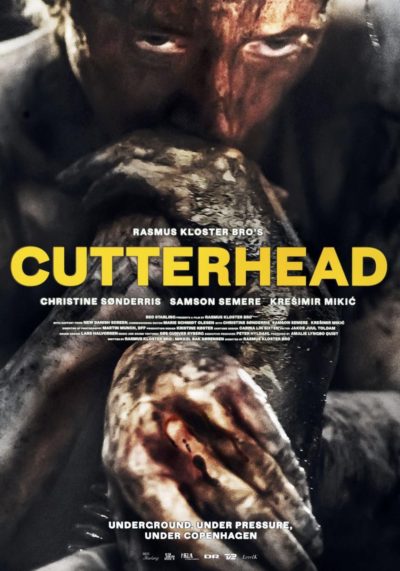 Bro certainly nails the claustrophobic intensity, in a way I haven’t seen since The Descent. You feel the walls closing in, right from the opening as Rie sinks into the bowels of the earth, and the further on she goes, the smaller and more cramped the setting becomes (and the greater the frequency of close-up shots). The bulk of the film’s 86-minute running time takes place in a single compression chamber, though the film never bothers to explain the need for pressurization, or what the “intervention” in question is. I suspect having the film shot in English might have caused more problems than it solves, though it enhances the sense of cultural clash. For instance, when she’s interviewing a worker who clearly doesn’t understand the questions she’s asking.

The main problem is, there’s not much else apart from claustrophobia. Rie comes over as a bit of an arrogant bitch – actually, make that mostly – with a sense of entitlement. She seems to think her daughter should give her survival priority; never mind that Ivo has kids of his own back home. I’m fairly sure her unlikeability is entirely deliberate, with the film largely a depiction of how, when the chips are down, people will throw each other under the bus in order to live. Yet this kind of survival thriller depends to a significant degree on the viewer being invested in the character and their struggles. Here, I couldn’t help thinking society would not be greatly troubled if Rie didn’t make it out alive.

It also felt as if the story unfolds in a rather contrived fashion. For example, the sudden appearance of a rescue party comes out of nowhere, and the same is true of the ending, which can only be described as awkward for everyone concerned. There isn’t much sense of organic flow in those aspects, which seem to occur because they are necessary to the plot. You do have to give props to the actors, for literally getting down and dirty in what can only have been a challenging and unpleasant shoot, especially the swimming through muck. Yet that’s not enough to justify its existence, and when the end rolled around, I was left feeling surprisingly little.