I don’t think I’ve seen any of the entries in the franchise since the original, and even that was last seen eight years ago. I had actually watched and reviewed this film then, and wasn’t that impressed, due to “a storyline that’s so muddied in the exposition, I had to explain it to Chris – and, to be honest, that was only possible because I’d read a synopsis on Wikipedia prior to watching.” Re-viewing it for Project Adkins, I was considerably more impressed – or perhaps just didn’t care. It may be for the best if you haven’t seen the other movies, as that way, you’ll be discovering what’s going on alongside lead character John (Adkins). 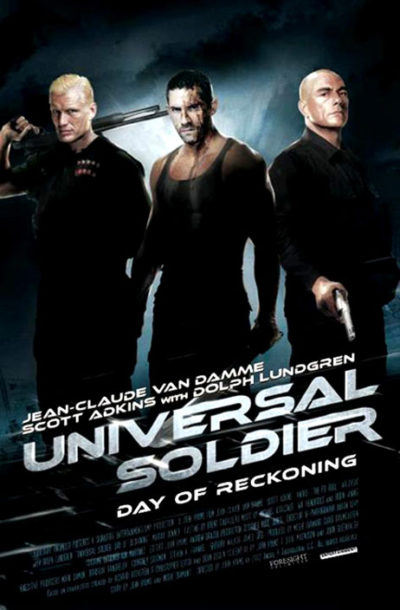 After a home invasion in which his wife and child are brutally slain, he spends nine months in a coma. Post-recovery, he begins to seek out the man responsible, former soldier turned terrorist leader, Luc Deveraux (Van Damme). Except, almost nothing is what it initially seems. For instance, Deveraux is actually working with Andrew Scott (Dolph Lundgren) to liberate programmed soldiers, created by the government, from their masters. And John seems to have had an double life he can’t totally recall – choice of phrase entirely deliberate – with people apparently knowing him, that he has never met before. These include convenient stripper, Sarah (Bonner), who helps John figure out what’s going on. Well, until her usefulness runs out, and the script lets her wander off. Probably back to being a stripper.

This now seems like a far better remake of Total Recall than Len Wiseman managed. It dances nicely along the line of how much John can trust his own memories; how much is he being manipulated by those supposedly on his side? It’s certainly filled to bursting with sex and hyper-violence, gleefully used in a very Verhoeven-like way. [Definitely see the director’s cut if you can. This was initially cut to get an R-rating] The fact the artificially-enhanced warriors can both dish out and take enormous punishment, is used to great effect. This reaches its peak in a sporting goods store brawl between John and his pursuer, Magnus (Arlovski), after a car-chase between two vehicles that are apparently as equally indestructible as their drivers. Their fight ends in a truly “Fuck me! Rewind that!” moment involving a baseball-bat. Well, in the unrated version, anyway.

There also can’t be many martial-arts films which refer to Apocalypse Now. But John’s final journey up-river, where he eventually faces off against a heavily face-painted Deveraux (top), appears to make this one. It’s here where the truth is revealed, albeit only after John has to mash his way through an entire base of enemies, with the game level apparently set on “Ultra-violence.” In both, it feels as if Aeon Flux – the original animation, rather than the live-action – may have been an inspiration too. Yet, if this does sometimes feel like a grab-bag of homages, it’s also very much its own beast, and is a very long way from 1992’s original.