Beginning in 1953, the CIA carried out a series of covert experiments, aimed at determining the feasibility of putting what can loosely be called “mind control” into practical application, such as for facilitating interrogations. The techniques used involved sensory deprivation, various forms of abuse and, in particular, dosing subjects with psychoactive drugs, in particular LSD. Not all the participants were willing, or even aware of their involvement, which led to unfortunate results. The most well-known is likely Frank Olson, an army biochemist, who jumped from a 13th-floor window to his death, a week after having been given LSD without his consent. In 1973, the CIA director ordered all documentation regarding MK Ultra destroyed, and the program was ended. [/conspiratorial whisper Or was it?]

This film, however, takes place over the peak of the operation, in the sixties. Ford Strauss (Mount), a researcher into the use of drugs like LSD to treat mental illness, has his funding yanked. He is then approached by shadowy CIA agent Galvin Morgan (Patric), who makes Strauss an offer he can’t refuse: continue his work under the agency’s budget and oversight. However, there will be a few… changes to the protocols, with Strauss being provided with the dregs of society – junkies, whores and the feeble – to act as subjects. Ford, blinkered by a desire to keep going with his research, doesn’t stop to ask questions. Anyway, the concept of “informed consent” was something seen as bordering on Commie propaganda at the time. 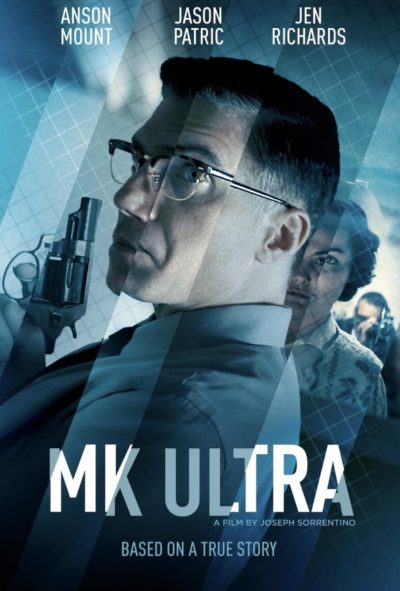 However, as things proceed, and he sees the appalling way in which the subjects are treated, Strauss eventually reaches a tipping point and comes to see his actions are a betrayal of his Hippocratic oath: in particular, “First, do no harm”. To drive home the fact this is based on real events, the dramatic elements are intercut with documentary footage, such as interviews with participants, or the famous 1965 experiment in which Spanish researcher Dr. Jose Delgado stopped a charging bull by activating a brain implant. [/conspiratorial whisper That was over 50 years ago. Think things haven’t progressed since?] Also of note, writer-director Sorrentino is, apparently, an ex-intelligence officer. I say “apparently”, as Google has little more to offer regarding him. Which I guess makes sense: spies tend not to have Facebook.

This is slightly too dry for my tastes, perhaps because the focus is on little more than a handful of people, over a period of what feels like only a few months; in reality, it involved thousands, and the project lasted for twenty years. It’s a grubby and quite depressing tale: while not inappropriate, given the subject matter, you may feel in need of a mental shower afterward. Mount and Patric are both good though, and that kept me watching when the (lack of) plot development threatened to undercut my attention. If you’re unfamiliar with the topic, this has the potential to be quite disturbing. Those already aware of the project probably won’t learn much, yet it may remind them of the human cost at the program’s dark heart.

The film was released on October 7 and is available on demand now.