“or Pardon Me, But Your Teeth Are in My Neck,” as the jokey alternative title goes. Perhaps you had to put this review down, and hold your sides together, because they were in danger of splitting asunder at that slice of comedy gold. Or, it probably elicited next to no reaction at all. Because this is the worst kind of horror-comedy: the kind which is not funny in the slightest. Polanski demonstrates all the aptitude for humour of week-old roadkill, failing miserably across the board in his triple-threat roles as director, co-writer and actor. To his credit, he seems to have realized his own limitations, abandoning both comedy and acting in his own movies going forward. However, that does little to mitigate the general wretchedness of what we have here.

Let’s begin with the positives, however. Likely the chief saving grace is the look of the movie. Right from the opening shot, of a sleigh going through a snow-covered landscape, which almost looks too real, the film is luscious. Cinematographer Douglas Slocombe, who’d be Oscar nominated three times between 1972 and 1981, does a sterling job of capturing both the locations in the Italian Dolomites, and sets such as the ballroom in the castle of head vampire, Count von Krolock. [He’s played by Mayne, who’d subsequently portray Dracula in a not-dissimilar movie, The Vampire Happening, as well as a doctor in The Vampire Lovers.] There are shots of Tate peering out a snowy window, which immediately reminded me of similar shots of Nastassja Kinski in Tess, though that future Polanski work had a different cinematographer. 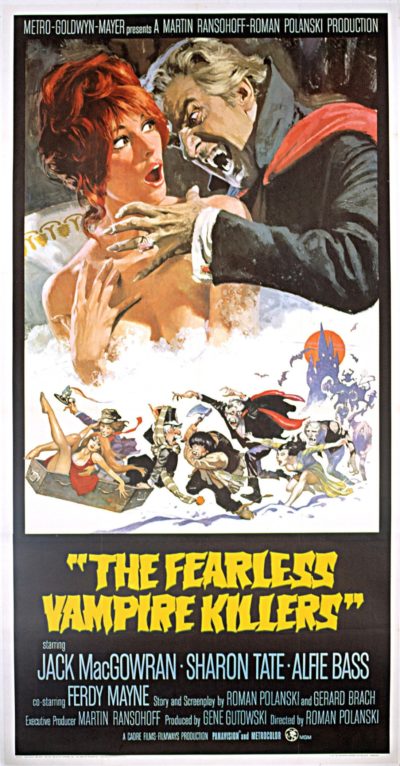 There are a couple of somewhat interesting twists on traditional lore, including the inclusion of a Jewish vampire (Alfie Bass). When a potential victim tries to deter him with the traditional crucifix, he replies, “Oy, have you got the wrong vampire!” There’s also the Count’s son, Herbert (Ian Quarrier), who is gay. While Hammer would shortly strip-mine the lesbo vampire field, homosexual male vampires would remain almost invisible for far longer, with this one of their earliest depictions. Creepy sidenote: Quarrier was a friend of Tate’s, and should have been at her house on the night the Manson family paid their visit. He got into LA late and decided not to bother. After that, Quarrier retired from film-making. But in the light of Polanski’s later legal issues, it’s perhaps worth noting that in 1996, Ian received a police caution for indecently assaulting two girls.

But I digress. Though digressing is considerably more entertaining than talking about the rest of the film. In particular, the twin black holes of charisma at its centre. MacGowran and Polanski play Professor Abronsius and his assistant, Alfred, respectively. They are on a quest through middle Europe for… vampires, I guess, even though their apparent ignorance of them is staggering. The inn in which they are staying is raided by von Krolock, who abducts the innkeeper’s daughter, Sarah (Tate). He takes her back to his castle, preparing to offer her as a snack at an imminent vampire get-together. The Professor and Alfred follow, only to find themselves trapped, and can only watch as the bloodsucking guests rise from the earth below. With the help of some dubious science, they escape and sneak into the vampires’ ball, hoping to get the girl, kill the baddies and save the entire planet.

Christ, it’s dull. Quite how this has a higher IMDb rating than the sublime Quatermass and the Pit is a complete mystery to me. But then, the IMDb does seem to have a bit of a hard-on for Polanski. Consequently, by the time we’re done here, he’ll have had three entries in the series, the most by any director. At least for the other two, I could see why they were so highly rated, even if I do not necessarily agree in totality with the assessment. This is just leaden, heavily reliant on prat falls and physical comedy such as the Professor getting hit on his noggin or stuck in a window for an extended period. Considering how cerebral Repulsion was, such a low-brow approach is particularly disappointing. It makes yesterday’s entry, Carry On Screaming, seem like Shakespeare in comparison – or, at least, Noel Coward. 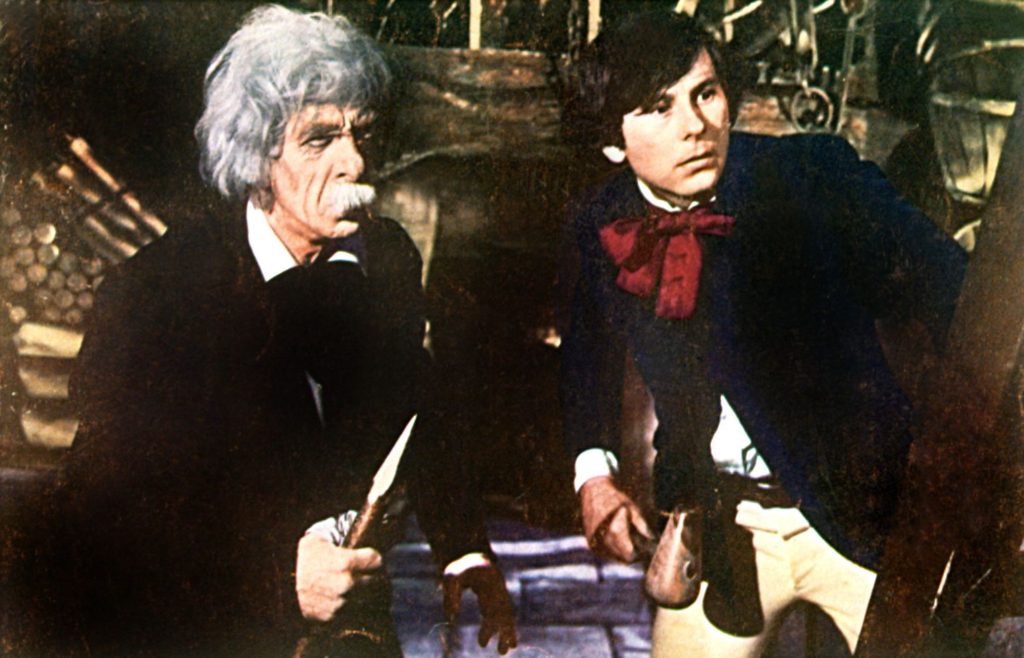 There is one sequence which definitely feels as if it could have drifted in from a Carry On, where Sarah and Alfred talk at cross-purposes, with her asking him if she can have a bath, while he wildly misinterprets lines like “Do you mind if I have a quick one?” Otherwise, this feels as if writers Polanski and Gerard Brach were still unfamiliar with the English language, and so there are significant chunks of this which take place without much dialogue. Which would be fine, if the movie had anything interesting to offer in the place of speech, as far as driving the narrative is concerned. Unless you’re interested in seeing a pair of idiots bumbling their way around an apparently endless series of castle corridors and rooms, there is not. It feels every one of its hundred and eight minutes long. Hey, at least Polanski started dating his future wife during the production.

One thing I did not realize. This became a musical, Dance of the Vampires, including a score written by Jim Steinman which apparently lifts a lot from his own back catalogue. It appears still to be quite popular in Austria and Germany: Polanski himself directed the original 1997 Viennese stage production. But an attempt to bring it to Broadway in 2002 – without Roman, obviously, due to that pesky child molestation thing – was a complete disaster. Despite the presence of legend Michael Crawford as Count von Krolock. the production closed after fewer performances than it had previews, losing an estimated $12 million. It become one of the biggest flops in theatrical history. Well, until Spider-Man: Turn off the Dark showed up, anyway…