Cue the first selection by the chosen criteria which genuinely surprised me, mostly due to the high rating. At 6.8 on IMDb, this topped the horror rankings for the year – ironically, ahead of four of the Hammer movies it loosely parodies. It also has the highest score of any entry in the Carry On franchise. My original review (below – it also details the plot, so I won’t bother here) suggested I didn’t agree with that elevated opinion. This time, I think I enjoyed it slightly more, though it did still suffer from major problems of pacing in the middle. Perhaps having absorbed the entire Hammer horror catalog made me more receptive to its humour?

It also borrows heavily from The Addams Family, which started in 1964. Valeria is inspired by the vampish Morticia, and hulking butler Socket (Bernard Bresslaw) is a Lurch knock-off. But adding to the Hammer resonance, Bresslaw almost got the part of Frankenstein’s monster in The Curse of Frankenstein, only he wanted two pounds a day more than Christopher Lee. It’s also worth noting that regular Carry On director of photography Alan Hume had experience in the horror genre, having worked in that role for Hammer on Kiss of the Vampire, as well as Amicus’s Dr Terror’s House of Horrors. 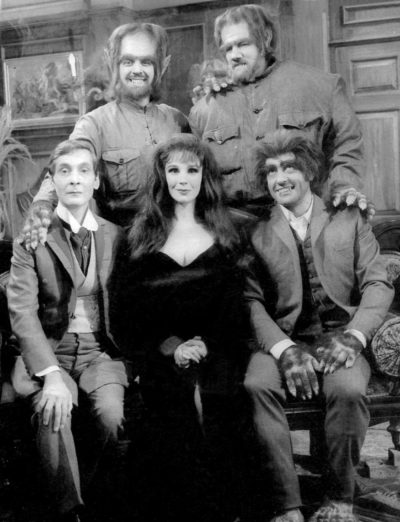 Screaming is missing Carry On stalwart Sid James, who would have played Detective Sergeant Bung. His absence is for the most British reason imaginable: when the film was shot in January and February of 1966, James was appearing in panto. Specifically, Babes in the Wood at the London Palladium. A remarkable hit, it played until June, well past the usual festive season run for pantomimes. Mind you, with lyrics and score written by The Shadows, it was star-studded, the cast also including Arthur Askey, Kenneth Connor, Roy Kinnear and, among the child singers, both Elaine Paige and the future Mrs. Ozzy Osborne.

Williams and Fielding are the most memorable characters here, and largely save this: their sibling relationship was initially intended to be father-daughter, despite Williams being just a year older. Both of them go at the material with the necessary gusto – not that it may always deserve it. Still, Valeria’s delivery of “Do you mind if I smoke?” and the subsequent payoff is unforgettable, though to be honest, it makes absolutely no sense in the context of… Well, I can’t think of a context where it would make sense, to be honest. Even by the standards of the franchise, this is a joke that stands out for its almost zen-like stupidity. Though hell, I laughed.

This film does remain rather uneven, and that was often the Carry On peril. I actually like Corbett, in his only appearance for the franchise. He was responsible for my biggest laugh, after his wife (Joan Sims) complains he never takes her anywhere:
– “Oh, don’t exaggerate. We went out a couple of months ago. We had a lovely time.”
– “You call that lovely? To my poor, dear mother’s funeral?”
– “Well, I enjoyed it!”
It’s a classic sixties exchange, Corbett and Sims hitting their verbal marks with impeccable timing. But the rest of the characters on that side are largely forgettable. I find a little Peter Butterworth in drag goes a very long way.

Horror-comedy is always a tricky thing to pull off, because of the need to balance two genres which pull in almost opposite directions. You would expect this to skew almost entirely towards the comedy; yet I have to say, the horrific elements are certainly not negligible – even if, as you’d expect, largely played for amusement. Oddbodd is a genuinely creepy creature, like a hairy version of Frankenstein’s monster, and capable of regenerating from a single finger. Though they appear to have missed a trick, by not having Oddbodd Jr. be a “Mini-me” sized version: he’s a normal human (as can be seen on the right), only slightly smaller than his ‘parent’. 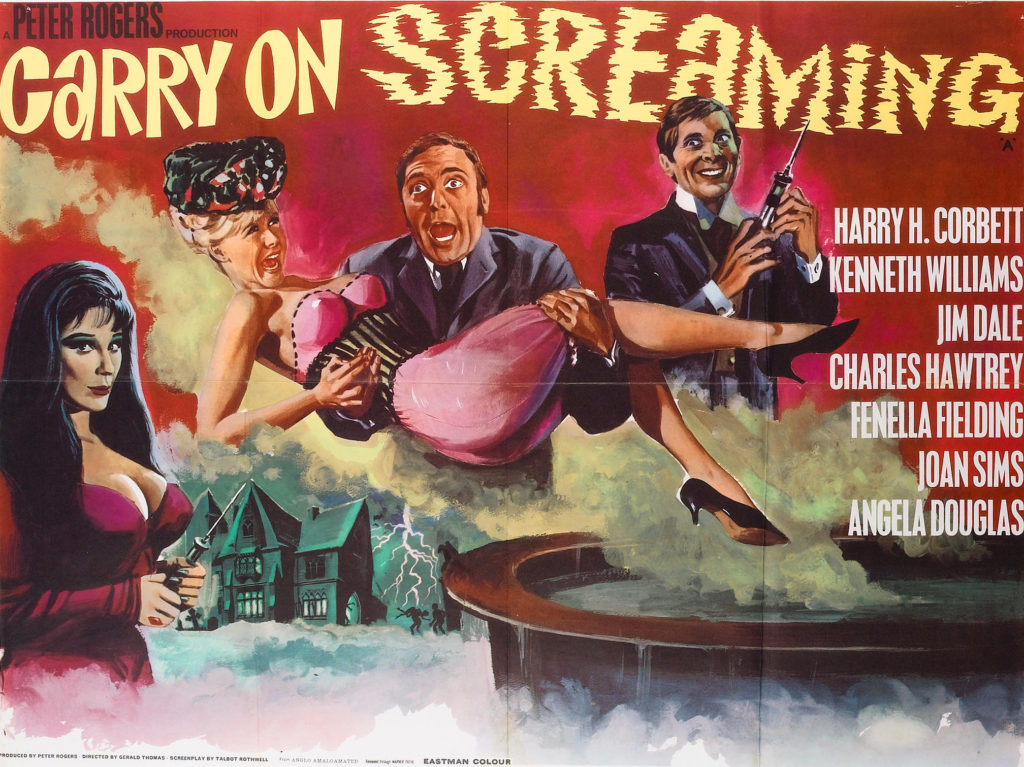 Add in the transformation of women into mannequins, House of Wax style, and you’ve got something which might conceivably merit a remake as straight horror. The ending especially, in which the villain falls into his own liquid, is right in line with House on Haunted Hill. There’s no denying that Talbot Rothwell’s screenplay has no interest in making fun of the genre, instead opting mostly to use the parade of oddball (or Oddbodd) characters to generate its humour. As parodies go, this is gentle stuff, even if it’s rarely less than the least subtle of comedies.

[March 2007 review] This was another one remembered fondly from my youth: the monstrous Oddbodd and the sultry Fenella Fielding both disturbed me…in different ways. Now, neither have much power, and the whole film comes over as nowhere near as good as I remember it. Corbett, as Sergeant Bung, is clearly filling in for Sid James, and though he has his moments, the gulf remains clear. He is investigating a string of missing women, eventually tracing them to Dr. Watt (Williams) and his sister (Fielding), whose bizarre scientific experiments are funded by their sale of tailor’s dummies made from the vanished women. Most of the regulars are present too: Joan Sims as Bung’s shrewish wife, Bernard Bresslaw playing the Watt’s butler and Charles Hawtrey as Dan Dan the Lavatory Man, as well as future Dr. Who, Jon Pertwee.

The target is clearly the Hammer horror style, and it does a decent job of capturing that. But the script is actually not that well-written, relying heavily on some groan-inducing puns, and a shameless theft from Abbott and Costello’s Who’s on First? routine. Truth be told, it took me three attempts to get through this: I simply fell asleep in the middle, and that’s where the main weakness of the movie lies. Once it establishes the premise and characters, there’s nowhere much to go, and the film marks time, grinding almost painfully and generally unamusingly, for the next hour, until a decent finale. Once again, not as good as I remembered it, at all. C