Hammer returned to the world of the vampire, for the first time since Brides of Dracula, three years previously. However, they did so without the pillars of that genre, Christopher Lee and Peter Cushing. And the version of vampirism seen here is definitely a bit different from the traditional style. Daylight, for example, is no longer the lethal countermeasure it has been: a parasol provides adequate protection. I can’t say all the changes work. The ending, in particular, feels problematic. Yet it deserves credit for trying something different, and first-time Hammer director Sharp (who had never even seen a horror movie before coming on board) delivers a very nice-looking picture.

It certainly has one of the most memorable pre-credit sequences in Hammer history. A funeral is interrupted by the arrival of Professor Zimmer (Evans), sporting a top-hat which rarely leaves his head the rest of the film. [He looks a bit like Coffin Joe, who’d make his cinematic debut in Brazil the following year] Zimmer drizzles holy water on the coffin, then takes a shovel from one of the grave-diggers, and plunges it through the casket’s lid, to the outrage of the attendees. But they’re even more shocked by the shriek which emerges from the coffin’s undead occupant. It was so damn cool, I think I’m going to start showing up at funerals and driving spades into the deceased, in the hopes of such a glorious “Told you so” moment. I foresee restraining orders in my future. 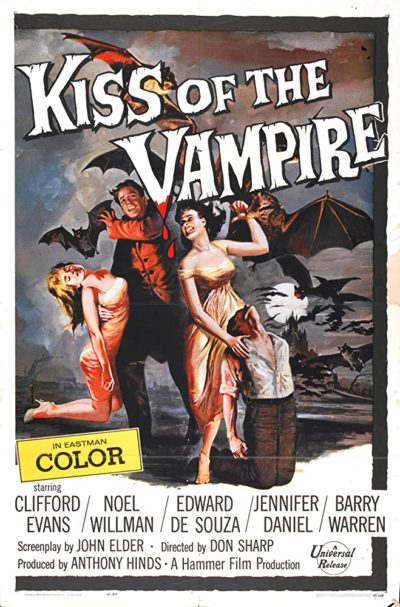 The focus then shifts to honeymooning couple Gerald (de Souza) and Marianne Harcourt (Daniel), who are driving through the countryside in a vintage automobile which appears to date this at about 1910. Poor navigational skills (hers) and a failure to check the petrol tank (his) lead to them being stranded in the middle of nowhere. They hole up at the “Grand Hotel”, which isn’t, but get an invite to dinner from the local neo-nobility, in the shape of Dr. Ravna (Evans) and his family. While initially charming, it becomes clear he has designs on Marianne, and abducts her during a subsequent party. Fortunately for Gerald, Prof. Zimmer has also arrived at the inn, enlightens the unhappy spouse as to what’s going on, and plans a rescue mission.

Right from the get-go, it’s clear there is something “off” about the Doctor and his clan. If it’s a family, it feels closer to Manson than the Cleavers, with Ravna in the role of cult leader. Indeed, it turns out to be rather larger in scale, with the guests at the party all also members. There’s also a personal element at play for Zimmer, whose daughter was seduced to the dark side and irretrievably corrupted by Dr. Ravna. Indeed, throughout, there seems to be an attempt to link vampirism with general decadence, particularly among the upper-classes. There’s no apparent room for blue-collar vampires in this rendition of the myth, and accepting Jesus as your personal saviour is, apparently, a credible cure. Really? I’m sticking with the spade-shaped solution from the beginning of the movie.

While this is not the first one which I had reviewed before, it is the first such to merit a significant re-grade. Back in July 2010, it scored only a D+, as my original review said Evans was “incapable of selling the basic concept” while Willman “lacks the screen presence and feral intensity of Christopher Lee”, and the Harcourts were described as  “entirely forgettable.” I concluded, “this is just too well-mannered, with dinner parties and masked balls instead of bodice-ripping and throat-draining.” Ouch. It certainly fared better in my eyes on this occasion, perhaps aided by my appreciation of the lush cinematography.

I did agree with my decade-ago self about the opening (as well as the similarity to Coffin Joe). And we both enjoyed the sequence after Marianne’s abduction, where everyone gaslights Gerald, telling him he arrived alone, and there never was a wife. But probably where we sync most, is the utter wretchedness of the ending. As we noted previously, this had been written for Brides of Dracula, but Peter Cushing wasn’t having any of its black magic bullshit for his Van Helsing. And having seen the version executed here, I’m with Peter. [Spoiler sentence] Prof. Zimmer uses an incantation to raise a storm of bats which besiege the castle, and gnaw the faces off the vampires. The end. 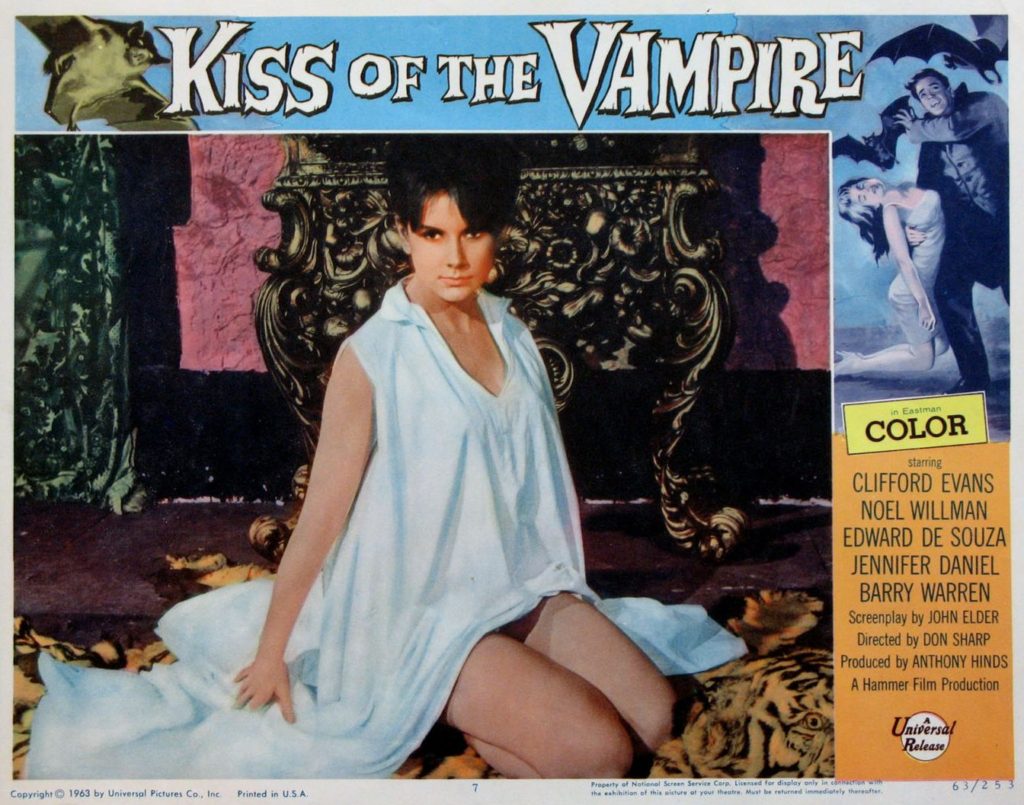 Really? Really? This gets pulled out of nowhere – we’ve been given no reason to think Zimmer is a practitioner of the dark arts, which makes his whipping out of the old spell-book, as per my previous review, “a massive chiroptera ex machina.” He could have done so at any time, too – it’s not as if he needs Gerald’s help or whatever. I could have forgiven this, if the execution had been in any way decent. It isn’t, being the same old “rubbery bats on strings” which we’ve been suffering through since the days of Bela Lugosi. That, and the ending’s sheer abruptness – even by Hammer standards – leave the viewer with a very poor taste in the mouth, and I can see why Jim v.2010 was not impressed.

That said, I did enjoy some aspects more than previously. I liked Evans in his role as an alternate, darker take on Van Helsing, and I think this aspect has aged surprisingly well. A dark vampire hunter for dark times, perhaps. The concept of a family of vampires, or even an entire society of them, is also something largely unexplored by Hammer (and, admittedly, it’s not an area into which Kiss delves with any depth). I do still wonder what the results would have been like with Lee and Cushing involved. The former, in particular, would seem a great fit for the urbane and sophisticated blood-sucker we see wining and dining his intended victims – see Lee in Jess Franco’s Count Dracula for that approach. As is, I now find this a more than decent place-holder until the return of our iconic duo.