I hope you know your 17th-century English history. Because if you don’t, do not expect this film to explain itself. Let me step in and fill the gap. This takes place during the English Civil War, fought between two groups, popularly known as the Cavaliers and the Roundheads. The former were Royalists, supporters of King Charles I; the latter were Parliamentarians, led by Oliver Cromwell. By the time this movie takes place in 1648, they had already been fighting for six years, and the king was on the run, hotly pursued by his enemies. There. That wasn’t so hard, was it? The film doesn’t bother, simply going with a caption: “1648. This is the story of a band of freemen who defied a tyrant.”

In case you were wondering, the good guys are the Royalists, and the villains are the Parliamentarians, which is… interesting. I mean, you could certainly make the case if anyone was a “tyrant”, it would be the absolute monarch. But such things are rather beyond the scope of this, which appears to be a simplistic action romp, aimed at an audience which, apparently, already knew enough about the setting not to need it explained any further. Quite how that would have played to an American audience – presumably completely ignorant of the history – escapes me. I note they were also apparently unfamiliar enough with the word “scarlet”, to require a change of title to “crimson” in the United States. 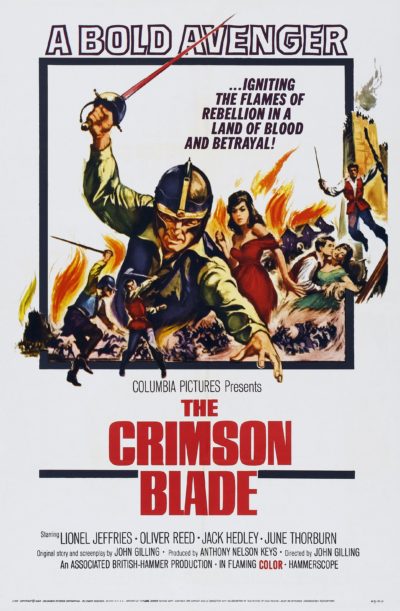 But to get back to the film, it centers on the titular rebel, Edward Beverley (Hedley), who is staging a daring series of raids and attacks on the Roundhead forces, as they hunt and eventually capture King Charles. A particular target is Colonel Judd (Jeffries), head of the Parliamentarian forces in the area, and his second-in-command, Captain Tom Sylvester (Reed). Unknown to the Colonel, his daughter, Claire (Thorburn) is secretly on the side of the monarchists and the Scarlet Blade. As, indeed, is Capt. Sylvester – though the question of how much this is driven by his desire for Claire is a significant issue. By the time this ends, there’ll have been family schisms, betrayal, captures, escapes and battles both large- and small-scale. Well, maybe not large. Middling, perhaps.

The main problem is Hadley, who is as far as possible from the Errol Flynn type you would expect to find. Over his career, he was much more of a world-weary supporting actor type – Hadley may be best known as the burned-out detective at the center of Lucio Fulci’s notorious giallo film, The New York Ripper. Certainly, the attraction Claire feels for Edwards seems inexplicable, and the rest of the Royalists are generally a forgettable bunch as well. A possible exception might be Hammer stalwart Michael Ripper, playing a gypsy, even if the most memorable thing might be his make-up, which brushes questionable close to being brownface. I must give Hadley credit though, for the best bit of action in the film, a robust brawl with a Roundhead soldier around the kitchen of a farmhouse.

Considerably more interesting are the bad guys. Let’s start with Col. Judd, and Jeffries is a revelation as a ruthless bad guy. It comes as quite a shock considering the actor is best known for playing the lovable grandfather in Chitty Chitty Bang Bang (even though he was younger than his supposed son, Dick Van Dyke!). I mean, this is the man who directed arguably the most warm-hearted film of all time, The Railway Children. Watching his character here, casually turning his back and drinking sherry while a Royalist sympathizer is strangled to death by a minion, creates quite a fair bit of cognitive dissonance. Caractacus Potts would be appalled! It certainly increased my respect for Jefferies as an actor though. 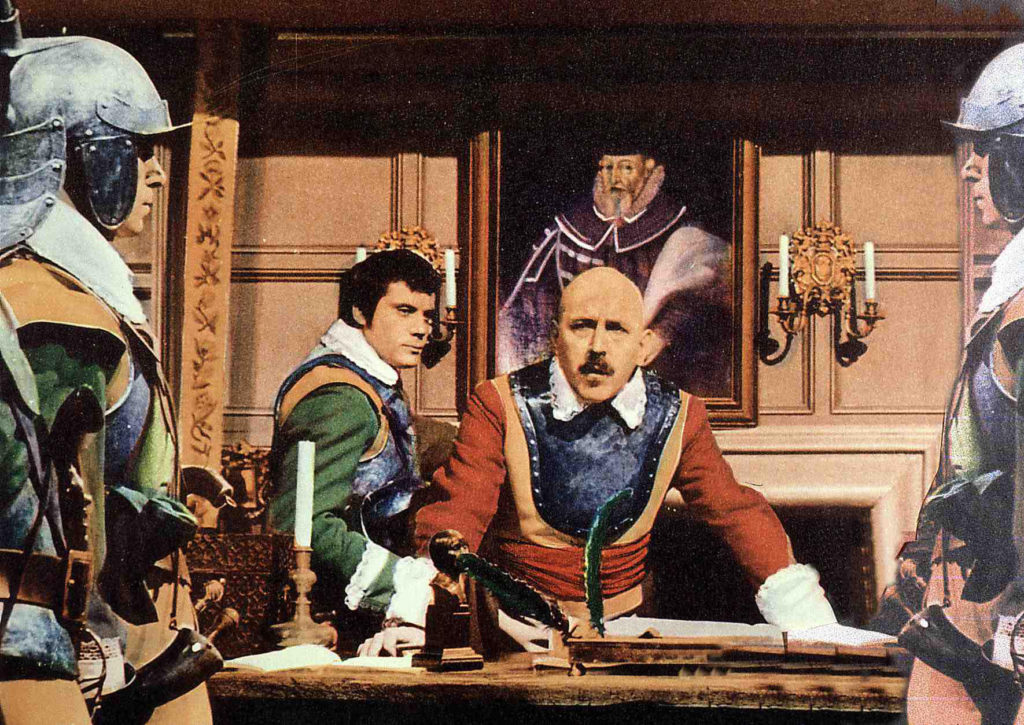 Then there’s Reed; I hadn’t realized quite how many of the Hammer films of this period he was in. I knew about Curse of the Werewolf and Paranoiac, but after the last few movies, even Chris was beginning to wonder if this had turned into an Oliver Reed-themed project, and she just hadn’t got the memo. But it has been interesting to see him develop as an actor over the course of a couple of years. In terms of screen presence, Reed has matured enormously, and this may be the first time where we get a glimpse of the future international star he would become, commanding the viewer’s full attention virtually every time he is on the screen.

It helps that he plays the film’s most fully-developed character, and certainly a good deal more nuanced than the supposed hero. At first, Sylvester appears to be a thorough Parliamentarian – if anything, it seems the Colonel who might be most likely to bend. But his love for Claire pushes him over the boundary, and once that happens, there’s no way back to his original side. His status becomes especially fraught after another Roundhead, Major Bell (Duncan Lamont), is brought in to oversee the hunt for the Scarlet Blade, and becomes increasingly suspicious of the way, for example, Sylvester was conveniently absent when the Blade stages an attack. The film is considerably weaker when the Captain is not around.

In the end though, the film has to stand or fall on the quality of its hero, and the answer tends rather more towards “fall” than we’d like. It is nicely shot, earning cinematographer Jack Asher a BAFTA nomination, and I did appreciate a rather ambivalent ending. Though my desire for some form of historical acknowledgement, would have liked them to have mentioned the way things panned out in reality. Which would be, with the execution of King Charles I, and victory for the Roundheads. Well, at least until the restoration of King Charles II to the throne in 1660. I guess everyone decided absolute monarchy was perhaps for the best, after all…