Proof that mockbusters are not a concept invented by David Michael Latt, this quickie Korean-American co-production is a more or less blatant knock-off of the De Laurentiis King Kong, released the same year. Though the budget here is literally one-thousandth that of its blockbuster brother, reportedly costing a mere $23,000. The saying, “You get what you pay for” would have been a more accurate tag-line here, rather than the legally required one of “Not to be confused with King Kong“.

Any such confusion is unlikely to last very long once the film starts. To the credit of A*P*E [a title chosen as a riff on the similarly Korean-located M*A*S*H – it supposedly stands for Attacking Primate Monster. Yes. About that…], it certainly doesn’t hang about, not bothering with all that dull “journeying to Skull Island and capturing the giant monkey” nonsense. We join this with the beast already on a boat, being shipped to Disneyland.  Needless to say, it doesn’t stay that way. Before you can say, “Wait, why did the poorly crafted model cargo ship just explode into a giant fireball?”, the animal I’m going to call Knog (the film doesn’t bother naming him) is on the loose. Pausing only to wrestle a shark that is either plastic or dead (I’d say it’s a 50/50 bet), he wades towards the Korean mainland, where initially, the authorities are somewhat sceptical about the existence of a 36-foot tall simian. 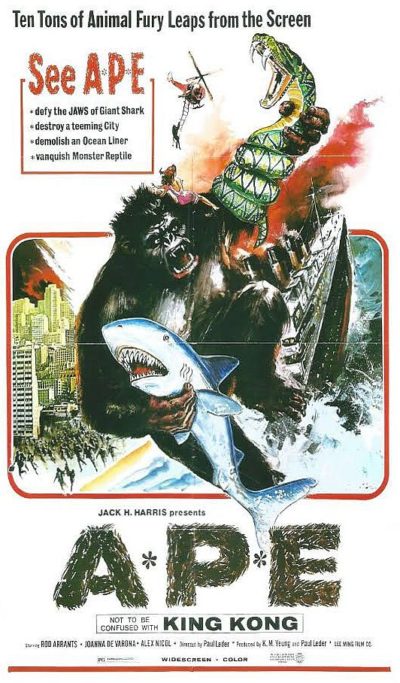 This includes both the Koreans and the American military. Outside of massive volumes of generic stock footage – which we’ll get to later – they are represented by Colonel Davis (Nicol, in his last role – clearly, he decided to go out on a career high) and his sidekick, Lt. Smith. Davis spends almost the entire film on the phone, yelling at people. We still know he’s in the army, less due to his uniform, more because there’s a picture of soldiers on the wall behind him. The main Americans here though, are film actress Marilyn Baker (Kerns), in Korea to make a movie, and her boyfriend Tom Rose (Arrants). If you’re already expecting Baker’s role to consist almost entirely of shrieking at the top of her lungs, congratulations. And, it has to be said, the future star of the Growing Pains sit-com does demonstrate an impressive set of lungs.

But you aren’t here for the screaming Yankee starlet. You’re here for the over-sized ape. Though this one is remarkably light on his hairy feet, even as he leaves footprints the size of a wading pool. “This is Korea, not Scotland!” yells Col. Davis mockingly, on hearing reports of the tracks. As a Scot, I was ready to be insulted, until he followed up with, “The Loch Ness Monster couldn’t make it over the Berlin Wall.” I guess this was a poorly considered Nessie reference – because as every Scotsman knows, she has flippers, not feet… Anyway, what’s impressive is the way the entire Korean population is largely oblivious to the three-storey gorilla in their midst.

This first stands out at Familyland, surely the world’s crappies theme-park. Yet this doesn’t stop a mob of rampaging kids from literally storming the gates and breaking in, to play on equipment which looks as if it was donated by a council estate in South London. Though their approach to going down a slide, suggest unfamiliarity with the concept. More remarkable still, and creepy, is the way Knog just hangs around, staring at them, like Rolf Harris on day release. And frankly implausible is the way no-one notices the ape that is, oh, blocking out the fucking sun, until one small child turns and points. Later on, a fleeing crowd of Seoul residents are oblivious to his presence, until they turn a corner and almost run into his giant legs. Similarly, Marilyn basically runs right into his giant hairy mitt, when she’s fleeing from a rape attempt. It’s OK: it’s a cinematic rape attempt, part of the film she’s making.

We go from rape attempt to ape attempt – I must, reluctantly, discuss the special effects. The miniature buildings through which Knog stomps, reportedly cost twelve hundred bucks. I have to say, they’re actually not bad for the price. If only they’d diverted a little of the resources to the gorilla suit. For it is truly terrible, like a moth-eaten ex-rental they found behind a Halloween store on November 1st. The giant hand with which Marilyn interacts is no better, and indeed, all interaction between Knog and anything else is painfully inept. However, it does give us the glorious moment, pictured top or in GIF format here, where he swats a helicopter from the sky, then gives a rude gesture, copied (or, dare I say it, aped?) two years later by Clyde the orang-utang in Every Which Way But Loose.

The film is actually good fun whenever Knog is on screen, and some of the stuff around the edges is endearingly daft. There’s the sequence where he stumbles across a kung-fu movie set, for example. Though in story terms, this provides little, except yet another opportunity for things to come hurtling directly towards the camera – this was originally shot in 3D. Or there’s the equally irrelevant bit where he “plays” with a passing hang-glider and its pilot. Like everyone else in the film, the aviator appears to have not noticed the stealth simian occupying his flight-path.

You do have to admire Knog’s persistence. After Marilyn is rescued for the first time, and taken to Seoul by Tom, her monkey man follows, and begins ripping buildings apart there, looking for her. Fortunately, he only needs about five minutes to track her down. For rather than obeying the previously mentioned instructions about moving to the south without her valuables, she is aiding with a crap puppet show, the highlight of which is it “eating a cookie“. This must have lost something in the translation, because the kids watching it as far more amused by it, than they should be, laughing hysterically at its wooden antics. The Lonely Goatherd this is not, but everyone is still engrossed, to the point they fail to notice the gorilla-powered destruction going on just down the street, and so Marilyn gets ape-napped once again.

It’s a shame the film then grinds to a halt. The film’s opening credits end with a statement thanking the US Army for their cooperation, and boy, do the makers get their money’s worth, with sequences of helicopters, tanks and soldiers on manoeuvres. This eventually – and it takes far longer to get there than it should – leads to the final confrontation, where we discover that conventional weapons can work against a monster, if liberally applied. In particular, if liberally applied directly towards the camera, for reasons explained earlier. It’s surprisingly bloody, too. After Knog goes down, Colonel Davis crows, “Let’s see him dance for his organ grinder now!”, which is hardly a worthy follow-up to “It was beauty that killed the beast…”

In the final analysis though, while both this and the De Laurentiis King Kong failed dismally at the box-office, I would have to give the nod to A*P*E. Not only was it considerably cheaper – if you’re going to lose money, better it be 23 thousand than 23 million – it’s also considerably more entertaining in the overall scheme of things. Admittedly, save for Knog flipping the military the bird, there’s probably not much more amusement to be gained from watching the entire feature over the trailer. Which is below. You’re welcome.