This is the kind of film it’s difficult to write about, because it pivots on a very major twist, about half-way through. I don’t want to spoil it, since it is responsible for much of the movie’s impact. But this is, arguably, also its biggest flaw. So apologies if what follows is, of necessity, a tad vague: let’s just say, the title is not inaccurate. A decade ago, three little girls escaped from an abuser, Larry (Wakeling), who had kidnapped and subjected them to an extended period of torment. Now, they are kinda rebuilding their lives, though with limited success: Norma (Jones) just got fired from her job; JJ (Cloutier, top) is struggling with her classes as she tries to become a doctor; and Sasha (Chitwood) is an out-call stripper with a drinking problem. 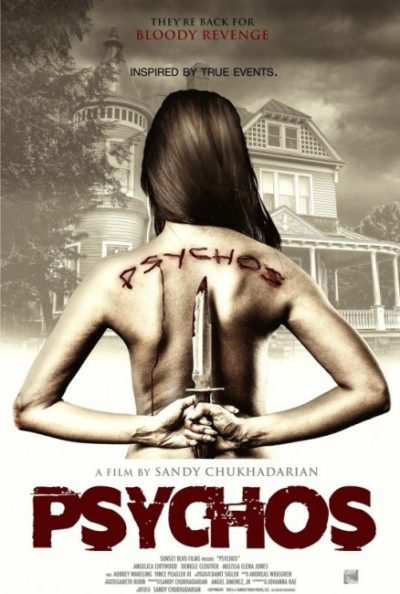 The past they want to forget rears its ugly head, when they each receive video footage of their abuse, sent by Larry to torment them. The women decide to team up, and visit Larry, to teach him a lesson and recover the material so it can’t be used again. Which is roughly where the twist occurs; I suspect whether you buy into it or not, will largely determine your opinion of the movie. You certainly can’t say Chukhadarian plays it safe: this is very much a “go big or go home” decision. But, for me, it just didn’t work. It made much of what had happened to that point completely implausible, destroying any internal consistency.

Once a film has betrayed my trust, and basically been found to be deliberately lying to me like that, it’s very hard for me to regain any level of confidence in it. I largely found myself taken out of the narrative, and doubting everything which unfolded from then on. After all, fool me once… This disengagement freed me up to notice some of the other plot-holes. These mostly revolved around Larry. What was his motivation to send the footage after all this time? The twist does offer an explanation for certain aspects, like why he didn’t do anything after they escaped (such as fleeing, the sensible move), and the ease with which the trio track him down. Yet it all required specific contrivance, and after having lost investment in the movie, it wasn’t an effort I could find myself making.

It is a twist other films – some rather more famous – have used, without it proving so off-putting to me. I’m not certain why it derailed things so completely here. The performances are sound enough, with Cloutier probably coming off best. She occasionally achieves echoes of Margot Robbie, which is never a bad thing. I suspect I might have felt differently had the revelation been left until the very end of the movie. Instead, it seemed I was the victim of a bait-and-switch, with the script yanking the carpet out from under the viewer, before it had delivered enough to justify the action.