Ah, so that’s what Anthony Perkins’s son is doing these days… I had been aware of the name, and the critical buzz around his earlier neo-horror films, like The Blackcoat’s Daughter. But this was the first I’d seen. And, on the results here, I won’t be in a rush to back-fill the gaps. For while this certainly looks very nice,  there wasn’t enough meat on its bones for my tastes. As the flipped title suggests, it’s an adaptation of the Grimm Brothers’ fairy-tale, with the focus mostly on the daughter, Gretel (Lillis). Much of the rest unfolds as we all know: siblings Hansel (Leakey) and Gretel are wandering through the forest, and find a house, filled with delectable treats that appeal to the hungry children. But its owner is an old woman, Holda (Krige, looking curiously plastic-y), with mysterious powers and an unpleasant agenda towards young children who are lured into her lair. 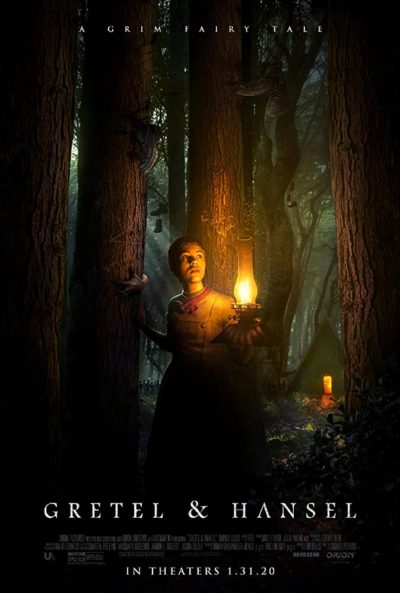 The difference is mostly in the relationship between Gretel and the witch: rather than being purely antagonists, they have considerably more in common here. Even though Gretel is highly suspicious of their host, she hangs around, because Holda is training her in the dark arts. Never mind the disturbing visions and experiences which Gretel is having. Most notable is the particularly lurid one where a younger version of the witch turns a bucket of dismembered children’s body parts into the food she and her brother have been scoffing. That’d get me making my excuses and heading for the exit, personally. And that’s before Holda starts pulling a little girl’s pig-tail from her mouth (top). Is that the time?

The other main change is the provision of a backstory, telling the story of a previous child of mysterious powers, who was abandoned deep in the woods by her fearful family. But there is also the addition of a hunter character (Babaloloa), who saves the children from a ghoul. Quite what the hunter’s purpose is, escapes me. I kept expecting him to return to the story, yet he never does. There’s also the odd sequence where the kids eat psychedelic mushrooms and laugh hysterically for a bit. Not sure what that was about. My main issue, however, was the way the story ground to a halt after the children arrived at Holda’s house. There’s a lot of Gretel and Holda sitting around, and way too much ominous dread.

I will say, there’s no shortage of striking imagery, with Perkins having a really good eye for visual style. I sense this is the kind of movie on which doctoral thesises will be written in future decades, analyzing the hidden meanings. They could perhaps do the same with the dialogue, which appears deliberately artificial, with Lillis reciting her lines in a stagey manner. If you’re happy with something which relies almost entirely on atmosphere, this may be a worthwhile excursion. Personally, I had hoped there was going to be more horrific substance, and came away disappointed on that score.