I hadn’t seen this before and was salivating at the prospect of seeing Price and Lee share the screen. The sixties saw both men at their peak, achieving iconic status in the horror genre. Price starred in Roger Corman’s Poe cycle, among others, while Lee was just as renowned for his work with Hammer. Teaming them up could have been awesome. Instead, it’s only… okay. Perhaps it might have been better under the intended director, Michael Reeves, who had goaded an incandescent performance out of Price in The Witchfinder General the previous year. However, Reeves fell ill (he’d die of an overdose in February 1969) and was replaced by Hessler at very short notice, with only two days to prepare. Indeed, writer Lawrence Huntington also died eleven days into production.

Even by the loose standards of AIP’s Edgar Allan Poe adaptations, there’s precious little to connect the movie to the Poe story of the same name. Coffins – the oblong boxes – play an important part in both, and that’s about it. However, the film does explore a number of Poe-esque themes, including premature burial, masks, and karmic retribution for misdeeds. The original version of the story had Price playing twin brothers, but that aspect was abandoned, with Williamson now in the role of Sir Edward Markham. He has been disfigured by an African tribe, as a result of an incident there, and is now kept locked up in the attic of the family mansion, by his brother, Julian (Price). However, he’s had enough of confinement, and hatches a plan to fake his own death and escape. 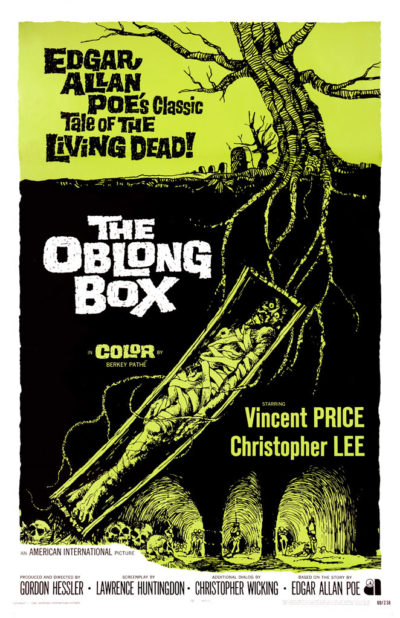 It works… kinda. He ends up buried alive, and by the time he’s dug out, his sanity – already pretty fragile – has been blown to pieces. He takes refuge with Doctor Newhartt (Lee), the body-snatching doctor who exhumed Sir Edward’s body, and is rather surprised when the supposed corpse tries to strangle him. But it’s not long before the corpses start to mount up: a co-conspirator who betrayed him here; a bit of EuroTotty there (who being European, and therefore loose by definition, unsurprisingly provides the movie with a bit of nippleness). Sir Edward discovers the truth about what happened to him in Africa, specifically that Julian was actually the culprit. The man in the crimson mask – not exactly a great way for any fugitive to stay under the radar – is rather unhappy about it.

This was the first of three features in which both Price and Lee appeared. The following year, they would re-team under Hessler for Scream and Scream Again, then in 1983 would appear together, along with Peter Cushing and John Carradine, in House of the Long Shadows. However, here, they only get one scene together, and Dr. Newhartt is on the edge of death when it happens. I wish there had been more: it’s not exactly the clash of the horror titans I was wanting to see. But it does feel closer to a Hammer film than an AIP one: some faces you should recognize, such as Rupert Davies out of Dracula Has Risen From the Grave; Williamson himself had bit parts in a couple of Hammer films too. Their regular musical supervisor Philip Martell also worked on the score.

It’s quite a surprise to find that Price is probably not the main character here. Especially in the middle, the film focuses mostly on Sir Edward, and that feels like a significant misstep. We’ve never been given good reason to sympathize with him, from a somewhat confusing opening whose main takeaway is likely the formal outfit Philip wears to attend voodoo rituals in darkest Africa. By the point we encounter Sir Philip, he’s a dangerous creature, kept locked up. It’s not initially clear whether that’s for his protection or that of society; however, his enthusiastic attempt to choke the family lawyer who visits him suggest we’re not exactly talking The Elephant Man here, a gentle soul trapped in a monstrous body. Even if Sir Edward ends up being an innocent party in the original incident, he is still a multiple murderer by the film’s end. 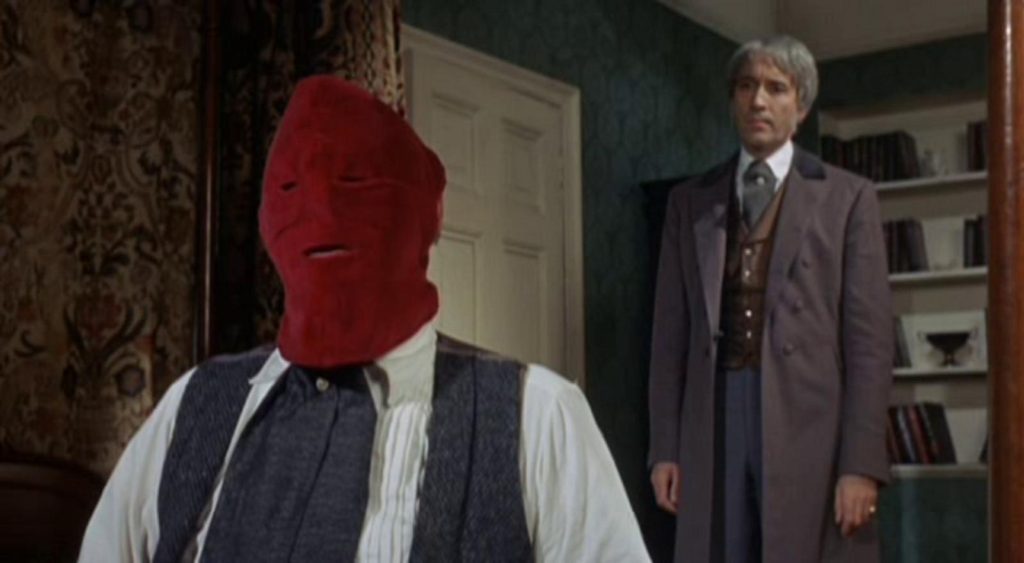 I must also say, in regard to the film’s effects: these are likely the worst throat-slittings I’ve seen. They consist entirely of an odd colour of red being smeared from the straight razor, across the victim’s skin, with no penetration or sense of any subsequent flow at all. What’s worse, the film keeps doing it, not apparently realizing that there are times were showing something badly can be worse than not showing it at all. It’s such a horribly bad effect, I was literally taken out of the movie every time it happened. If you can’t depict a convincing razor slash… maybe don’t make a razor your antagonist’s main weapon? Just a thought. And when we finally see what has been hidden behind the mask, it’s pretty underwhelming. It feels like it could be cured right up with a dose of that medicine Cindy Lauper touts for plaque psoriasis.

However, there are still positives, most clearly in the film’s look, which is atmospheric and rich – up there with the top-tier of Hammer. And you can’t exactly go wrong with Price and Lee, even if their stories feel like two different movies. The latter’s could have been a interesting, twisted take on The Doctor and the Devils, and it was interesting to see Lee as a physician, something he previously played in The Man Who Could Cheat Death. But the film’s grade is likely capped by an underwhelming performance from Williamson, who doesn’t have the presence necessary to establish the character. He probably isn’t helped by his voice being dubbed by another actor – though that the makers deemed that necessary, maybe tells you everything you need to know. This feels like a lost opportunity: with a different lead and, perhaps, Reeves instead of a journeyman like Hessler, you wonder what it could have become.