Welcome to the seventies. And there could hardly be a more savage change in tone to mark the turn of the calendar to a new decade, than the contrast between this and the selection for 1969, The Oblong Box. We go from the urbane, cultured Vincent Price, trying to deal with a terrible family secret, to a drag queen getting religious paraphernalia inserted into places unapproved by His Holiness the Pope. The “horror” category on the IMDb clearly covers a broad range. Maniacs is also classified there as “comedy” and “crime,” which I think are somewhat better fits. Though this is the kind of movie which seems deliberately crafted to defy categorization. A feature length episode of Jerry Springer might be the most accurate way to describe it.

Seeing this pop up as the IMDb’s best choice for 1970, however, makes me want to call in some kind of wellness check on them. In certain ways, it’s barely a movie, featuring some of the most terrible camerawork ever. I understand this was Waters’s first “talkie”, but there are many occasions when he has no clue where to point the (apparently single) camera. Then there’s an apparent one-take approach, dialogue which largely seems improvised with no advance warning, performances that can charitably be called “mixed”, and a poverty-row budget of $5K. Regardless of the director’s subsequent work, I reckon this is something which should be buried as the daubings of a kindergartener, not given a release by the Criterion collection. 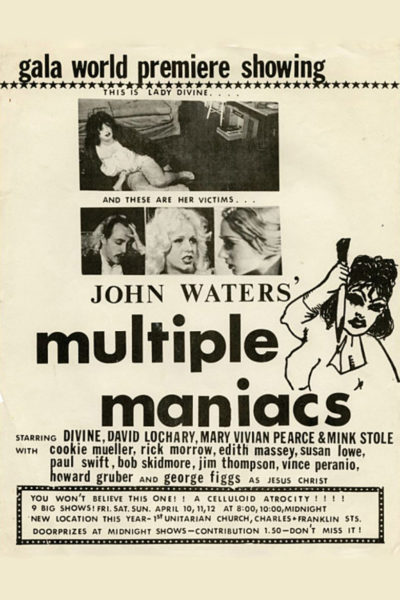 It opens with a performance by the travelling freak-show known as the Carnival of Perversion, which lures normals in by promising to show them every depravity under the sun. It’s kinda interesting, because it feels like this was basically Waters’s manifesto in his early years – particularly for Pink Flamingos, made two years later with many of the same cast. Mind you, society has changed a bit over the fifty years since. One of the “shocking” elements touted by show barker Mr. David (Lochary) is, “You’ll see two actual queers kissing each other like lovers, on the lips.” Now, that’s every other show on the CW. We’ll save discussion of whether or not it’s an improvement to society, for another day.

David is in a bizarre, dysfunctional relationship with carnival queen Lady Divine (Divine, natch). She has convinced David he was responsible for the Tate-LaBianca killings, which took place just a couple of months earlier. Tasteless? Probably. But as such, right up Waters’s back passage. At the time shooting started, Charles Manson had yet to be linked to the murders, and a newspaper announcing his arrest ends up in the film. Anyway, David hooks up with blonde wannabe member of the carnival, Bonnie (Pearce), while Divine encounters Mink Stole (Stole) in a church. This leads to probably the second-most notorious scene in the movie, where Divine gets fucked in the ass with Mink’s rosary, while she recites the station of the cross.

To say this goes on far longer than necessary, would be wrong. Because that would imply it was ever necessary to begin with. Given that, however, it certainly goes on far longer than any possible purpose could be served. This is probably the film’s biggest flaw: Waters doesn’t know when to stop, and I lost count of the scenes which droned on and on and on. This weakens proceedings, because the last thing which transgressive cinema needs to be, is boring. You want to shock people? That’s done by with an artistic punch to the face, rather than repeatedly poking them on the shoulder: that just irritates them.

David and Bonnie decide it’s time to murder Divine, after discovering the truth about the Tate-LaBianca murders. Meanwhile, Divine and Mink have similarly homicidal intent, after hearing about David’s infidelity. All four of these weirdos, end up at the apartment belonging to Divine’s daughter, who is hanging out there with her boyfriend. Bonnie ends up shooting the daughter, with what may be the smallest gun in cinema history, and tie up the boyfriend, just before Divine and Mink show up. Much bitching ensues, which escalates to stabbings, shootings and Divine ripping out David’s internal organs and chowing down on them. Clearly raw cow guts are a culinary gateway drug to dog poo. 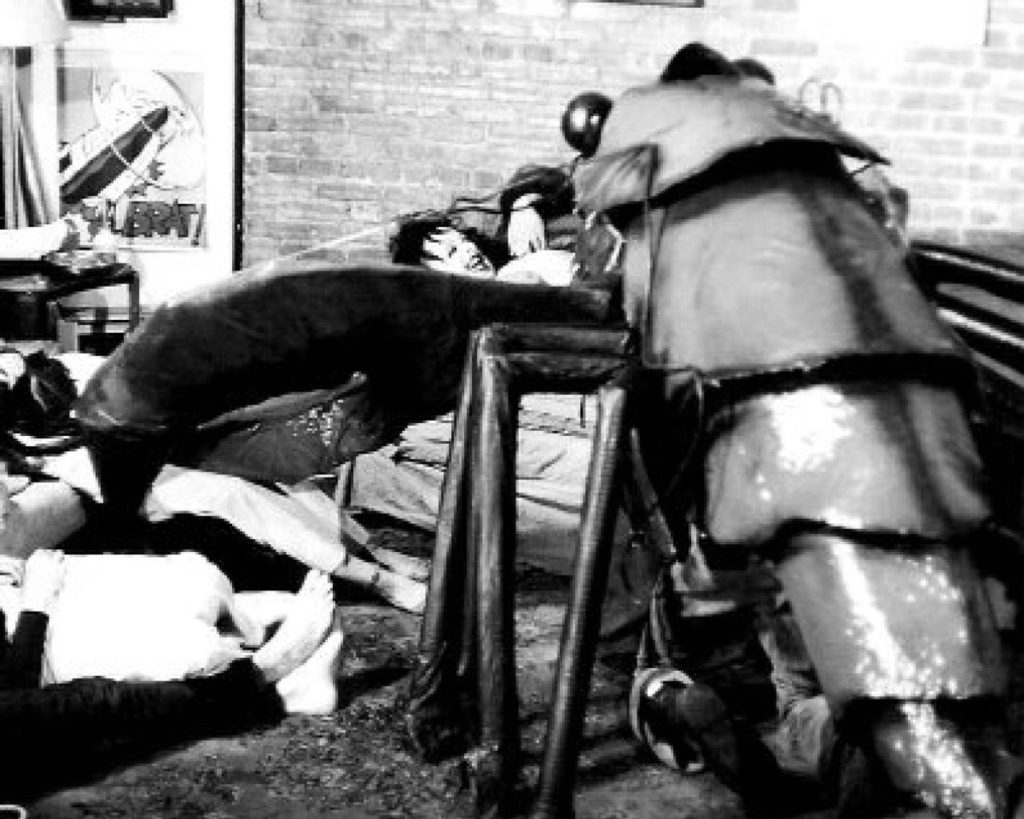 The carnage drives Divine totally over the edge and, in the film’s most notorious sequence, she hallucinates a giant lobster in the apartment, which rapes her. “Ah, so that’s where the five thousand dollar budget went…” mused Chris, and I have to say, it seemed like money very well spent. I mean, while you can see the wires manipulating its claws, this papier-mache monster is still glorious. It then gets a little poignant, with Divine telling herself, “You know no one can hurt you. You know no one can even get near you. You have X-ray eyes now and you can breathe fire. You can stomp out shopping centers with one step of your foot. You can wipe out entire cities with one blast of your fiery breath. You are a monster now.”

Yep, it basically ends with Lady Divine becoming Godzilla, and storming through the centre of Baltimore, a crowd of terrified residents running and screaming in front of her. Yet it turns out those words were false, and she is gunned down in the streets by the National Guard. This is almost spookily prophetic, considering that less than four weeks after Maniacs had its world premiere, the Ohio National Guard shot and killed four students at Kent State. It is kinda sad, because Divine is the only character you care about here, largely due to the actor’s sheer force of personality. Without him, this would have been unwatchable, but there’s raw charisma in buckets, and the subsequent rise of his star is unsurprising. Though I could live without the way 98.3% of drag queens are shameless Divine clones.