“A brass unicorn has been catapulted across a London street and impaled an eminent surgeon. Words fail me, gentlemen.” Immediately afterward, as the police are attempting to remove the creature from the victim, they discuss whether or not its horn has a right-hand screw. This represents a fairly accurate summary of the pleasures to be found in this large slice of faux Gothic comedy-horror. Although not quite consistent enough in the degree of lunatic invention to be a true classic, it has its moments. And, really, who better than Price to play a mad doctor – religion and music, rather than medicine – offing people in accordance with the ten Biblical plagues of Egypt, in order to avenge his dead wife?

There has been quite a lot of Vincent in this series: Phibes is his last entry. I think watching these has given me a bit more appreciation of his talents. I’d previously considered him on a lower tier than, say, Peter Cushing. But I think, in the right role, there’s a very similar ability to take the ludicrous, and give it credibility. It’s particularly impressive here, since his character has been struck dumb, as the result of a fiery car accident which left the world thinking Dr. Phibes (Price) was dead. Speech is delivered through an electromechanical device, which means the physical aspect of the actor’s performance becomes all the more important. Even that is limited, due to the mask he wears over his burned face. The result feels like ancient Greek theatre, with gesture and posture largely taking the place of speech. 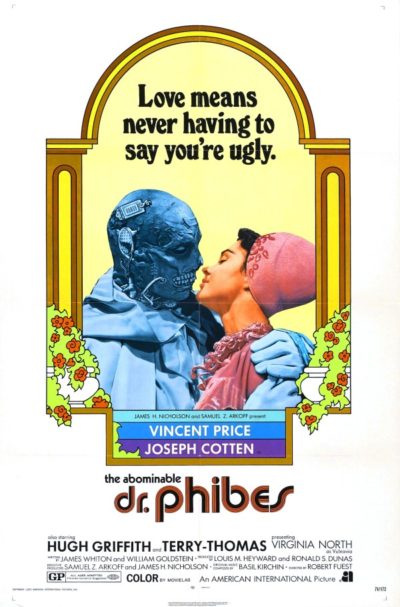 While most of the films of his seen lately have been at least nominally adaptations (particularly of Poe), this was an original story, scripted by the writing team of William Goldstein and James Whiton. It took a while to reach the screen, the original treatment having been written in 1964, before being sold to AIP. Neither of them would write another feature, which is something of a shame, as they do appear to possess a nicely twisted sense of imagination. Fuest began as a set designer, which may help explain the visual flair apparent here. He would have more of a career, including William Shatner vehicle, The Devil’s Rain. But this and its sequel are likely his best known works.

Proceedings begin with a series of murders, the victims all doctors being killed in weird ways, such as by flesh-eating bats. The police are baffled, but Inspector Harry Trout (Jeffrey) eventually figures out the targets had worked on the same patient, Victoria Regina Phibes (the photos of her are Caroline Munro, then largely unknown as an actress). The medics had failed to save her, and her husband supposedly died on the way to her bedside. The man in charge, Dr. Vesalius (Cotten – the part was offered to Cushing, who turned it down due to his wife’s illness), assists Trout in the investigation. However, they are unable to stop Phibes, as the remaining members of the medical team are slain by Phibes and his mute assistant, Vulnavia (North) – who may or may not be a clockwork android. Naturally, Vesalius is being saved for last, as the man deemed most culpable in the death of Mrs. Phibes.

It does play fast and loose with the biblical plagues – the unicorn death mentioned above is, apparently, the one for “livestock”. Yet I think I appreciated it when the Doctor was more inventive, as opposed to just dumping locusts on someone’s face. It also relies on the authorities, and the police in particular, being egregiously dumb, acting in ways which are barely an inconvenience to Phibes’s murderous schemes. They know who are the remaining targets before the half-way point, yet the resulting protective custody is woefully inadequate. And outside of the cars, I never got much sense of period, with a setting which feels like it could have been anytime in the preceding century.

Yet there are still a good number of cool things to appreciate. Really, as Evil Overlords go, Phibes is the master of style, equipping his lair with a giant pipe organ which rises, cinema-like, out of a pit. Then, when he gets bored with fingering the keys, he swans off and starts dancing with Vulnavia, to music played by The Dr. Phibes Clockwork Wizards, a band of automata. As with most of his other “villainous” characters, Price brings a humanity to the role that makes it hard to hate him – despite, or perhaps because of, his lack of vocalization. Although the Phantom of the Opera-esque love story promised by the poster (right) never does show up… 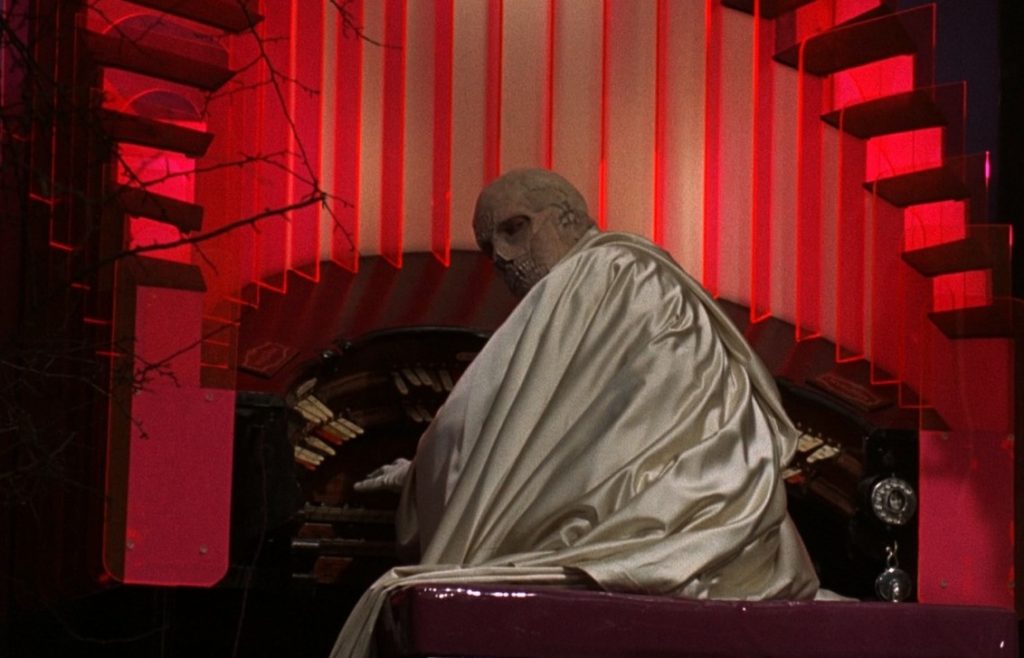 While Price would return for a sequel, Dr. Phibes Rises Again (Cushing would appear, albeit briefly, in that) the following year, further attempts to keep the franchise going proved fruitless. Long-time Price partner Roger Corman floated The Bride of Dr. Phibes in 1976, and other titles proposed included Dr. Phibes in the Holy Land and The Seven Fates of Dr. Phibes. Some involved Price, others replaced him with actors as diverse as David Carradine, Roddy McDowall and Orson Welles. None would come to pass, and that’s probably for the best. Phibes is very much an elegant creature of his time, and would have felt out of place in the harsh daylight which was eighties horror.

Still, the impact and influence on the genre is undeniable. The biggest debt is likely owed by the Saw franchise, which takes Phibes’s elaborate killings of those deemed guilty by the masked, intelligent and completely insane antagonist, then runs amok with the concept. Se7en and its Biblical-themed vengeance is also a clear descendant, as is Sam Raimi’s Darkman with its disfigured anti-hero, disguising themselves to take revenge. You could even, at a stretch, argue that the urbane Hannibal Lecter in Silence of the Lambs takes some inspiration from his fellow doctor. As a finale to the Vincent Price section of this series, it’s fitting we end with one of his most influential works.