This takes place in the aftermath following an outbreak of a mutated and highly infectious version of rabies, which began in Sumatra (no word if sprung from a Rat-Monkey…) and quickly spread across the world. Three months later, anyone still alive who knows what’s good for them, have fled the cities and are seeking sanctuary in the less populated – yet still highly dangerous – rural areas. One such group is under the leadership of Mario (Fernández), and they eventually find sanctuary in a remote village compound, with another set of survivors, led by Jairo (Mayora).

Yet things may not be quite as they seem. One of Mario’s party goes missing, and when a search is mounted, Jairo is shot in the forest by a third group, who apparently have a beef with him. Then there’s the question of the mysterious supply of fresh meat on which they subsist. This lasts even as winter lowers its frozen hand down on the countryside, limiting the ability of the survivors to forage for supplies. Anyone who has seen The Walking Dead will not be shocked by the source there, though I have to say, the actual resolution still managed to be more twisted than I expected. Actually, there is a good deal of TWD influence generally. While these are not technically zombies – someone is verbally slapped down for using the z word – we are dealing with mindless, voracious creatures with little left of their better nature, and a taste for human flesh. 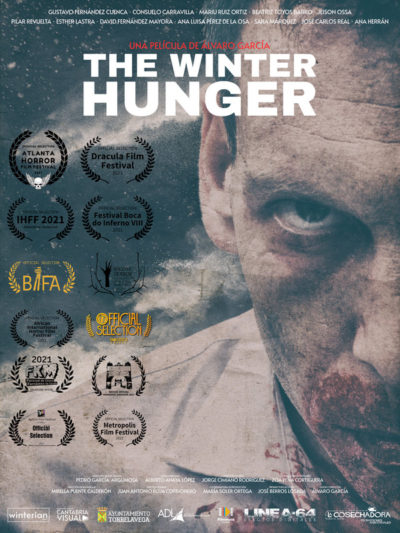 Particularly familiar, is the way it feels that the infected may not be the biggest threat in the long run, compared simply to other people. Now, we quit watching TWD a long time ago: that may actually work in this film’s favour, as there has been a few years of palate cleansing since. If this recycles a lot of familiar ideas, we’re no longer as generally burned out on the genre as we were at that point. It helps that the cinematography is top tier stuff, with a lot of aerial footage that emphasizes just how small and insignificant the people are in this situation. It definitely helps ensure that the moments of impact pack a genuine punch.

The problem for me was, it all felt rather too loosely structured and disjointed.  For instance, it begins with an apparent incident at a school involving Marion, but the details of it remain opaque for the longest time. There are also dreams, flashbacks, and occasional moments where the movie simply seems to get bored and drift away, when what feels like quite pivotal information is about to be revealed. It’s all rather frustrating, because the movie gets so much of the other stuff right, with decent performances and production values that are well above what you typically get in the genre. However, I’m too much a believer in cinema as a medium for telling stories, to be able to overlook the flaws in that department entirely.