This is one of those movies it’s difficult to talk about in detail, because of the way it yanks the carpet out from underneath you in the middle. In effect, it becomes an entirely different film in the second half. This kind of transition is difficult to pull off, yet the director manages it here. He’s helped in this job the initial set-up, which does a good job establishing a world of weirdness, where anything can happen. When the carpet-yanking subsequently does, this makes it a lot easier for the viewer to go with the flow and accept it, as well as the twists that follow over the remainder of the movie. 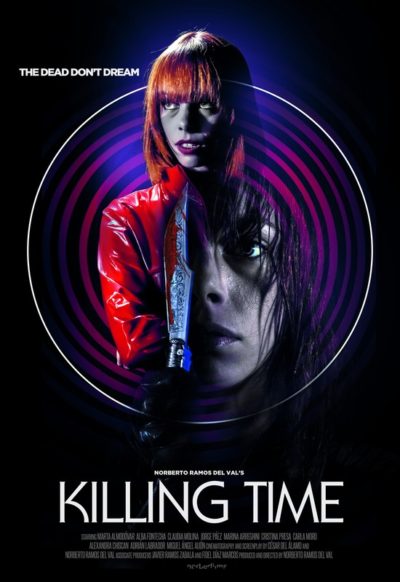 Initially, it’s the story of Sonia (Almodovar), an artist who inherited a house from her aunt, and has moved in, to work on her paintings. Her agent, Laura (Molina), is increasingly concerned about the impact the house, with its troubled history, is having on Sonia’s psyche – and with good reason. For the artist is plagued with strange dreams, increasingly dragging her into a darker place, psychologically, sexually and spiritually. As we learn through a drunken rant to a Tinder date, when she lived there as a young child, the house could make Sonia live other people’s dreams. It’s not a power which has abated with time: “The house is the antenna and I’m the receiver,” she explains.

This leads up to the point where the movie shifts sideways, focusing in the second half on Natalia (Fontecha), a former college friend of Sonia who is now a lawyer. She also becomes worried about Sonia’s mental state, and travels, with her easy-going boyfriend Daniel (Páez), to pay a visit. Their unannounced arrival annoys Laura, setting the stage for the final, bloody resolution, which perhaps goes to prove the truth in the old adage, “The house always wins.” Despite the Spanish origins, this is heavily influenced by Italian giallo movies, though is more gynocentric. While there is no shortage of twisted carnality, dream (or, at least, dreamlike) sequences, and women in peril, it’s also the women who are doing the imperilling, rather than some dude in black gloves.

Initially, the results do seem a bit of a mess, with an uncertainty, albeit entirely deliberate, as to how much of what’s happening is real, was previously real, or is simply a product of Sonia’s slowly disintegrating mind. It’s an approach that is often used as an excuse to cover up sloppy writing (see: Dario Argento’s entire filmography since Opera). That doesn’t appear the case here, although it does occasionally misstep, e.g. Laura suddenly goes from caring about her client to an almost callous disregard as to her existence. However, as mentioned above, a loose approach is likely necessary, to set the stage for the second half. If you hold on for the entire ride – and please keep your arms inside the vehicle at all times – then you should find the eventual payoff to be quite satisfactory.