This has a great premise, even if it arguably doesn’t manage to squeeze all the potential out of it. Sicilian lawyer Giorgio Belmonte (Gattuccio) has been on a downward spiral since the abduction of his son several years ago, by persons unknown. In the wake of that, his marriage broke up, and he became an alcoholic. Waking up one morning after the latest drink-fuelled bender, he finds a gun, one bullet and a Bluetooth earpiece have been left beside him. Turns out the man (Balzarotti) who abducted his son has contacted him, and is willing to give himself over to Giorgio at sunset… providing the lawyer follows the perpetrator’s instructions exactly for the rest of the day. 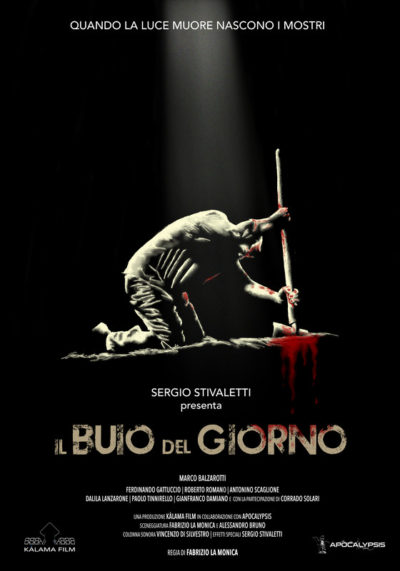 Ok, I was sold, simply on the most basic “What will happen next?” level of story-telling. As Giorgio’s new associate leads him through the city, and out into the woods, it feels like a more expansive version of Saw, with a puppet-master pulling the strings of his victim, for reasons that are simultaneously charitable and extremely cruel. On his trip, Giorgio is faced with a number of moral dilemmas, created by the tormentor, e.g. he’s handed a collaborator in the kidnapping, and has to decide what to do with him (top). You can’t help but wonder what you would do in the same situation. Things gradually become messier and bloodier, turning into a hostage situation, and with a memorable scene involving a large rock and a head. [SFX are by Italian veteran Sergio Stivaletti, who also produced this]

I’d say this is likely at its best when demonstrating the paranoia and inner turmoil through which Giorgio is going. For example, he’s told to go to a cafe and pick up an envelope; it’s clear his every action is being watched, the question is, by which of the patrons? Considering this, like a lot of the film, is Gattuccio speaking to an off-screen entity, it’s surprisingly gripping, though – perhaps inevitably – it does feel quite talky on occasion. While mostly grounded, you also have to accept that his tormentor is utterly all-knowing, in ways which seem to border on the supernatural at points; it’s arguably close to a giallo influence.

Unfortunately, I don’t think La Monica proves quite able to stick the landing. You’d expect the film to end in the long-awaited confrontation… which it both does and doesn’t. There’s an extended coda, which eventually gets to a reasonably satisfactory wrap-up, though you may well have more questions than answers. It’s another feature perhaps carried over from the giallo genre; in my experience of it, endings there are frequently problematic. It’s not sufficient to devalue the entire experience, with enough elements that are above average, or at least solid. However, considering how much I was enthralled by the high-level concept, I confess to being somewhat disappointed that I ended up merely liking this, rather than loving it.