There are FearCon submissions we get where people seem unclear as to the nature of our festival. These are the “Is this a horror movie?” entries – so called after the question we typically ask each other about 30 minutes in, when a film appears to be avoiding our genre entirely. This was on its way there: I don’t think we actually said it, in part because it was still an interesting and well-assembled watch. But we were certainly getting towards the post-code, in part due to a synopsis that undersold itself a bit. By the end though, there could be only one answer to The Question. Fuck, yes. This is a horror movie. 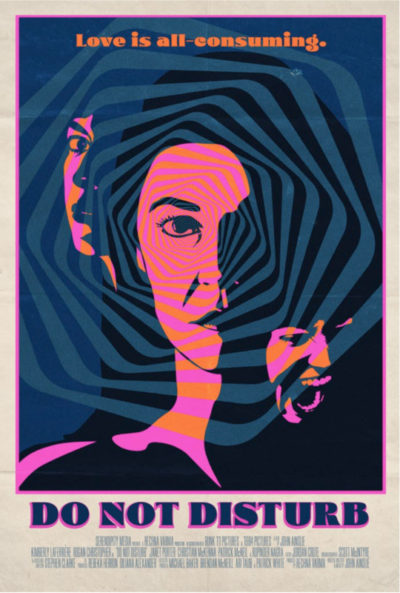 It begins with relatively newly-wed couple, Chloe (Laferriere) and Jack (Christopher) going on a vacation to Miami. There, they meet swinging couple Wayne (McKenna) and Wendy (Porter), and it becomes increasingly clear that Chloe and Jack have Issues – capital letter used quite deliberately. Substance abuse; infidelity; post-miscarriage depression; problems of general trust; inability to communicate honestly. There’s enough material here for a couples’ counsellor conference. It’s not the sort of thing we like to watch, honestly: I’m of the belief that if you don’t genuinely want to be with someone, then get out of the relationship. Watching couples fight is only fun when it’s on The Jerry Springer Show.

Then the mind-altering substances show up. While sunning themselves on the beach, a clearly high individual literally showers them with peyote and other drugs before walking into the sea and vanishing. In one of the worst decisions in the history of poor decisions, Chloe and Jack decide to indulge in this unexpected bounty. What subsequently follows can probably be described as the best anti-drugs commercial since Requiem for a Dream. Because, after initially being all fun and games (Christopher is surprisingly good at slapstick comedy), it eventually unleashes some primeval instincts that… well, let’s just say, leave their hotel room in a state with which housekeeping might have problems. On the plus side, they won’t be spending much on dinner for the rest of their vacation.

I mentioned Jerry Springer above, and there’s almost the same kind of car-crash appeal. By which I mean, you’re watching people who ought to know better, making highly questionable choices, and paying the price for them. On one level, it’s utterly ludicrous. I certainly have questions about some elements: I suspect corpse disposal is harder than it seems here. Yet this is probably where the extended set-up works, in that you’ve been drawn in and become invested in these people. By the time they start acting like South American tribesmen, it’s too late to back out. You can only watch, as things get ugly, messy and gnarly. Ainslie does an excellent job of avoiding the usual pitfalls of movies about drugs, on either end, and I get the feeling this will stick with us for a while.