This is certainly one of a kind, and if not entirely successful, can only be admired for its relentless refusal to fit into any easy slots. It’s part mockumentary, part vampire film, part serial killer flick, and part arthouse meditation on aging and death in Hollywood. Landau (the daughter of Martin, and the film opens with family pics and other ephemera), is best known as Drusilla on Buffy the Vampire Slayer. Here, we meet her playing a tired, middle-aged and frazzled version of herself, making a documentary about vampires. This involves her quizzing Hollywood colleagues about, for example, the nature of evil. More or less subtly, those she talks to have all been linked to vampires in popular culture, e.g. Oldman, Ron Perlman, Anne Rice, etc. [Buffy creator Joss Whedon shows up: a bit awkward in light of subsequent events] 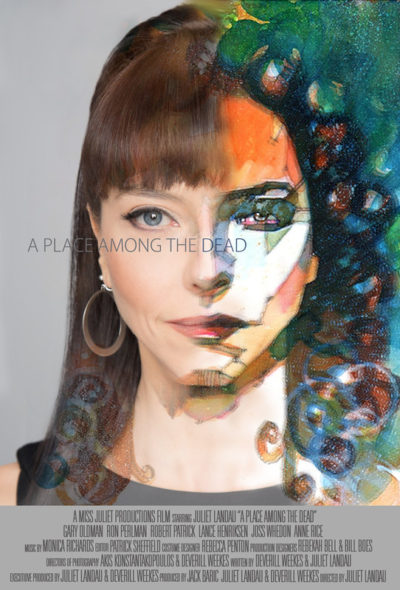 However, she ends up becoming involved as the police investigate a series of murders, where young women have been drained of blood. [It is an obvious and shaky narrative conceit, that law enforcement would let an actress just trot along beside them, for no particular reason] Juliet gradually becomes obsessed by the case, estranged from her other half (real-life husband Weekes) and convinced the murders are carried out by a centuries old vampire called Darcel. She tries to protect a victim (McDonald) and  eventually decides it’s up to her to take revenge for  the victims by… Well, frankly, going all Buffy on his ass. Except, that’s not quite as easy as it was in the TV series. No Scoobies. No Giles. And certainly, no powers, beyond those normally available to an actress in her forties.

It’s less linear than the above suggests, drifting off into soliloquies about the inner voice of self-doubt or whatever. If you don’t have questions when the final credits roll, you probably haven’t been paying enough attention. It feels like there is a lot to unpack here, and a second or third viewing might help, going in with an idea of what to expect. We had no real clue, and it took a while to get into the rhythm. If you don’t manage that, it could well end up seeming considerably longer – or “denser” might be a more charitable designation – than its 76 minutes.

On the other hand, the fragility of its connection to the viewer is a factor in the viewing experience. You have to put in conscious effort to sustain the connection, and be open to what Lamdau wants to show you. At times, this can be rough to the point of rawness. At others, it becomes almost head-spinningly meta, as when a club patron recognizes “Drusilla”. Landau doesn’t quite roll her eyes, though you sense she wants to. I woke up the next morning, unsure if I had actually watched this, or just imagined it. Up to you whether that’s a ringing endorsement or brutal condemnation.