Behind a very terse and up-front title, this is certainly a different take on the genre. It takes place in a rural area of Spain, beginning a decade or so ago when the “Red Demon” was terrorizing the area. But it’s a masked, psychotic killer with a moral code, leaving the locals alone, and instead preying solely on tourists and visitors. Turns out to be a family business, with young Julio idolizing his father, down to making a self-sized, cardboard version of the wooden mask his father wears (above). Fast-forward to the present day, and his mom, Carmen (Monaj) decides it’s time for Julio (Alguacil) to take up the mantle, and resurrect the Red Demon. However, the power in the mask comes with a price, and it’s not necessarily one Julio wants to pay.

This side of things is super. Few slasher films offer such a well-done insight into the process by which their killer becomes one. It’s nice to see things like Julio, despite his enthusiasm, struggling with his first kill (the method of which is certainly a new one). His qualms about whether or not to follow in his father’s footsteps provide additional depth, and among masked psychos, make him one of the more… Well, I hesitate to use the word “likable,” but here we are. The film’s problems are more on the other side of the equation, where the visiting group of victims, led by Lucas (Gallardo) and his girlfriend Ursula (Muñoz), run the gamut from bland and uninteresting to actively obnoxious. 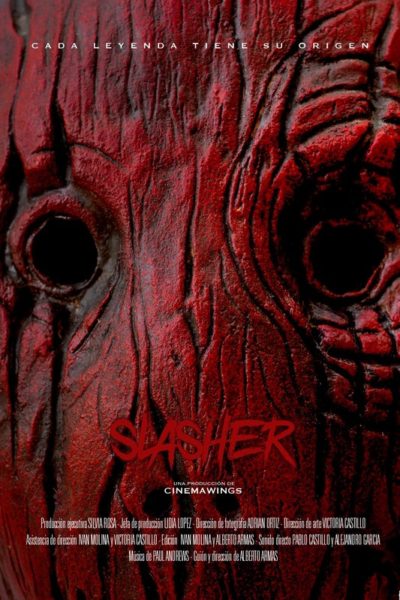 I suppose this could be the point. Yet every scene spent with them bickering about their relationships, taking drugs. etc. had me wishing the film would get back to the far more interesting topic of Julio and his situation. I will confess I did laugh at their efforts to appear “normal” during a visit by the local police, when off their face on ‘shrooms. In general though, they are only present as fodder for Julio’s coming of age. For example, with him torn between his desire for one of the girls, and the imperative (both genetic and through upbringing) to stab her repeatedly with a sharp object. That’s something to which we can all surely relate. Oops. Did I say that out loud?

Slightly underplayed is the notion, mentioned in passing, that the more people Julio kills, the more invulnerable he becomes, but the slower he is able to move. This is a genius idea: it explains a lot about the pace at which Michael Myers, Jason, etc. amble around in unstoppable pursuit of their prey. In the light of this, the ending makes a good deal of sense, and sets things up for a potential franchise that had me genuinely interested in seeing where it might lead. To use an old proverb, it appears that the family which slays together, stays together. If so, this nuclear unit should certainly be around for a few generations to come.